SINGAPORE — Here, it’s all about “the girls.” The dominant colors of the tennis court at the Singapore Indoor Stadium and the Gardens By The Bay attraction all emit one lady-like color: Purple.

With tennis, only the girls are invited. The top eight men will have their own season-ending ATP Finals in London; here in Singapore, it’s only the top eight women singles players and the top eight lady doubles pairings that have been welcomed. Even the Future Stars tournament for children 14- and 16-and-below are all-girls.

On Opening Night last Monday, the first match was the highlight: Ana Ivanovic and Serena Williams.

I don’t know if it was a mere coincidence but when Serena Williams stepped into the court and started to warm-up, would you believe the song they blasted on the loud speakers: “I Like Big Butts.” I doubt it if anyone noticed the vulgar song but, wow, what timing.

The WTA Finals couldn’t have asked for a better pairing: Serena is world No. 1 while Ana was formerly at the top. In their Australian Open meeting last January, Ana defeated Serena for the first time after eight meetings.

The American led early, 3-1, before the Serbian fought back and, at 4-all, earned a break point; but she missed an easy volley by inches. Deuce. That was the only chance for Ivanovic to pounce. She lost that game and the game thereafter, losing the first set, 6-4.

In the “point of the match,” Serena was ushered to the net by a short ball by Ana; a lob was thrown to the ceiling as Serena smashed the ball hard; but waiting by the baseline and with a high jump, Ana smashed the ball in reply for a winner. A smash counters a smash!

The contrast between the two was captivating. Ana, soaring tall at 6-foot-1, is slender. She moves like a gazelle. Serena is a few inches shorter but is stocked with might and muscle.

The biggest advantage of Serena? Her serve. It clocked up to 194-kph and would give her one or two free points each time she serves. She can also split! A couple of times when she had to sprint to the side, she’d stretch, extend and split. Outstanding flexibility.

In the 2nd set, Ana gained an early break but it quickly evaporated. When she served to remain in the match at 4-5, she double-faulted. Down match points, she succumbed to the indomitable Ms. Williams. Final score: 6-4, 6-4. 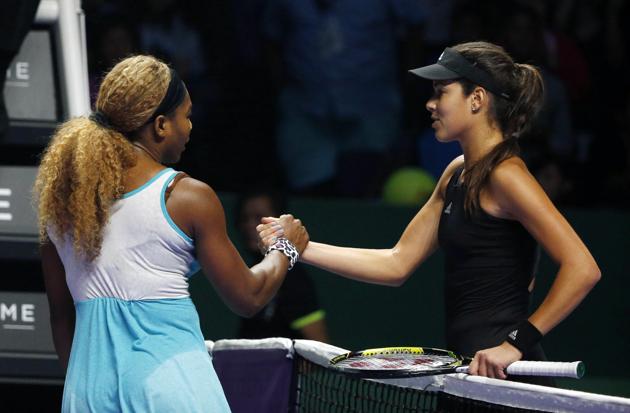 In Game 2, it was Eugenie Bouchard vs. Simona Halep. Of the eight ladies competing, these two are the only “rookies” (first-timers) to the WTA Finals.

I was hoping for a Bouchard victory. Instead, she was spraying errors all over Singapore. Only 20, she plays with the reckless abandonment of a youngster. At the other side of the net, Halep was as steady as a wall, hardly making any mistakes. Plus, she had a large contingent who flew all the way from Romania. They were loud and they motivated the diminutive 5-foot-6. In the end, it was an easy romp for Halep, 6-2, 6-3.