The word has two meanings. In Tagalog, “puso” means “heart.” In Bisaya, it’s pronounced in a stronger manner: PU-SU!

To us Cebuanos, we know the meaning of “puso.” It’s our favorite dish with lechon. We eat puso during parties. We bring bundles to the beach. Every important Filipino-style, get-your-hands-dirty event involves this hanging rice.

“Puso is rice, yes, but it is more than that,” said an article in wayblima.com entitled, “The Art of Hanging Rice.” It added: “Puso is an integral part of the barbecue culture of Cebu, and I would go so far as to call it an art. Puso is to the Cebuano what the baguette is to the Parisian, or the bagel is to the New Yorker.” 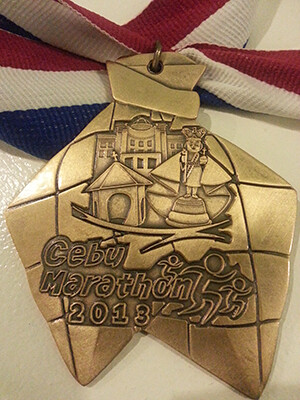 Well-said. Why this talk of the puso? Because, after three years of the Cebu Marathon when the 42K finishers received their mango-designed medals — now the CCM medals have a different look.

Puso. Yes, if you haven’t seen the photo yet, visit Facebook or the website (cebumarathon.com) and gaze at it.

Why the puso? When Meyrick “Jacs” Jacalan, our Cebu Executive Runners Club (CERC) organizer who was responsible for the iconic mango design, thought of a different look for 2013, he rattled-off several options. (One interesting option was a lechon runner!)

Shifting to Tagalog, it also takes a lot of “puso” (heart) to run from the Cebu I.T. Park to the Capitol to the City Hall to the Tunnel to the SRP — all the way to Talisay — and back to Lahug. That takes sacrifice. That entails eating pain and suffering and offering tons of prayer when one passes the Basilica Menor del Santo Niño. That takes heart.

And so, Bisaya or Tagalog, the word “puso” is the perfect representation of next Sunday’s reward. A “puso” for the “puso” (strong heart) of the marathoner!

PRESS CON. We unveiled the medal last Thursday. When the CERC members and media personalities gathered in a long table, guess what was served in Mooon Cafe, our family-owned Mexican-inspired restaurant?

Of course, the puso. The diners were puzzled. Does Mooon now offer puso? Our CERC group — Roy Trani, Kenneth Casquejo, Jesse Taborada, Rudy Tindugan, Dr. George Evangelista, Barry Marquez, Raffy Osumo, Annie Neric and Dodong Sulatre — aware of the surprise, didn’t comment. Together with pork barbeque, we just munched and ate. Finally, when the press-con started, I joked to the group, “It’s not true that Mooon now offers puso…” Then we unveiled the medal made by Suarez Arts.

ONLY 42K? Now on our fourth year of organizing CCM (we had two Sinulog half-marathons earlier), our CERC group has decided to stick by tradition. We know plenty complain. My mom — who’s done several 21Ks and a 25K — was one of those. Why don’t the 21K finishers get medals? (All 21K and 42K finishers, though, will receive Finisher’s Shirts.)

It’s a tradition that’s started and a tradition that will continue. That’s why, as each year progresses, the number of 42K participants increases or is maintained. This year, we’ll exceed over a thousand 42K runners. We want the 21K runners of this year to aim more, go farther, train twice as much — to make that moment when the medal is draped on one’s neck even sweeter.

With every-Sunday races in Cebu today, collecting medals is no longer a rarity. Many runs offer medals. We’d like for the Cebu Marathon “puso” to be one of the most treasured of metals in your cabinet.

This, therefore, is a challenge to all runners: Go for that full marathon at least once in your life. If not next Sunday, maybe in 2014.