The biggest annual team sporting event returns to Cebu. Backed by a 112-year-old history, the Davis Cup is one of sport’s oldest and most revered of competitions. It pits nation vs. nation in the sport of that matches forehands versus backhands.

This February 1 to 3, 2013, the shores of Plantation Bay Resort and Spa will once again host the Davis Cup. Cebu is lucky. Last year, we were fortunate to organize two DC ties: Phils. vs. Japan (March 2011) and Phils. vs Chinese-Taipei (September 2011). One-and-a-half months from now, Team Philippines will face Syria.

It wasn’t supposed to be here. Syria was scheduled to host our Pinoy netters. But we know the bloody situation the country is in now — thus, the move to our Southeast Asian nation. 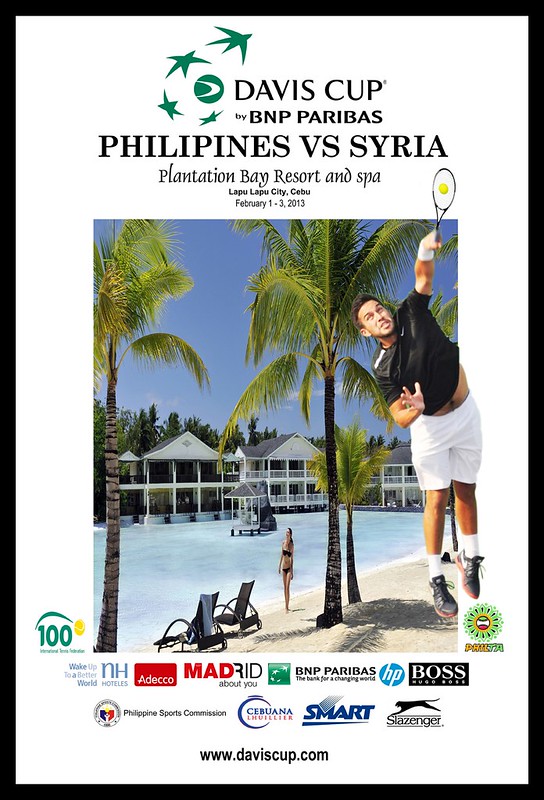 Tickets will be sold — for free! This is the big news. Plus, here’s another one: While we lost both 2011 contests, the one this February favors us. On paper, led by world-ranked (doubles) No. 35 Treat Conrad Huey, we are expected to win. That’s why, at yesterday’s MOA signing and press conference at Plantation Bay attended by Mayor Paz Radaza, Philta’s VP Randy Villanueva, Lapu-Lapu City Councilor Harry Radaza, Plantation Bay GM Efren Belarmino and Cebuana Lhuillier’s big boss Anton Arrieta, the sign we flashed wasn’t a thumbs-up or victory symbol — it was the “No. 3” sign. It was to signify, on Cebu’s 3rd attempt, that we hope to emerge victorious. (Harry predicts a “third time lucky” event; we can also call it “third time’s a charm.”)

Our players? Three are almost-sure to be selected: Treat Huey, Ruben Gonzalez and Johnny Arcilla. The fourth spot will be decided among the trio of Niño Alcantara, Jeson Patrombon and Onyok Anasta.

Like in previous occasions, the format of the Davis Cup weekend is the same: Friday (Feb. 1) will offer two singles matches; Saturday is for the lone doubles match; and Sunday are the two reverse singles matches.

Lapu-Lapu City — because of the Cobra Energy Drink Ironman 70.3 and the Davis Cup — has risen to become a sporting powerhouse city. Led by their sports czar, Harry Radaza, the city has asked another sports enthusiast (and ultra-marathoner), Hembler Mendoza, to lead their efforts in sports and tourism. The year 2013 promises to be loaded with events for the city named after our country’s first hero.