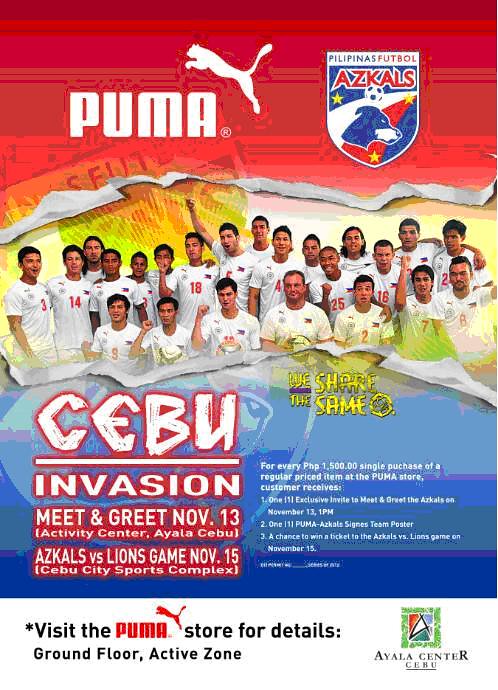 Paolo Pascual is excited. The goalkeeper of the Azkals — and a true-blooded Cebuano — calls this week a “dream come true.”

When I spoke to Paolo yesterday morning, he was in Cebu. But he wasn’t at home with his parents, doctors Joel and Chona Pascual. “We’re in Parklane Hotel where the team is staying,” he said. “Although I’m home, I have to stay with the team.”

The “team,” of course, is the most popular team that has invaded the minds and hearts of all sports lovers: the Philippine Azkals.

This week in football has never happened to Cebu before. It started with the opening of the 15th Aboitiz Cup last Sunday. That same day, a group of about 30 athletes and coaches arrived via PAL around 1:30 P.M.

Paolo Pascual is the lone home-grown Cebuano. He mentions that two others — Patrick Alcala Reichelt (who’s mom is from Alcoy) and Ray Anthony Pepito Jonsson — are also “Cebuanos.” But, since he’s the full-blooded Bisaya, everybody is asking Paolo the same question, “Where do we go?” Show me Cebu! all his teammates insist.

Upon arrival last Sunday, the team was whisked to the Aboitiz Cup opening. “Although it was rainy and muddy,” said Paolo, “we had a wonderful time. So many people, especially children, came.”

That night, they were treated to dinner by the president of the Cebu Football Association, Ricky Dakay, at The Distillery in Crossroads. Stanley Villacin was with the group.

But if we think that this trip is for sightseeing or party-going, that’s not the case. “We train at the Ateneo-Sacred Heart field. Our focus before the game is lots of training,” said Paolo.

CCSC. “It’s the best football field we’ve had at the Cebu City Sports Center,” said Ricky Ballesteros, the facility’s chieftain. Months of preparation — plus the assistance of the “grass experts” from Alta Vista and Cebu Country Club — have elevated the stadium. “We’re also lucky that the rains have been pouring,” said Ricky. “This time, the grass has really taken root. Ni gamut gyud. Green na kaayo ang field.”

Ricky expects over 7,000 spectators to flood the CCSC on Thursday. His advice? Come early. “We’re open starting 3 P.M. Also, please don’t bring your own vehicles. Ask to be dropped-off or take a taxi. This will help decongest the traffic and parking.” Although Citom will allow one-car parking on both sides of Osmeña Blvd., it’s best to lessen the number of parked cars. Or, parking at E-mall or nearby establishments is another alternative.

GRAEME. On the beauty of grass field, I got this mesage from Cebu Sports Hall of Famer Graeme Mackinnon, who’s joining us here this week:

“My lasting recollection of Cebu City Sports Center was that it sat firmly in the too hard basket. No one wanted to do anything to upgrade it. It was a dangerous dust bowl and needed political will to renovate and maintain it. Or did it?

“Maybe it needed the phenom that is the AZKALS and the promise of international football to spark Cebu from its lethargy. Led by the vision of Ricky Dakay, the CFA has transformed the dust bowl into an oasis. But is this transformation just a mirage? The complex has now been upgraded and handed to the current administration on a silver platter.

“With what I saw on Monday night, I was blown away with pride at the transformation. I hope the transformation will not be blown away due to a lack of vision. The game with Singapore will be fiesta-like and something Cebuanos will be proud of. But please don’t make it a one-off and put the CCSC back in the too hard basket.”

“PUMA brings the Azkals to Ayala Center. For those who can buy at least P1,500 worth of PUMA items, they will be given a poster that the Azkals members can sign (with a photo-op) at 1PM at the Activity Center. The following will be there: Eduard Sacapaño, Roel Gener, Jason Sabio, Nestorio Margarse, Chieffy Caligdong, Ian Araneta, Joshua Beloya, Chris Greatwich and one of the Younghusbands.”