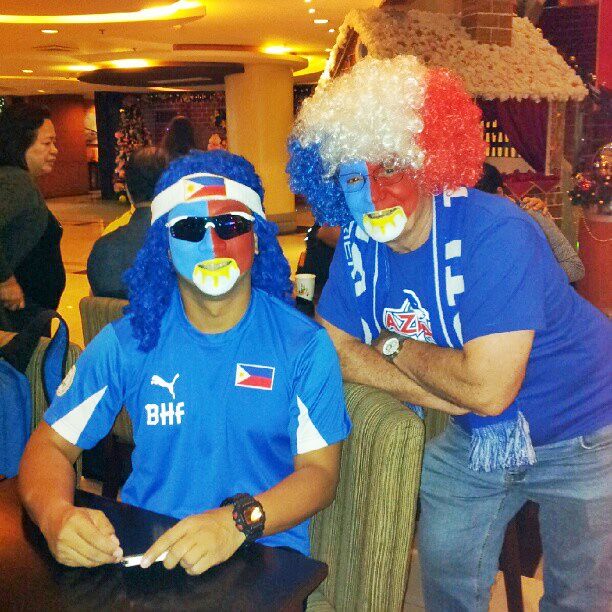 Historic. A first. Football fever. Loud. Unprecedented. Call it whatever term you want but this fact is obvious: Today — Nov. 15, 2012 — will change football in Cebu.

“Since I am biased for football,” said my boss on these pages, editor Mike Limpag, “I think this is the biggest event here; though the Cobra Ironman 70.3 could also make a claim for that. But since this is the first time that the Philippines will play an international friendly here on a Fifa match day (other countries will be playing friendlies, too, on Nov. 15); so this really sets the bar.”

Last June — just five months ago — over dinner at the famed Marco Polo Hotel, a group of passionate footballers talked about holding an international meet here.

Ricky Dakay and Dan Palami, together with the Cebu Football Association (CFA) officers, sat in a large table with Mike Limpag. Is Cebu ready? Will the Cebu City Sports Center venue be in decent shape? Can the grass grow on time? Can we organize this gargantuan task in just a few months’ time?

The answers? Yes, yes, yes, yes. So, yes, here we arrive today. As a sports lover, I’ve never seen such buzz. For tonight’s Philippine Azkals versus Singapore Lions football game isn’t just for football fans. It’s not just soccer dads like Ariel Uy and Harry Radaza or for coaches like Joshua Fegidero and Dennis Peñalosa or for CFA officials like Glenn Quisido or Mike Veloso.

Tonight is for all fans. Sports fans. Fans who like gazing at players with movie star good looks. Cebu fans. In fact, most of the spectators tonight will be witnessing — myself included — such a large-crowd football event for the first time. Imagine over 7,000 screaming fans?

“For me, the noise-level when Stephen Schrock scored the first goal in that 2-1 home loss against Kuwait at the Rizal Memorial Stadium was really something… 13,000 fans screaming at the same time,” said Mike Limpag. “There will be half of that at the CCSC pitch, but because of the design and the adjacent buildings, it will be noisy. A group of Kaholeros led by Egay Salvacion have been practicing for weeks now to help lead the chants, and I think they will be able to get the crowd going.”

PRESS CON. I attended yesterday’s “face off” between the two head coaches, led by our own, Michael Weiss. Also in attendance were captain Chieffy Caligdong and three Cebuanos, Paolo Pascual, Ray Jonnson and Patrick Reichelt.

The impact of this event is huge. “The positive impact has began,” said Mike Limpag. “Even days before the friendly, when somebody posted a picture of the CCSC field.. the photo went viral… some were asking if the CCSC field uses artificial grass.

“With a field like this, people are suggesting that more games should be played here. Also, the Philippines is one of two countries shortlisted to host the AFC Challenge Cup game and because of what Cebu has done, some are saying that Cebu should be considered as host.. The Challenge Cup needs two stadiums, one could be the CCSC and the other, the soon-to-be finished stadium in USC.”

NIMROD. One of the key personalities of this event is Nimrod Quiñones, who commented: “This is like a dream come true for me as I have long wished for an international football event in Cebu. As a member of the CFA board, it was quite hard to put all the preparations together with only two months given to us, but several people have come forward to help us get things done. This is not just an activity of the CFA, but the whole Cebuano community. I hope that the fans would do their share of making this successful by keeping the place clean and by behaving.”

RICKY DAKAY. The man who deserves the loudest applause is Engr. Pericles Dakay (you can also call him “Doctor” as he finished a Doctorate in Engineering in the US). Ricky is a Rotarian, a family man, a civic leader, a businessman (head of the Dakay Construction), but his most important role today is as president of the CFA. All thanks to Ricky. If not for him and the new CFA Board — and that dinner talk last June — we’d be at home early tonight watching ESPN.