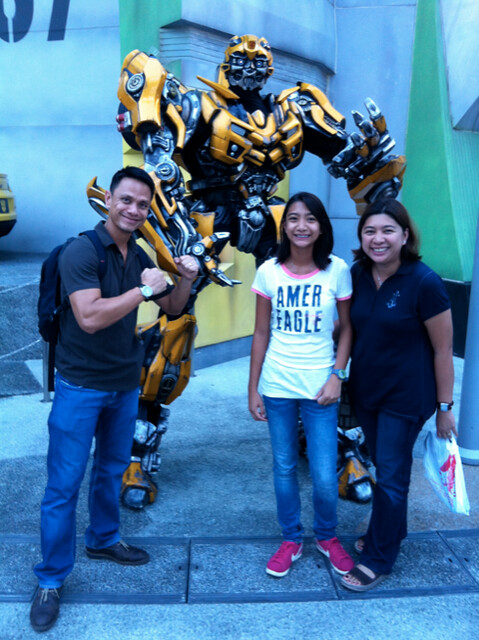 SINGAPORE–Yesterday morning at 5:40, I woke up. At this hour here in Singapore, it’s still dark. It felt like 4 A.M. But I got up, dressed, tied my Asics Gel Kayano 17 and jogged towards Orchard Road.
Singapore is clean. Sure, debris litters the asphalted streets–but these are not plastic wrappers or sprinkled garbage but leaves that have fallen from trees.

To many who’ve traveled to this Lion City, this fact you won’t refute: Orchard Road is not only Singapore’s main road (much like our Osmeña Boulevard), but this nation might as well be called Orchard Country.
Singapore is an orchard; it’s all green. As soon as you disembark from the plane and traverse towards the city, all you see is green. Here, trees abound in every corner. Singapore is a forest, a Shangri-La of plants.

What else is here now? Banners proclaiming a giant-size event that is about to rock this nation of 5.1 million people: the Singapore Grand Prix.

The only night race of the Formula One season, the Singapore F1 will be held on September 23. But it’s not only a one-night party–because that entire week is an entertainment feast: Katy Perry is performing, so are Maroon 5 and, if you’re an ‘80s fan, Bananarama and Pretenders.

With only two weeks left, Singapore is revving up its city engines, awaiting the influx of tourists-including my brother Charlie, Mitzi and dozens of others from Cebu–to revel in the race. (In a Puma store at the [email protected] mall, the diehard Ferrari store not only has plenty of red shirts plus BMW apparel, but they’ve also got a new Mercedez Benz-Petronas line featuring Nico Rosberg.)

Jenson Button? Remember him? Cebu’s recent visitor is not in Singapore–not yet–but surely, he’ll be here to try to win. A few weeks back when we had a chance to have dinner together, Jenson talked about this place.

“The Singapore race is amazing,” he said. “It’s very humid. You’re sweating so much. And, because it’s night time, sparks from all the friction light up the track. It’s completely different from the other races.” (Jacs and Perl Jacalan, our companions during that dinner, told Jenson that they’ll be in Singapore for the race. VIP passes? I joked Perl.)

More on F1: Two days ago, guess who won the Belgian Grand Prix? I heard the news from a good friend; the first message I read when I opened my phone yesterday.

“Jenson just won the Belgian Grand Prix, Bai. He has never won there before. Must be the Cebu Ironman training. Hehe.” Ha ha. Maybe! That message came from Vincent Ong of Globe Telecom who also joined us in that get-together with Jenson and his team, including his girlfriend Jessica Michibata. True. Jenson’s hard-charged triathlon racing–while everybody else was in the beach vacationing–might have helped him. (Will write a full story on this very humble superstar soon.)

MALAYSIA. As you read this today, Jasmin and I are flying to Kuching, Malaysia to accompany our 13-year-old daughter Jana for her first international tennis competition.
Jana will join the 8th Sarawak Asian Under-14 Tennis Championships, competing with others from Malaysia, Indonesia, China, Hong Kong, Uzbekistan, Singapore and India. From the Philippines, three girls and three boys will represent us, including Cebu’s star, Iggy Pantino.
After the Kuching/Sarawak leg, we fly to Kota Kinabalu for the 3rd Sabah Asian U14 Championships, to be held at an 11-court facility at the Likas Sports Complex.
The past three months, Jana has been practicing hard for Malaysia. We got a scare two weeks ago when, midway through a practice session, she limped. We cut short her training after she complained of knee pain. We rested for a few days. Then, she joined her teammates from Bright Academy (Shyne Villareal, Anday Alferez and Stephanie Kim) as they won the Girls high school title of the Milo Little Olympics. After, she practiced again.. but the pain persisted. We visited Dr. Tony San Juan who attributed Jana’s growth spurt (she’s now 5’4 ½”) and heavy, almost-daily practices on hard-courts for the slight knee injury. More on Malaysia tennis soon…