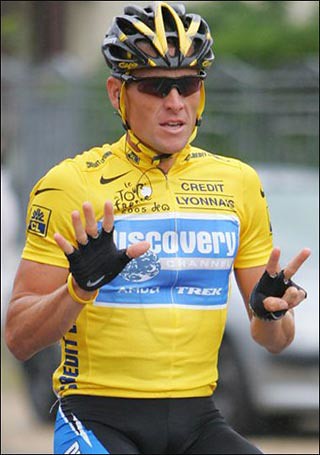 We don’t know the truth. He may have. He may have not. Nobody but Lance Armstrong knows the truth. But, this truth we know: Among the billions of inhabitants our planet has hosted, he is the greatest human being ever to pedal on two wheels.

Pele. Ali. MJ. Federer. Phelps. Bolt. The name “Lance,” without question, belongs in the same sentence as those revered icons.

Remember the LA story? He was scheduled to die. A world cycling champion by the age of 21, he succumbed to testicular cancer that spread throughout his youthful system. Doctors declared him dead. Or, at least, they gave him a 30 percent chance of survival.

Biking? Climbing the Pyrenees? Winning a race… any race? Ha. Ha. Ha. Forgot those. How about breathing? Standing up? Walking? He walked. He climbed the Trek saddle. He pedaled. Then, miraculously, shortly after that near-death moment, he wins the 1999 Tour de France. Not once or thrice–but seven times, the most of any cyclist. And more than that, he won them every July from ’99 to 2005. Seven straight.

We all know the Tour de France. It is the single most excruciating and painful of endeavors, UFC included. You bike everyday for 23 days (with only two days of rest in between). The total distance for those three weeks? About 3,500 kilometers–many of those climbing the steepest of climbs atop the Pyrenees or the French Alps.

But more than his accomplishments on the bike, his life’s more enduring impact was felt in the cancer community.

Livestrong, his foundation, was started in 1997. It will turn 15 years old in October.

Did you know that almost $500 million (that’s over P21 billion!) has been raised by Livestrong? Can you imagine the tens of thousands of lives that money has helped save?

Added a CNN report: “More than 100,000 people have engaged in an awareness-raising activity such as running, walking or riding in the name of Livestrong.”

To me, this is Lance Armstrong. The inspiration. And this is how I choose to remember him. Like my good friend Dr. JV Araneta, who wrote a beautiful piece (“A Champion Forever”) in The Freeman yesterday, I’ve long concluded this statement: Lance is a hero.

That’s why yesterday, while playing tennis, I wore my favorite “US Postal” yellow cap. And, two afternoons ago while mountain biking in Maria Luisa, I wore the black-and-yellow Livestrong jersey and cycling shorts.

Chris Aldeguer, who has followed Lance even before his ’99 TdF victory, has made the same conclusion. When I chanced upon Chris early Sunday night, we biked and talked about Lance. Chris’ words? Though it’s highly unusual for a fighter like Lance not to fight this legal battle, he knows that the USADA has made its “You’re guilty!” verdict from the very start… and so it’s useless to fight.

“I’m focused on the future,” said Armstrong after joining a mountain-biking race in Colorado. “I’ve got five great kids, a great lady in my life, a wonderful foundation that’s completely unaffected by any noise out there, and we’re going to continue to do our job. The people like the people who are standing around here or on the course, they voiced their opinion in the last 48 hours and are going to support us.”

Optimistic. Looking ahead. Pedaling forward. Regardless of the mountain to climb, that’s Lance.