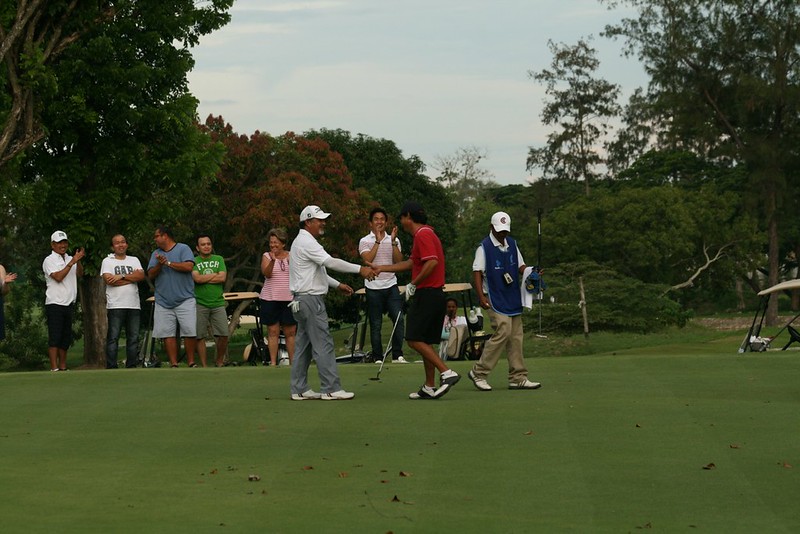 Moments after the winning putt, Eric Deen is congratulated by Montito Garcia

Whenever I need help with golf, I turn to two friends who are not only Class-A golfers but also skillful writers: Marko Sarmiento and Atty. Jovi Neri.

Last Saturday, I missed watching Eric Deen sink that birdie putt on the 37th hole to win the Club Championships of the Cebu Country Club. Thanks to Marko and Jovi, here’s an excellent report of last week…

“To no surprise, the top seeds after qualifying were LJ Go and Gio Gandionco, respectively,” wrote Marko. “They both shot a 2 day aggregate score of 2 under par (140). No one was surprised since the two have been playing well all year. They were our heroes of the PAL Interclub in Feb.”

Jovi concurred: “Lj and Gio are not just among the country’s top juniors but among the top five Filipino amateur golfers today.” But, guess what? For the first time, the top two seeds lost.

“Ever since CCC expanded the qualifying to be 16 players 11 years ago,” said Jovi, “this was the first time ever that a #1 seed lost to #16. I was also fortunate to beat the #2 seed Gio even though I was #15. In match play anything can happen, and it isn’t always the better man that wins, but the one having the better game.”

Marko Sarmiento, the 16th seed, upset LJ Go, 3 and 1, while Jovi beat Gio, 3 and 2. Said Marko: “It was my most satisfying win since beating Gene Aznar to reach the finals back in 2001. Lj didn’t play his best but still put up a tough match as I played near perfect golf. Jovi and I both struggled in qualifying, but the beauty of match play is anything can happen.”

Jovi credits the depth of talent in his club where, on any sunny day, anyone can beat anyone. He added that while the “young ones” were the stars in CCC’s PAL Interclub win, it was the “once young” who emerged winners last week.

In the quarterfinals, Jovi and Marko lost. “The high was short-lived,” said Marko. “I lost to Kiyofumi Takahashi 1 down and Jovi lost to Gen Nagai 2 down. Kiyo then lost to Eric in the semifinals and Gen lost to Mon.”

Here’s Marko’s summary: “When you reach the final, it’s more a battle of attrition than anything. It’s a 36-hole match with no golf carts allowed. Leading to the finals you play 5 out 7 days. Under the summer heat, it gets exhausting. The level of play goes down because of fatigue and in match play you match up directly against your opponent. If your opponent double bogeys, all you have to do is bogey.

“Mon told me that he was around 2 or 3 over after the first 18 holes which left him 3 up. Eric got off to a shaky first 9 but didn’t leave himself too far back. On the 2nd 18, fatigue was getting the better of them. Pars and bogeys were winning holes. Eric cut Mon’s lead to 1 after 27 holes.

“In the back 9, Eric seemed rejuvenated while Mon started to fade. Mon relied on his hot putting all week but couldn’t get one to drop in the final 9 holes. Eric built a 2 up lead with 2 holes to go.

“Closing a match is always the hardest part of match play, similar to holding on to your serve to win a match in tennis. Eric bogeyed the last 2 holes vs Mon’s pars to send the match to sudden death.

“After 8 hours of golf, they were back to even and headed for the 1st hole. Both hit perfect drives and good second shots. Mon left himself a 12-footer for birdie while Eric had a 7-footer. Mon putted first and barely missed but Eric made no mistake and birdied to win!

“The first birdie between either of them from the last 18 holes of play. Pretty amazing considering the number of birdies that were made leading up to the final.” 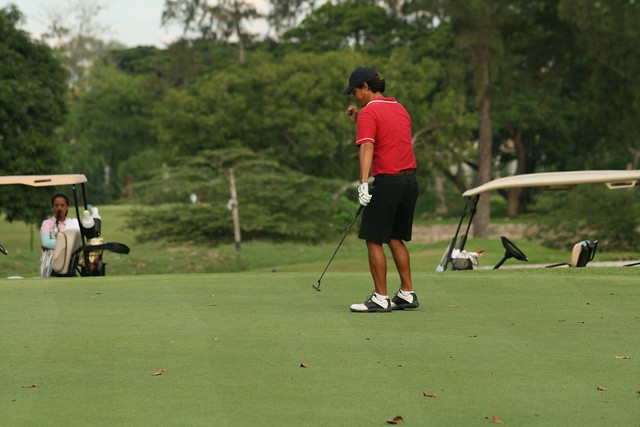 Footnote from Atty. Neri: “The teenager who reached the furthest was 15-year Gen Nagai, who made the semis but lost to Montito. The next day, he joined Casino Español’s Copa De Golf and shot a personal best 7-under par 65 with 8 birdies against 1 bogey! His gross score was good enough to beat the net scores of everyone!”