Cebu’s reigning SAC-SMB Sportsman of the Year awardee is also one of the pillars behind the Hoops Dome in Mactan. Two days ago, he was inside another dome.

Councilor Harry Don Radaza of Lapu-Lapu City is in the U.S. with his wife Mayann and son Zach. They watched the L.A. Clippers battle the Memphis Grizzlies.

“Game 4 was one of the best games I’ve seen live,” said Harry. “Chris Paul and Blake Griffin combined for 57 points. Even before getting to Staples Center, just looking for a parking spot, you feel the craziness in the streets. Everything within half a kilometer of Staples Center was decorated with Red and White, the Clippers’ colors. They also gave everyone free red Clippers shirts.” 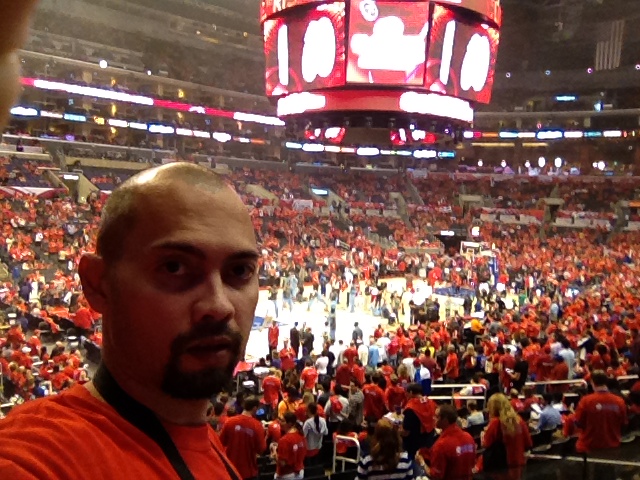 Harry is not an NBA neophyte. While residing in America prior to Mactan, he watched plenty.

Blake Griffin amazed Harry the most. “He had several monster dunks. It seems EVERY time Blake gets the ball on the run, the crowd is on its feet gasping for that big dunk which never fails to energize the whole stadium. His pure vertical leaps get the crowd going. Although for him to have a good career, he needs to develop more post-up moves and a consistent mid-range jumper. Right now, he’s just relying on his hops. It’s smart not to be one-dimensional and predictable.”

On Chris Paul, Harry sat applauding at how well he distributed the ball and “took over in OT when Blake fouled out. Now that’s a point guard!”

Playoff tickets are difficult to secure. Harry bought theirs from eBay (paying $190 for a $150 ticket); sitting 25 rows from the court—excellent seats for the price. As they sat down, Harry laughed, saying: “My 7-yr-old son Zach commented that he likes the Hoops Dome better because he gets to sit in the middle courtside seats! LOL!”

What surprised Harry the most was how the Clippers fans hate the Lakers fans, and vice versa. “Any sign of the yellow Lakers at the Clippers game and you would get verbally abused by the fans!” he said.

Harry has seen Michael Jordan play. One future legend that he wants to watch this month: Kobe. “After OKC made it and the Lakers up, I’m trying to rearrange my itinerary to catch at least one game of Lakers/OKC.  Kevin Durant looks like the prototype for the future of NBA players: tall, mobile, shoots the ball and drives to the hoop.”

Between the Oklahoma City Thunder and the Lakers, Radaza expects the former to win. His Finals prediction? “Miami vs. OKC! Two explosive teams hungry for the championship. Although Miami might have the edge in defense.”

When I queried him for his top NBA picks, he rattled off three superstars.

No. 2 on his list is Derrick Rose (“amazing work ethic and very quiet and humble. He just shows up to simply play.”)

Finally, of course, everybody’s hero: Jeremy Lin. “He is your typical underdog personified. He toiled so hard at the end of the bench hopping from one team to another just waiting for that one chance. Reminds me of my favorite quote, ‘It is better to be prepared and NOT have the opportunity than to have the opportunity and NOT be prepared.’ He proved that anything is possible.”

Rubio, Rose, Lin. The weird thing about them? Said Harry: “They all went down with knee injuries!”

Back to Cebu, the councilor added: “I went there as a fan, but I couldn’t help seeing several things which we might be able to bring back to Lapu Lapu City in terms of how organized they were, the safety and security, the atmosphere, etc.”

Next up? “After the Lakers/OKC series will be Pacquiao/Bradley in Vegas!”