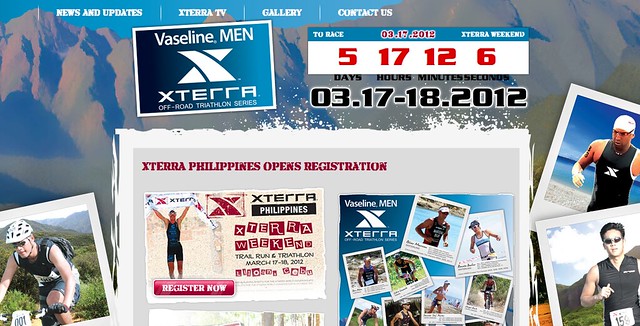 This 2012, the “Year Of The Water Dragon,” Cebu will host two major triathlon events: the Ironman 70.3 in Mactan and the XTERRA Off-Road Triathlon. While the Ironman 70.3 — a major loss for Camarines Sur — is still this August 5, the XTERRA is happening on March 18. That’s seven mornings from today.

What’s XTERRA? It’s off-road. It’s mountain-biking instead of the road bike. It’s a trail run. It’s more adventure than speed. And, best of all, it’s happening here, at one of the most scenic real-estate projects of our island, where the sea and sun beckon for free: the Amara residential community in Liloan.

I’m joining. A mountain-bike fanatic, how can I not? While others travel to distant locations to participate, the Cebuanos are lucky that this event of Fred Uytengsu, Jr. is being organized in his home place of Sugbu.

The XTERRA Lite. That’s the event I’m joining. Unlike the full XTERRA Triathlon with a 1.5-km. swim, a 35K bike and a 10K run, the Lite version only has a 500 meter swim. The bike distance is the same while the run is cut to 5K.

Why the Lite? I have zero background in open-sea swimming. The only time I tried the Tri was a couple of years back in the “Pipti-Pipti” race and Joel Garganera and myself were holding on the buoys and rope (and to our lives!) in the short 300-meter swim. There are 49 of us joining the Lite. For the full version, 171 have confirmed.

This is not all. There’s also the XTERRA Trail Run. This happens this Friday, the day before the triathlon. Only 69 have registered so far and, Cebu being such a huge running haven, I’m surprised that hundreds haven’t enlisted. The Trail Run, with choices of 5K, 10K or 21K, is all-adventure. You’ll climb short hills, jog on grass, step over boulders and bask in the terrain of the country’s newest trail run playground called Liloan. Registration is still open.

Yesterday, thanks to Tyrone Tan, who owns a beautiful, overlooking-the-sea property in Amara, several of us congregated at 6 A.M. to do a simulation run. We swam. (Well, they did; I swam-and-stopped, pausing often to “acclimatize.”) We biked the full two loops. While biking, I high-fived a child/spectator and fell on hard cement. (My butt is still sore as I sit typing this.) We also did a short run. Igi Maximo, Bernard Palermo, Dodong Sulatre, Tenggoy Colmenares, Meyrick Jacalan, Joseph Miller and several more joined. Regan King, Niño Surban and another group also did the bike trek.