We watch sports to be entertained. Last Sunday, we got entertained by a different type of sport. The athlete? She sported a tattoo.

Charice. In her first solo concert in Cebu, two “negatives” I can mention. First, few people showed up. When the concert started, 60 percent of the Waterfront ballroom was empty. Shocking! But it wasn’t surprising. The organizers hardly marketed the event. I didn’t even know about the event until my sister Cheryl reserved tickets. (Also, I’ve never seen so many scalpers prowling the lobby.) The other “bad” part? Charice’s image. Unlike the sweet and cute teenager that we’ve seen on Oprah and with David Foster, this time she has the “edgy” look: gloves, leather jacket, dyed hair covering her face. (With her change of look/image, she didn’t even sing a single Celine Dion song!) 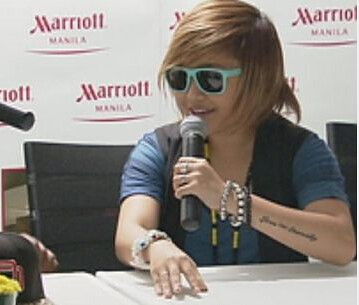 Still, seated seven rows from the stage and together with 10 other family members, it was an entertainment blast.

Charice opened with David Guetta’s “Without You.” She spoke in perfect Bisaya, “Maayong gabii kaninyong tanan.” Admitting that she was nervous, (“It’s my first time back since I came here for the ‘Little Big Star’ contest,” she said), Charice is a world-class performer. She did renditions from Michael Jackson, Adele, Bruno Mars and she sang Justin Bieber’s “Baby.” The sentimental part was when she recalled the death last year of her father (“I never got to perform in front of him”) and sang Eric Clapton’s “Tears in Heaven.”

The best part? Of course, when Iyaz appeared on-stage for “Pyramid.” Iyaz then did several solo songs and got the seated audience standing and dancing.

Ending? Whitney Houston’s “I Will Always Love You,” to which Charice added… “I will always love you… Cebu.” It was a blast. Sayang that few people watched.