The Congressman from Sarangani has always been good. He’s good at boxing—winning his last 15 bouts. He’s good at accumulating wealth—earning $20 million per 36 minutes hopping on the ring. Manny is good at strumming the guitar and singing Dan Hill’s “Sometimes When We Touch.” He’s even good at attracting many of the world’s celebrities to be Pacman fans—Mark Wahlberg, Kobe B., Paris Hilton, the Boston Celtics, and Barack Obama all count as his admirers and friends.

But, as good as Manny has been inside that boxing square and around the entertainment circles, we also know he’s been bad.

Manny gambles money. He keeps a squadron of fighting cocks. He sleeps inside the Casino with both eyes wide open. Prior to his 2007 fight against Marco Antonio Barrera, a few friends from Cebu swear by his late-night exploits inside the exclusive sanctity of the Waterfront Hotel and Casino.

That’s the bad. The good news? Manny is reading the Good News. Yes, I mean, the Bible. In a recent TV interview with Dyan Castillejo, Manny confessed to his sinful ways and vowed to change and become a renewed Christian. 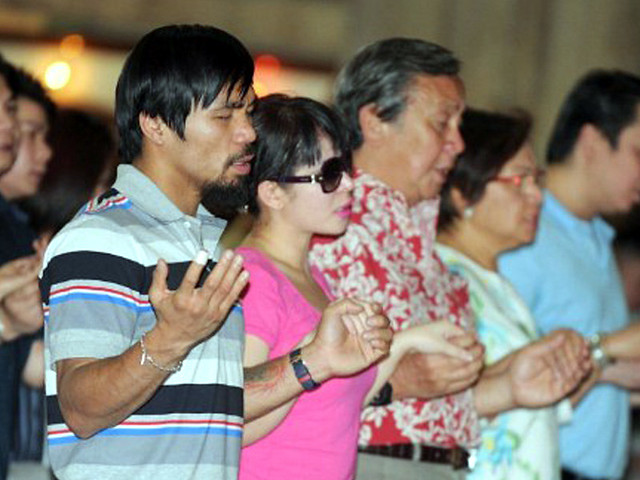 “‘If I had died last year or in the last 2 years,” said Manny, “I am sure I would’ve gone straight to Hell. My faith in Him is there 100 percent but behind it, I was still doing evil.”

Manny relates the story of having a dream after the Juan Manuel Marquez fight last November. He was amidst the forest when a bright light stopped him with the voice, “Son, why are you going away from me?” He woke up from the dream crying and soon opened the Bible.

Translated in English, Pacquiao said in that interview: “In the old times, the Lord talked to people through their dreams. So I said, my dream is real. I have to change my life. Maybe it was God calling because he knows what’s in my heart, that I believe in Him but still do bad things, things that don’t please Him.”

The quick learner on the ring, he quickly changed his ways. In an Inquirer Mindanao story, “Friends say Pacquiao is a changed man,” by Aquiles Zonio, it says:

“Mayor Reynaldo Constantino of Malungon, Sarangani, a close political ally of the Sarangani representative, said that recently, Pacquiao sold a casino he operated in a five-star hotel in Manila and divided the proceeds among the affected employees.

“Pacquiao then disposed of his fighting cocks at his sprawling MP Farm in Malungon. He gave all his game fowls to his close friends. The guy is really determined to change for the better,’ Constantino said.”

In Gen. Santos City, at a place we visited during a Rotary District Conference two years ago, Pacquiao closed the J-Mix Restaurant and Bar. They used to frequent his bar for drinks and billiards. Also, said the Inquirer story, MP now keeps only one cellphone—without any password; which means Jinkee can view his messages freely.

“The power of the word of God has changed Manny,” said Jinkee. Daily, he prays and reads the Bible with the guidance of a pastor. Has Manny changed religion?

“He told me that he is still a Catholic,” said Bishop Dinualdo Gutierrez. “He admitted that the one conducting daily bible service in his home is a Protestant pastor. So, I gave him a daily scripture guide and I directed a priest from a parish near his house to lead the conduct of a bible study.”

Said MP himself: “Being a Christian means accepting Christ as your saviour, your God. That is why you are called a Christian. If you remove ‘Christ’, there’s only ‘ian’ and that means ‘I am nothing.'”