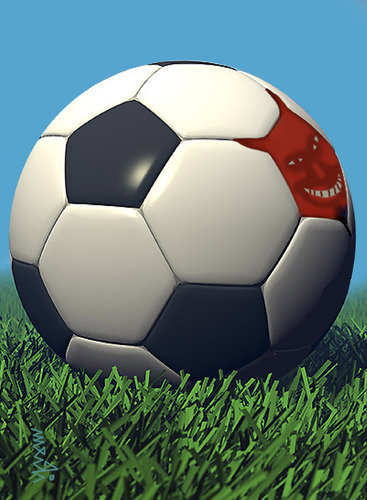 Yesterday’s article by sports editor Mike Limpag was like a Lionel Messi kick: it was direct, straight, razor-sharp.

The biggest losers in this controversy between the Cebu Football Association (CFA) and PAREF-Springdale? The children. They’re innocent. They just want to play.

Here are some questions: Was CFA correct to forfeit Springdale? When, according to Springdale parents whom I spoke to, the players were at the gate when the 15-minute extension expired? Upon seeing the players at the entrance, could they not have been accommodated and given the go-signal? (I can imagine the pain in the eyes of the children; you sprint to the venue, all-excited, and, at the last second, are denied to play. Your coach argues. The referee sticks to his ruling. Parents complain. Officials rebut. It’s all chaos.)

But, on the opposite side, wasn’t CFA just enforcing the rules? Doesn’t the rule state that you have to be ON THE FIELD on or before the 15th minute extension time? (I can imagine the referee looking at his wristwatch and, upon the tick of that 15th minute, blowing the whistle to announce the default… CFA argues that the referee was just doing his job.)

Here’s one more: Isn’t it also unfair to the opposing team to “accommodate” another team for being late, even for just a few seconds?

In all this: Who’s right? Who’s wrong? It depends. It depends on who you’re talking to.

Springdale will say: They’re biased. We were there! Why couldn’t they just let us play?

CFA will answer: Rules are rules! An extension was given and the time expired.

Here are more questions… Was Springdale’s reaction to withdraw ALL of their teams from the 14th Aboitiz Cup not exaggerated? Did they not anticipate a harsh rebuke? Did Springdale decide on their forceful “let’s-all-withdraw” act purposely to incite a fight with the CFA? Surely, they anticipated, pulling out midway through Cebu’s most prestigious football event will have severe repercussions…

Talking about “severe,” here’s one query, this time, for the CFA: Isn’t the three-year ban too harsh? Imagine banning one of the country’s most successful football programs for three years?!

Wow. How do you explain this to the hundreds of athletic and eager and active boys of Springdale? You can’t. Now, while I believe Springdale was too hasty on their “let’s-withdraw-from-Aboitiz” move, wasn’t CFA also guilty of the same? Thirty six months! Banning the children? This is preposterous.

I saw a copy of the letter from CFA President, Engr. Richard Montayre, addressed to Ric R. Ampiloquio, Executive Director of PAREF-Springdale, and, true enough, it stated a specific provision of the “3 years up to life time ban…”

First of all, this “banning for three years or more” ruling is crazy. I know, I know. The CFA Board will say… this is done to prevent teams from just brazenly pulling out. True. But here’s a question…

Why wasn’t a formal inquiry or meeting conducted prior to the tyrannical 36-month ban? I mean, how difficult is it to call together both parties and talk?

Was this not done because, as Mike Limpag pointed out yesterday, there’s a deeper, underlying conflict between the two camps, CFA vs. the Cebu Amateur Football Club (CAFC) included? I think so. Because if there was no “bad blood” between the two, this issue could have been settled amicably.

CFA could have called Springdale for a meeting and explained the possible harsh sanctions. CFA could have, “inamigo-style,” asked them to reconsider. A compromise could have been arrived at. Conflict, resolved.

Let’s play ball! would have been the happy yell. Instead, sadly, the one playing is…. drum roll, please…

My suggestion? Sit down. Relax. Smile. Begin with a prayer. Look at the “bigger picture” and know that the ones who’ll suffer in this uncalled-for fight are the children.

Let’s show them that, as God-loving adults and parents, we can resolve conflicts. Let’s resolve this conflict. It’s the best lesson we can teach our children.