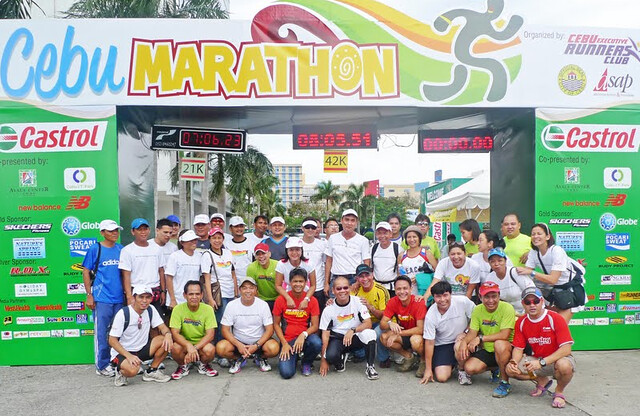 Our group, the Cebu Executive Runners Club (CERC), held a victory and thanksgiving party two nights ago at my house. After the success and hard-work behind the Cebu City Marathon, which CERC organized, it was time to relax. We started with a Holy Mass officiated by Rev. Fr. Renel Cabag of the OAD. Then, it was the all-out eating of lechon, kare-kare, dinuguan… (yes, we marathoners, given the mileage on the road, gorge and eat buffet-style).

Among the CERC members who attended the celebration were Roy Trani (CERC president), Jesse Taborada (past president), and Jacs and Perl Jacalan (the ASAP couple staying on until 1 A.M. when Perl celebrated her birthday at the strike of midnight).

After dinner, it was time to turn sentimental. One of our most prized members, Bro. Carlo Bacalla, is leaving Cebu. A member of the Don Bosco congregration, Bro. Carlo will relocate next month to Laos. Yes, the communist republic Laos. (But true to running form, before agreeing, Bro. Carlo reviewed his future neighborhood and found out that there was a beautiful track oval just a few kilometers away. Yes! he said, after discovering the oval.)

Two nights ago, while “Chariots of Fire” played in the background, we viewed pictures of Bro. Carlo joining the 102-K and 160-K ultramarathons. Yes, 102K and 160K! In fact, today, he is leaving for Manila (together with Atty. Haide Acuña) to join this Saturday’s Bataan Death March 160-km. run from Mariveles, Bataan to Tarlac.

We wish Bro. Carlo and Haide good luck for the sure-to-be-agonizing 160K… and Bon Voyage to Bro. Carlo who’ll convert Laos into a running democracy.