The last time Mr. Federer met Mr. Nadal in Melbourne was in 2009. “God, it’s killing me,” Federer said after losing 9-7 in the fifth set Final, tears of pain rolling down his chiseled cheeks.

Tonight, R & R square off again. Few rivalries, of any game or form of entertainment, have rivaled the one between the Spaniard and the Swiss. Tonight, I think Roger will win. Much as the record speaks otherwise (it’s 17-9, in favor of Nadal), the Federer Express has been in full-throttle, steamrolling past del Potro (4, 3 and 2) and everybody else who faces him across the Australian net. 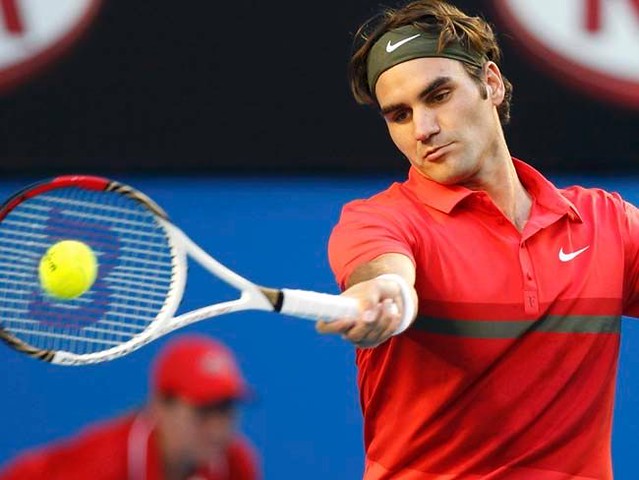 The Melbourne courts are fast, speedier than the red-clay favored by Nadal. This quick-bounce court will be an ace for Roger’s 133-mph pinpoint serves.

But this is the intriguing part of the R & R combat. Mentally, it seems as if Rafa owns Roger. Rafa’s forehand to Roger’s backhand—that’s one of the worst one-two punches that overwhelms Roger. Also, if Roger loses, that means Rafa has won twice as many matches, head-to-head (18 vs. 9). How can RF lay claim to the “I’m The Greatest” sovereignty title when Rafa clobbers him?

Still, that’s all history. Tonight will be historic. Roger in 4.

But, wait. Lest we think that tonight’s the finale, it’s only half of it. The main Gladiator-like ending is still this Sunday. Looming at the opposite end?

Djokovic or Murray. Among these Fantastic Four characters, Roger has won 16 majors, Rafa owns 10 and Novak has four, including three from 2011. Andy The Scot? He has none. Luoya sad uy. That’s why I’m cheering for him. (He beat Japanese No. 1 Kei Nishikori, who was supposed to come to Cebu in last year’s Davis Cup tie.) And, though a boring and lifeless counterpuncher, I hope by week’s end Murray will dye his hair red and wear a tattoo, “The 2012 Wizard of Oz.”

Among the women, who doesn’t like Maria Sharapova? I know Michael Jerome Limpag LOVES her. Here’s looking ahead to a Kim Clijsters vs. Maria final on Saturday.