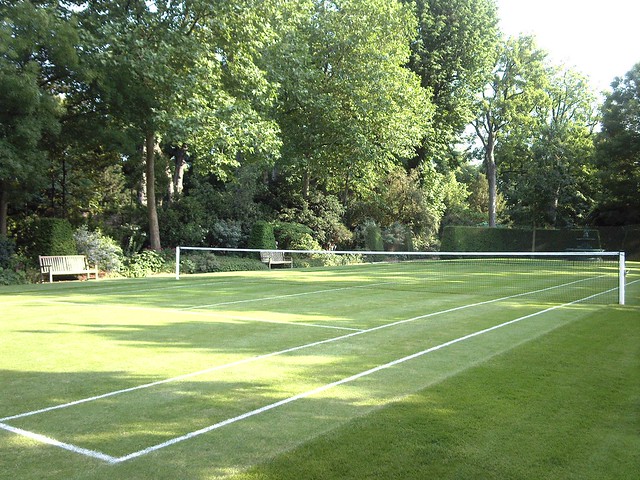 Why is tennis often referred to as “lawn tennis?” That’s because, back in the 19th Century, when the modern game originated, tennis was played on a lawn. Yes, a patch of green field that’s covered with grass.

Tennis started in the United Kingdom. Just like golf. And, just like golf, whose oldest major championship is “The Open,” in tennis, it’s the same: the oldest tournament in the world is found in England. It’s the tennis version of The British Open: Wimbledon.

It began 125 years ago. Imagine that longevity? But the best part about “The Championships” (as organizers want their event called) is not only Wimbledon’s survival and resilience after World Wars I and II—but more so its tradition.

Grass. Unlike all the other tennis contests on Planet Earth, with surfaces that range from hard-court to red clay to indoor carpet, Wimbledon uses the same, old playing field that it’s utilized since 125 years ago.

The surface is alive. Grass grows. They water the court. This happens prior to the two-week-long Wimbledon. And, after Petra Kvitova and Bernard Tomic and Sabine Lisicki trample and pound on the surface, the grass dies.

From green, healthy turf, the grass is massacred and mutates into brown, dead clay. This is Wimbledon. This is what makes the All-England Club exclusive. Its breed. Its antiquity. Its unparalleled class. Its all-white formality.

Two nights ago at Ayala Center, I met two men who’ve been to Wimbledon.

Ramon Saret, my long-time friend from Manila, visited our Queen City for an overnight stop. Mon’s daughter, Jennifer, was ranked among the top two junior tennis players in Asia during the ‘90s. With that lofty ranking, she and her father toured the world—including Wimbledon. In one instance, Mon was dining at the exclusive, for-players-only Dining Hall when two empty seats were soon occupied by familiar names: Boris Becker and Jim Courier. (The two, said Mon, hardly spoke to each other. Puzzled, Mon soon found out why: Boris and Jim were to play each other an hour after that sit-down meal.)

Ernie Delco, a top official of the MCWD, was in London last week. The tennis nut that he is, he queued for two miles before watching Roger Federer in Centre Court.

Both agreed—and had me envious—that Wimbledon stands alone as the most revered of all in tennis.

Which brings me to tonight, 9 P.M., Sunday, July 3. After two weeks of nightly Star Sports shows, starting 8 P.M., we arrive at the conclusion. This is Game 7 of the NBA Finals. It’s the Sunday of the U.S. Open golf in the Congressional Country Club (sadly, a non-Scottish player, unlike Rory McIlroy, will play since Andy Murray lost). 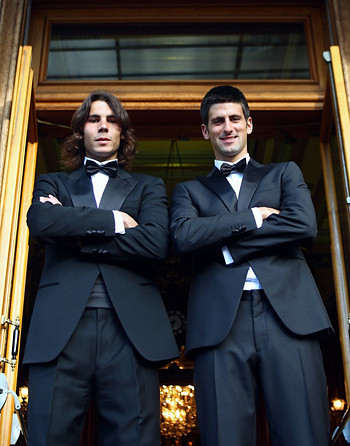 It’s No. 1 versus Numero Uno. Novak Djokovic, beginning tomorrow when the new ATP Rankings are announced, will become the world’s top-ranked player. Rafael Nadal, today’s No. 1, will meet tomorrow’s best in the finals. Isn’t that interesting? A plot and script as good as Steven Spielberg’s?

After six uninterrupted years of all Roger Federer and Rafael Nadal, when both won a combined 21 of the last 24 Grand Slam singles titles (an unbelievable statistic!)—we finally have a different finale. I like this ending better. Para lahi na sad.

The Spaniard is targeting his 11th major title. (If he wins, he’ll be just five away from Roger.) He has not lost in Wimbledon since 2007 and, against the Serb (Novak), their record is 16-11 (including 5-0 in Grand Slam events), in favor of Rafa.

The odds favor the lefty versus the right-hander, right? Not exactly. Because the last four times they played, including two on clay, Mr. Djokovic has triumphed. Which thickens the plot tonight. Watch it, starting 9 P.M., over Star Sports. (Good news for non-cable TV subscribers: live telecast over local channel IBC.) 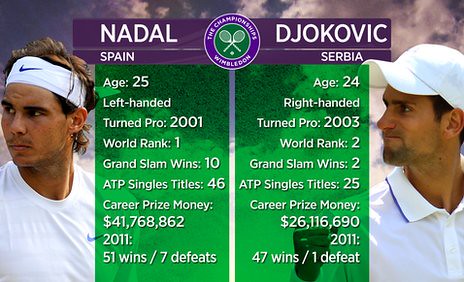