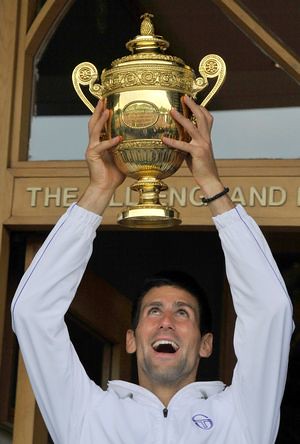 HONG KONG—The headline news here yesterday, in The Standard’s back sports page, proclaims it clear and loud: “DJOKOVIC REIGNS.” In an all-green Wimbledon backdrop photo, Novak Djokovic thumps his right fist on his left chest, opening his mouth to a scream, clasping his Head racquet with the other hand, as if to shout, “I AM NUMBER ONE!”

Novak “The Djoker,” is, no joke, the world’s best. In a span of 72 hours, he clinched the No. 1 world ranking and, two nights ago in London, his first ever All-England Club trophy.

“It’s the best day of my life,” said Novak. To win undefeated in seven matches spanning two weeks in the oldest and most exalted of all the tennis tournaments, it ought to be the best. Wimbledon is the best. Novak is the best.

Djokovic did it by dismantling and mutilating the usually-unconquerable Rafael Nadal. In the first two sets, which Novak won, 6-4, 6-1, his game was as polished as Jason Terry’s three-pointers. Novak hardly missed. He retrieved unretrievable shots. He drop-volleyed. He was, as sports writers would term it, “in the zone.” His game flowed. He was inspired. And, buoyed by the new No. 1 ranking, mentally, he could not be defeated.

He was not. Except the third set. He had a momentary lapse of focus. And, when the Spaniard won that stretch, 6-1, weren’t the members of the “Rafa We Love You Forever Fans Club” relieved? They must have thought… if Rafa can only get the fourth set… we’ll score a come-from-behind victory.

Novak didn’t allow it. Oddly, except for that third set, it was Rafa, the 10-time Grand Slam champion, who was nervous at critical points of the match. At 4-5 in the first set, anxiety crept into the left-hander’s fingers. Same with the latter stages of the fourth set when he made plenty of un-Rafa-like mistakes.

The happiest bunch today? With Rafa’s loss? Yes, of course, the Djokovic fans—though they still number in the thousands. But, by the tens of millions, the happiest are the Roger Federer devotees, for though their man was halted in the Quarterfinals, at least his arch-rival was terminated, too. (Here in Hong Kong, I watched, while sipping Heinekin beer and munching on pizza, in a bar. In another of those Oh-no-not-again moments, my hotel room didn’t have Star Sports. The lady bartender who watched while I sat on the bar stool? Of course, she’s a Roger fan.)

Who is this new Manny Pacquiao of tennis? “I started in the mountains,” said Novak, 24, of his early days when he first held a tennis racquet at age four. “Started in a very small place, and then I continued in Belgrade, practicing tennis—that wasn’t really popular at the time. We were going through some difficult periods—you know, our country had wars and stuff. So it wasn’t easy to hold that desire and really believe in yourself. But I always did, and the people close to me did.” 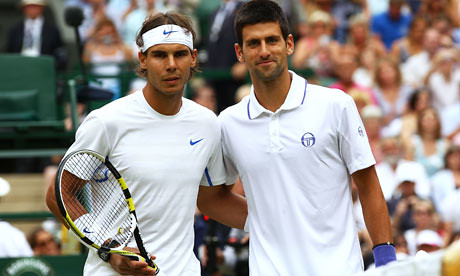 Belief. Yes. Self-belief. In anything and everything in life, this is what matters the most. To you. To me. To all things that we do. If we possess this six-letter word, “belief,” then we can achieve everything and anything we aspire for. As Henry Ford once said, “Whether you believe you can do a thing or believe you can’t, you are right.”

It begins in the mind. Tennis, you think, is physical? Like boxing? True, these sports are brothers—they are a handful of games that are one-on-one, mano-a-mano. And, true, a muscular Nadal flexes his biceps to win points. Tennis, like boxing, is physical.

But it’s more mental. Take Pacquiao. It’s his mind that defeats the Mexicans. The same with Novak. Beginning late last year when he won for Serbia the Davis Cup crown, that win changed his outlook. I AM THE CHAMPION. I CAN BEAT R + R.

And, yes, has he beaten the Roger-Rafa combination, these two who’ve combined to corner that No. 1 ranking since 2004. Yes, in one of those hard-to-believe sports statistics, for the past 7.5 years, only Nadal and Federer have been tennis’ No. 1.