SINGAPORE—I’m here in the Lion City. Literally, the words “Singa” and “Pura” mean “Lion City.” And, when you do get to visit the Singapore Zoo, one of the world’s best, you’ll see plenty of the gold-colored beast.

Singapore is like our Shangri-La. It’s all green. It’s all garden. As soon as you exit Changi Airport and travel through the straight, long road into the city center, trees sprout, all lined-up. Grass litter and glitter. Singapore is an oasis.

It’s sunny here, like it is year-round. It’s also that time of the season when the ladies get excited: it’s the Singapore Sale. Flying here via Air Philippines two days ago was relaxing; the flight departed at 3:20 P.M. and we landed before dark, at 6:40. It’s unlike the past-midnight schedule of Cebu Pacific.

What I dislike about this trip? The cable TV offerings. Would you believe, out of 32 channels at the Peninsula Excelsior Hotel, they don’t have Star Sports. Which means, for this tennis fanatic, plenty of cricket—but no Wimbledon. I’ll have to contend with gazing at Singapore’s grass. 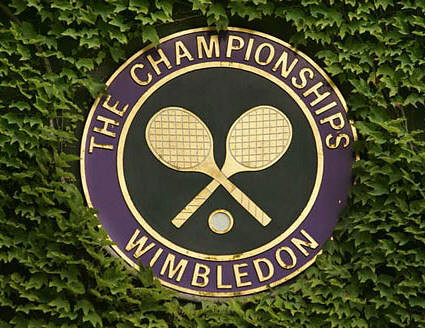 DEL VALLE. One couple whom I envy the most is Randy and Christine Del Valle. A high-ranking executive of Shell, the oil giant, Randy moved to London a few years ago. Here’s Randy’s first-hand report…

“Christine and I queued in Wimbledon on the first day. We were expecting long lines but, surprisingly, there was none. We were able to enter by 12:30 (games started at 12 noon). We heard that most of the spectators lined-up early to get to Centre Court and Courts 1 to 3.

“We watched a number of matches: Tommy Haas losing in four sets to Gilles Muller. We got a glimpse of Donald Young (USA).

“Svetlana Kuznetsova vs. Shuai Zhang (3-6, 6-3, 6-4) was a good match with the 4th-ranked Chinese player winning the first set. Lots of Chinese watching. Zhang was good with her strokes and it was exciting.

“Around 5 P.M., we transferred to Court 18 (the court where Isner-Mahut played the longest match in history last year) to watch US Open champ Juan Martin del Potro vs. Flavio Cipolla. Del Petro won the first set and, in the middle of the 2nd, rain poured. Unfortunately, they had to cancel all the games except the Centre Court (with the roof)…

“As we only had Ground Tickets, it was impossible to get inside Centre Court to see Nadal, Venus, Murray.

“That’s it for now. Will try to go there on Friday and Saturday. Will keep you updated.”

GRAEME. Typing this article from Singapore and receiving an e-mail from Randy in London, I contacted a friend from Australia to make his Big W. comment. (Isn’t the world so much ‘smaller’ and interconnected now?)

Graeme Mackinnon, the Cebu Hall of Fame football coach who’s now back in his native Australia, had these predictions: “Who is going to win Wimbledon? From an Aussie perspective, unfortunately, I cant see an Aussie being involved in the singles in the second week. With the limited preparation of Hewitt, he will be out sooner rather than later. Sam Stosur is the Murray and Henman of Australia. She is carrying the weight of the country on her shoulders and although she has the game to test the best, she is too inconsistent to win. (My tipping is atrocious so there is hope for her.)

“In the past, the Men’s was a two horse race. But, on form this year, there are now three horses with almost equal chances of winning. Roger and Rafa are the perennial thoroughbreds of the field. But Djokovic is the “dark horse” capable of upsetting the frontrunners.

“The Women’s is open; toss a coin among the top 8. I don’t think there is a clear favorite; but if you ask Mike Limpag then Maria is his favorite and she doesn’t have to go on the court. The dark horse (no pun intended) will be the Williams sisters and how they can perform after their injuries. There will be the upsets and on-court dramas but that is Wimbledon.”