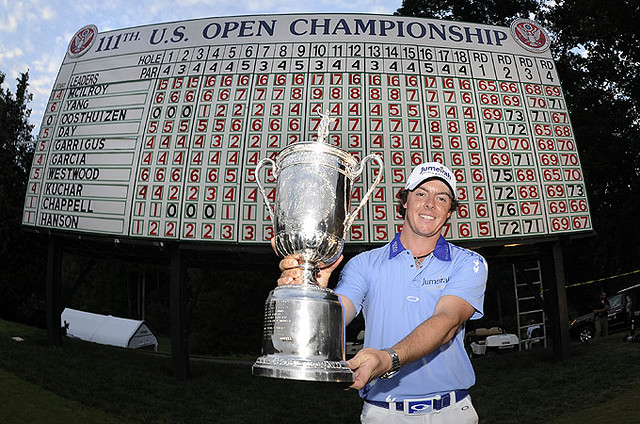 Eric Deen, the five-time Cebu Country Club champion, sent me this SMS yesterday: “Rory winning after his meltdown at The Masters will make him the new Tiger Woods. Being the youngest ever, beating Nicklaus’ record, will elevate him to superstar status. Inspiring for the game of golf.”

Eric is right. Just last April 10, heading into the final Sunday, Rory McIlroy led the entire field at The Masters by four strokes. But, instead of cruising to victory, he disintegrated. McIlroy shot an embarrassing 80. It was one of the most painful breakdowns in golf.

You know what his reaction was? The day after that collapse? It spoke of his mental fortitude. He sent this Twitter message, quoting Muhammad Ali: “It’s repetition of affirmations that leads to belief — and once that belief becomes a deep conviction, things begin to happen.”

McIlroy’s response, after leading the entire Augusta National tournament and being just nine holes away from triumph, is a lifelong lesson for you, for me, and for everybody else who’s alive on this planet. It says, I have suffered defeat… but I am not defeated.

Two days ago, what supremacy and domination. His achievement created several records, 12 U.S. Open records, to be exact, among them:

McIlroy is the second-youngest player to win a major since World War II. (The record-holder? A 21-year-old T.W. at the ’97 Masters.)

Rory is the seventh wire-to-wire winner in U.S. Open history and the first since Tiger in 2002. His margin of victory (eight strokes) is the third largest ever of the U.S. Open and tied for the sixth largest at any major.

McIlroy, who stands 5-foot-10 and weighs 160 lbs., continues a new “youth movement” in golf. Consider that each of the last four majors has been won by a player in his 20s. His win also marks the 11th different winner in as many majors; eight of whom are first-time champions.

I watched ESPN early yesterday morning. I saw the final six holes. What’s fun with Rory is that. . . he’s fun. He bounces when he walks. He smiles more than Y.E. Yang. He’s charismatic. He has fuzzy hair. He’s in a hurry, always. He doesn’t even take a practice swing! Unbelievable. Whether it’s to putt an 18-footer for birdie or to smash that tee shot using his Titleist 910D2 driver, he simply points his eyes toward the target, stands squarely in front of the ball, then, boom, smothers that Titleist Pro V1x ball.

Best of all, Roarin’ Rory has that inborn, inward, incredible confidence. “I like his moxie,” said one golfer who’s accumulated 18 major trophies. “I suppose that is the right word. I like the way he carries himself — his moxie.”

Now, with Tiger Woods injured and celebrating Father’s Day at home with his daughter Sam Alexis and son Charlie Axel, it’s just fitting that somebody else replace him.

“If you’re going to talk about someone challenging Jack’s record,” said Padraig Harrington, “He’s your man. When you are winning majors at 22, with his talent, and he’s got 20-something more years to play majors, and another 100 majors in him, I would give him a great chance to catch Jack.”

Ouch, Tiger. Move over. At 35 years old and not having won a major since November 2009, his instinct is getting extinct. McIlroy, who idolized Woods, has a similar childhood pedigree: his father, Gerry, taught him golf at age 4, when he hit a drive of 40 yards; by 7, he was a club member, and, by 15, Rory qualified for his first pro tournament.

“The thing about these major championships is the history and the prestige,” said McIlroy. “Just being able to add your name to a list like Ben Hogan, Jack Nicklaus, Tom Watson and Arnold Palmer — that is the most satisfying thing about it.”