The best way to travel when visiting a new city is not via bus, MRT, or taxi. It’s not even while riding on a chauffeur-driven E-class Mercedes Benz. It’s by foot. I did that last Friday. Starting at 7 in the morning, I stepped outside our hotel and was greeted by the Singapore sunshine. I walked, stretched, jogged towards the Singapore Recreation Club, just 300 meters away, where green fields awaited. Football rectangles, covered with pristine grass, smiled. Then, I saw a sight that sparkled: Grass courts. Yes. The same ones you’ll see tonight on Star Sports. The club is exclusive and I did not carry my Babolat gear—so no chance to swing a volley. But the sight was more enticing than any 70-percent-off store in the Singapore Sale.

I ran. Along the famous The Fullerton Hotel, I glided. This was the same strip that our Cebu Executive Runners Club (CERC) group passed during the 2008 Singapore Marathon. I relived that 42K. As sweat rolled down my cheeks while running, another smile emerged. For that’s the secret of running; the satisfaction earned comes from within. Some call it “runner’s high” or “adrenaline rush.”

In Singapore, running is the most popular recreational sport. At their annual Marathon held every first Sunday of December, 50,000 join. Last Friday, I saw snippets of that as dozens exercised, planting one rubber shoe in front of another.

The best part of running Singapore? The Marina Bay. You’ve seen the Marina Bay Sands Hotel. Its design adorns every postcard of this first-world nation. With three colossal towers standing to hold a “boat” at the summit, the sight is majestic. (It’s the world’s most expensive stand-alone casino at $8 billion.) The Marina Bay Sands is the Eiffel Tower… The Burj… the Petronas Towers of Singapore. It’s now the land’s most photographed structure. 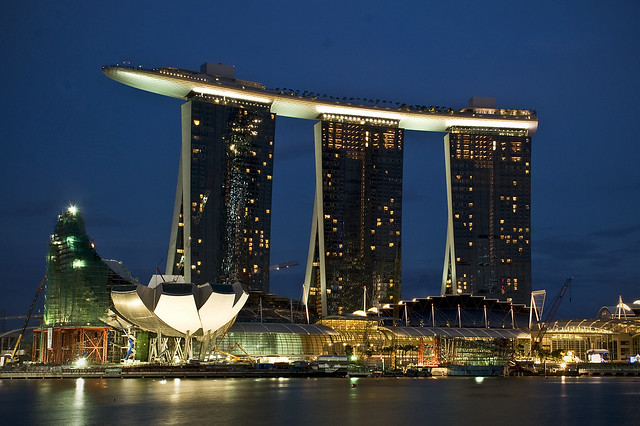 Imagine running beside the Sands? For that’s what amazes you about Singapore: their planning and consideration for open, clean and green space. Along the Marina Bay is a boardwalk. That’s where, for 90 minutes, I ran. That’s where you’ll find tourists and locals strolling. It’s a haven for exercise that’s exercise heaven. Fresh air. The water streaming beside you. The Esplanade (or “durian”). I even found solar panels scattered around the boardwalk that provided lighting and cooling (with large fans) to passers-by.

Which got me to thinking: this is how our South Road Properties (SRP) should aim to look like. The similarities with Marina Bay are obvious. Both are on reclaimed land. Both sit on large tracts of land (ours is 300 hectares; theirs is 360). Both sleep beside the water.  Our city leaders should visit the Marina Bay project—and copy portions of it for the SRP.

Back to running; another thought came to mind: the Ungo Runners (Max Limpag) vs. Bobby Nalzaro debate on “Road Revolution.” Max and his fellow runners immensely enjoyed that Sunday when Osmeña Blvd. was closed to vehicles; Bobby opposed it. In Singapore, there’s no quarrel. There’s no need for road closure. Why? Because they’ve got sidewalks, open spaces, boardwalks, parks. We don’t. What we don’t have is strategic thinking. (Decades back, Lee Kuan Yew set aside wide roads and planted huge trees that now benefit his people.) Which leads me back to SRP. This open area is the only one we’ve got to do right. There’s nothing much we can do to save our Cebu City inner city roads. They’re narrow with zero sidewalks.

The SRP is bare. The Marina Bay (www.marina-bay.sg) is our best, nearby example. Their vision? “A green-field site surrounded by water and gardens… that provides an opportunity for further urban transformation, attracting new investments, visitors and talent, as well as becoming a new destination for the local community.” They call it “Garden City by the Bay.” How should our SRP be named?