We don’t know what will happen tomorrow. Miami’s vice called Dallas may win. Or the heat inside the American Airlines Arena may burn the Mavs. This is the beauty of sport. The surprise. The suspense. The thrill. There are no guarantees. Sure, odds and probabilities are plenty. Experts predicted that the Miami Heat would go all the way — but lose to Dirk Nowitzki?

The Spalding ball is round. It spins. It back-bounces. It rolls. This NBA Final is a dice roll. Pick the Texans to beat the Floridians? Good choice. Or, maybe not. Remember how Kobe Bryant, last year, flew from Boston to L.A. and won the season’s final two games? James can do a Bryant. Nike star can follow Nike star. We don’t know what will happen tomorrow. But this we know: In a battle of giants, the 7-footer is taller than the 6-foot-8. Dirk Nowitzki soars above LeBron James. 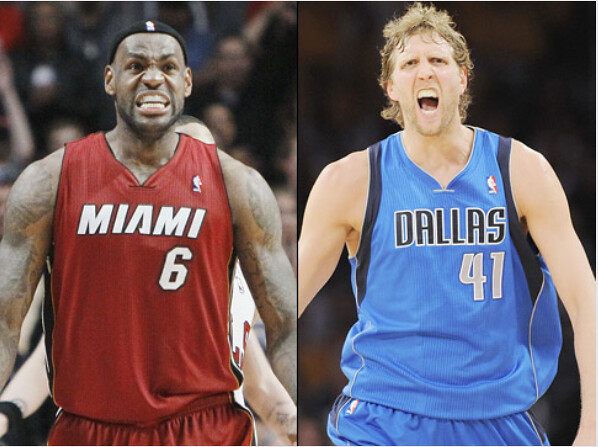 LeBron has Dwayne Wade and Chris Bosh as teammates. Dirk? His teammates look so old they can claim 20 percent discounts in Cebu establishments without showing their Senior Citizen cards. Dirk is surrounded by non-entities. Well, okay, that’s too harsh. There’s Jason Kidd. But Kidd is no kid, he’s 38 years too old. “We’re like the movie ‘The Castoffs’,” said Donnie Nelson, the General Manager of the Mavericks. “Our superstar is a superstar. But go down the list. J.J. (Barea) is too small. Jason Kidd is too old. Jason Terry is the Stevie Nash boobie prize. Tyson Chandler and (Peja) Stojakovic are returned or damaged goods. And (DeShawn Stevenson) was a throw-in with our Caron Butler deal.”

True. Yet, look at the score. Tomorrow, Dallas will be 48 minutes away from its first-ever NBA championship. The single-handed reason for this all? A single person. An 84-inch-tall German native who, in 2007, was the first European-born player in NBA history to win the Most Valuable Player crown. After five NBA Final games, Dirk Nowitzki has averaged 27 points and 9.4 rebounds. Jeff Van Gundy, the former New York Knicks coach, pronounced him as the series MVP — prior to Game 5. Van Gundy believes that, even if Miami rallies to win games 6 and 7, the MVP ought to be Dirk. (Only once, in NBA history, back in 1969 with Jerry West of the Lakers, has an MVP been named from a losing team.) “He is now being known by one name,” Van Gundy said of Nowitzki. “You start saying ‘Dirk,’ everybody knows.”

All this, Dirk is doing despite a myriad of problems: an injured middle finger on his left hand during Game 1 and a 39-degree Celsius high fever in Game 4. While LeBron and Wade were supposed to be the clutch performers (think of their demolition of the Chicago Bulls), they’re lousy compared to the rule of one. . . Dirkules.

Dirk has scored a combined 52 points in the fourth quarter. LeBron? Embarrassing. After zero points in the final quarter in Game 4, he scored only two meaningless points in Game 5. Total for LBJ in five games: 11 points. In Game 5’s last six minutes, LeBron missed two of three shots, had zero assists, zero rebounds, and one turnover. 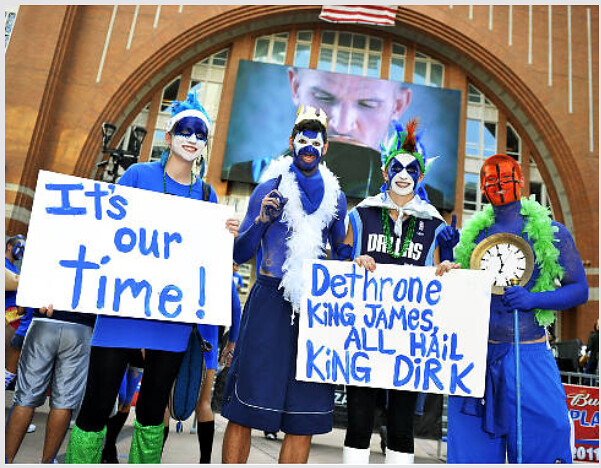 Well…. Not so fast. Although the Game 5 winner has gone on to claim the trophy in 19 out of the 26 times after a 2-all score, “Miami 2011” hopes to do a come-from-behind like “Los Angeles 2010.” Possible? Yes. In Hollywood, anything is possible. In Miami? Only if LeBron James rises to the challenge — and up on the air — like Michael Jordan.