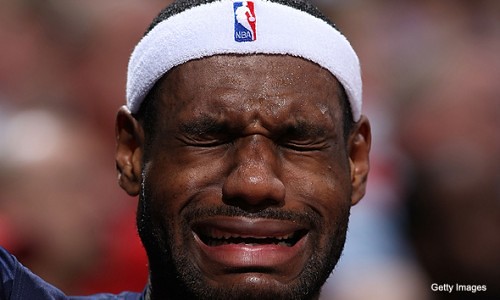 ESPN summed it up best: MIAMI NEEDED LEBRON TO BE GREAT. HE WASN’T.

Dirk Nowitzki was. That’s why he and the Blue Boys of Texas are the World Champions.

What happened to Mr. James? It’s bewildering. It’s astonishing. You saw it on BTV. Here’s the most talented athlete in basketball, one 6-foot-8 who can dribble like Isiah Thomas and rebound like Abdul-Jabbar, one who can soar like Erving and drill that long-range missile like Bird.

What happened to Mr. Great? LeBron collapsed. The burden was too massive and heavy, even for a muscular 250-lb. behemoth. LeBron yielded to the unbearable pressure. Of Dallas. Of Stevenson. Of Florida. Of his teammate, Dwayne. Of all of us, scrutinizing his every dribble, fake and jump shot.

LeBron was not LeBron. We’d become accustomed to watching him penetrate and score. He’s the Gladiator. One who’s unafraid. One who, by the sheer muscle of his Mr. Olympia body, could score 35, or 44, or 56–like he did once against Toronto in 2005.

The past two weeks, LeBron was paralyzed. He was intimidated. By who or by what? I don’t know. It’s puzzling. But he was. Whenever he’d touch that ball, the first thing he’d do–within a millisecond–is to search for one of his four teammates. He forgot who he was. He forgot the games in Boston and Chicago. Mr. Extraordinary became Ordinary. In the first five games of The Final, he scored a combined 11 points in the fourth quarter. Can you believe that? Those numbers belong in the lowliest of the Guinness World Record. That’s 11 points in the 60 most crucial minutes.

In all, the No. 6-wearing Heat averaged 17.8 points per game. His regular season numbers? He averaged 26.7. That’s a big, big letdown.

Because the star in James fizzled, Miami deserves to lose. LBJ isn’t worthy. Not this time. Maybe next year. Maybe never. You know how some people–no matter how talented or how hard they try–never win the prize? In nine years of attempting, LeBron has scored 0 for 9.

Nowitzki? He’s ReDirkulous. Scoring a ridiculously-low three points in the first half of Game 6, he rebounded to score 18 in the second. “I don’t think there’s any doubt after this series,” said coach Rick Carlisle, “that Dirk has certainly earned the clout of being one of the all-time great players.” He now has one ring. LeBron has empty fingers.

The man who made famous the term “The Decision,” when he transferred from Cleveland to Miami, now has a new term to remember: “The Disintegration.” Or, how about… The Indecision. It bewilders me how indecisive LeBron was. You win championships–think of Li Na of China–by being the aggressor. There’s no champion with the first name Doubtful. 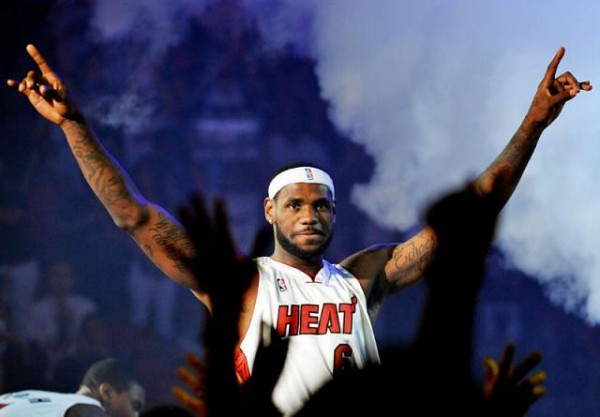 You know the term “buaya?” Of course, in basketball parlance, we know what this means. It’s negative. It means a player hogs the ball too much, shoots too much; he’s selfish. Well, guess what? LeBron should have been a buaya. He forgot that he’s not Scottie Pippen. He’s the star. He’s not Robin, he’s Batman. Or Kobe Bryant. He ought to have copied Kobe, who has five more NBA titles than him. Kobe is buaya. Everybody knows that. So what? Kobe answers. That’s why I’ve won so many, he’d say.

Maybe LeBron’s too nice. Maybe he wants to be called “Mr. Unselfish.” But that’s not why Miami paid him $19 million this year. He’s there to score, dunk, score, dunk.

The saddest part in all this: Many rooted for James to win. I did. Jana and Jasmin did. So did majority of my friends. This is unbearably painful for him. Did you watch him walk out of the stadium and inside that hallway to the locker room, with head bent low and down? Nobody has been more ridiculed, scorned, tormented, vilified.

But success breeds high expectations. Look at our Pacquiao. He’s won the last 14 fights so convincingly that, even with a lopsided victory against Shane Mosley, we crucified him, saying, “MP wasn’t at his best.”

LeBron is the best. We expected more. Instead, we got LeChoke.