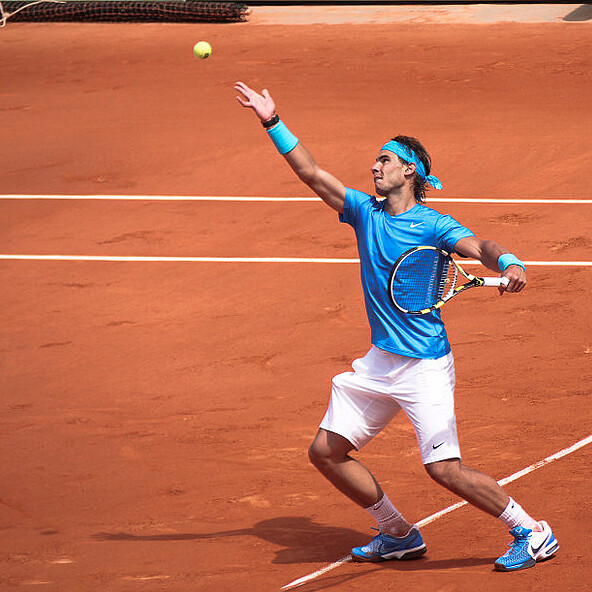 Roger Federer should have won that first set. He led 5-2. He owned a set point. But, after missing a drop-shot by millimeters, he lost the next five games. Had Roger won that set, we never know…

But now we know. We know that, after the first 63 minutes were his, Rafael Nadal was invincible. He started jumping, lunging, fist-pumping. Vamos! reverberated throughout Stade Roland Garros. 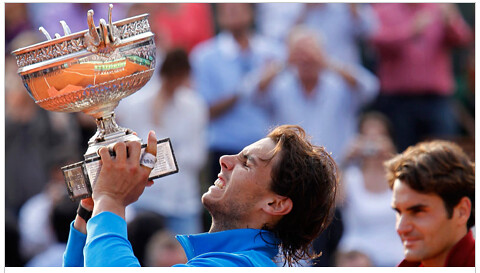 It’s obvious that, between the two, Nadal is better. So why, you ask, is Federer universally proclaimed as The Best Ever? All this chatter, of course, is pointless. RF fans will forever defend their man; so will RN devotees. Rafa himself addressed this issue, saying, “When you talk about these statistics, when you try and make these comparisons, really it’s not very interesting to me. I’m very happy with what I have, with who I am. I’m not the best player in the history of tennis. I think I’m among the best. That’s true. That’s enough for me.” Roger offers his own analysis: “He plays better against the better ones, and that’s what he showed today. He’s a great champion, on clay especially.”

What did we witness last Sunday? I cite 10 thoughts after observing the 10th Slam victory…

One, the Roger v. Rafa Rivalry is one of sport’s most compelling. No other one-two contest (Borg-McEnroe, Ali-Frazier, Palmer-Nicklaus) can compare. The contrast in personalities. The styles and spins of play. The emotions: cool vs. combative. These are incomparable. And a message to all tennis fans that, should one have the resources, they ought to watch them play “live” before they retire. 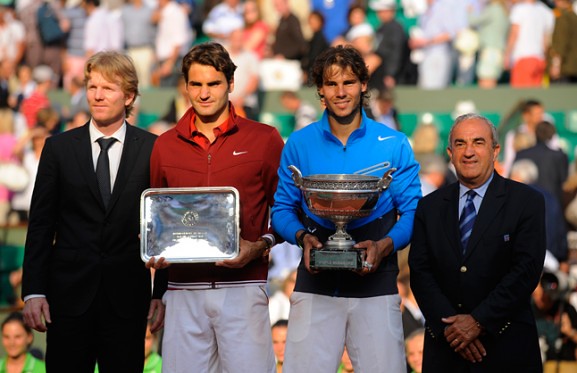 Two, on court, if it’s Rafa’s forehand against Roger’s backhand, the outcome is as obvious as Pacquiao-Marquez III. The lefty wins. Roger has to find a way to avoid such ping-pong, cross-court exchanges.

Three, the tenacity of the Spaniard is unfathomable. His doggedness, resolve, and fortitude — more than his whipping forehand topspin or 100-meter-dash speed — gifts him victory. Tennis is mental. He who grits his teeth harder and wants it more pockets the $1.7 million prize money.

Four, defense wins the game. Watch the NBA. Listen to Coach Yayoy Alcoseba and to LeBron James & Co. “Defense is the key to success,” they’ll voice out in unison. Same with tennis. Nadal’s retrieval prowess — his ability to return a shot that, to anybody else on the ATP Tour, would have been a point lost — makes him greater than Bjorn Borg on clay.

Five, Roger is only 29. Which means he’s not 30 – a “psychological barrier” age when tennis pros (who’ve played since six years old) are on decline. 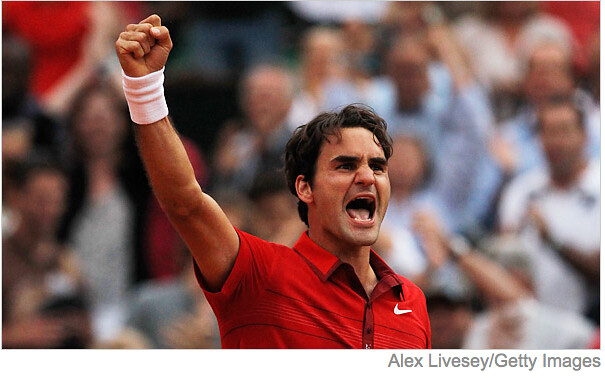 Six, the question is: Can Rafa, now with 10 majors, surpass Roger’s 16? At 25 years old, he’s five years younger. That’s about 20 Grand Slam title opportunities. He can if…

Eight, Rafa can win despite “playing ugly.” Rafa almost lost. In the first round against John Isner, he was down two sets to one. Had he been defeated, that would have ranked as the greatest upset of all time. But he kept afloat. He survived. “The real Rafa is both the Rafa who wins and the Rafa who plays well, and the Rafa who suffers and doesn’t play that well,” said Nadal. “You have to face this situation.”

Nine, had Rafa faced Novak in the finals, he’d have lost. I think so. Roger’s backhand is his weakness. Not Novak. His two-handed shot causes grief to Rafa. That’s what caused defeat to the Mallorcan in the last four Final meetings they had.

Ten, I can’t wait for Wimbledon….. 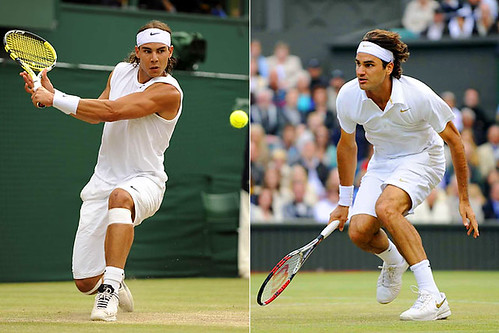