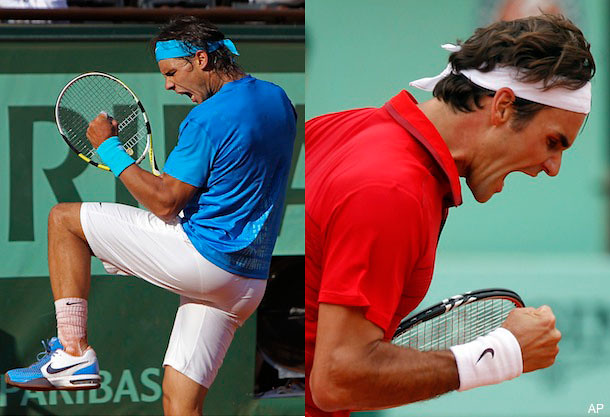 A funny thing happened in this 2011 French Open. Everybody forgot about Roger Federer. All the focus was on Mr. Djokovic. All the talk was on Rafa’s quest for a sixth trophy. Who’s Roger? Is he still alive? In this planet? Playing tennis? Well, he happens to be the only living (and, yes, non-living) male person to have won 16 Grand Slam singles titles. He won on the Parisian red clay in 2009. He won an Olympic doubles gold medal in 2010. He is, almost unanimously, the best hairy, male player who’s gripped a tennis racket.

And, during the past two weeks in Paris, like a stealth bomber that’s hidden from the radar view, he was silent, unseen, moving, targeting, and now, all of a sudden, he’s out in the open, in the Finals, and within sight of the prize.

Less pressure. Compared to Rafa and Novak, the Swiss had it easier. He’s relegated to a world ranking of # 3. That’s a lowly position that RF had not stooped down to since, when, 2002? Yet, all this is working for the good. For Roger’s good. Because elite, world’s-best athletes need an extra boost of motivation to allow them to climb beyond Mount Everest’s peak – and this is it for Roger.

Neglected, ignored and, yes, disregarded as a 30-year-old (in August 8) has-been former-superstar whose star has faded, this abandonment Roger is using to spark himself.

COME ON!!!!!!! I’ve never, in over eight years of observation, seen him pump his fist and shout “Come On!” as many times as now. He’s feeding off this omission by the media — myself included — and using it to power his smash. You think I’m gone? I’ll prove you people wrong! he’s mentally saying.

Did you see his annihilation of Novak? He served 18 aces. He fired his forehand down-the-line. He snapped his backhand cross-court. He gracefully performed drop shots. He attacked. He was unafraid to exchange shot versus shot against the Serb. “I really wanted to make it as physical as possible,” which I was able to make happen,” said Roger.

Because of RF’s win, the happiest man in Paris today is… Rafa… the arch-rival but best friend of Roger (you should see their YouTube video, giggling and joking for endless minutes while filming an advertisement).

Had Djokovic entered the finals, he’d have been world No.1 when the new ATP rankings are released tomorrow, Monday. Roger prevented that. And he did so during Rafa’s 25th birthday last Friday. Best friends help each other. Roger did his part. Will Rafa return the favor, losing to his similar 6-foot-1, Nike-fully-clothed amigo in tonight’s Grand Finale (at 9 P.M., PHL time)?

Ha-ha. It’s like LeBron James asking Nowitzki, “Hey, Dirk, can you pleeeease give me a chance and give me my first NBA ring?” (Dirk’s reply: ‘Bron, me, too. I’ve never won a title!)

And so we’re back to one of the greatest rivalries in history. “I have another opportunity to beat Rafa here and get the Roland Garros title,” said Roger. “I’ve got to play some extraordinarily special tennis. I’m aware of that. But I obviously took a huge step today, and hope I can get everything together for the final.”

My pick? I’ve always attempted to stand on neutral ground when these two play. Roger is an exquisite, Swiss-cool, one-handed-backhand-hitting, effortless, injury-less gentleman. Rafa is animalistic, bull-like, tenacious-beyond-compare, humble yet ferocious. The two — apart from having collected 21 of the last 24 Grand Slam singles titles since 2005 — also share a loftier accolade: they are two of the most courteous, good-mannered role models in entertainment.

So I pick… “R.” Once, in a Casino Español luncheon with Frank Malilong on one side as Rafa’s Cebu-based attorney and Moya Jackson, Chinggay Utzurrum and Michelle So on the opposite end as I’m-In-Love-With-Roger lifetime members, it was a cross-fire worse than Mayweather, Sr. and Freddie Roach.

Seriously, as inspired as Roger is by his twin daughters, I’d pick RN. A winner in 44 out of 45 matches in Roland Garros, he’ll add a sixth crown past 12 midnight tonight. Vamos.