I’ve had the rare opportunity, back in September of ‘007, to witness Manny Pacquiao train. It was at the Rex “Wakee” Salud Gym in Labangon and, thanks to Philboxing’s co-administrator Salven Lagumbay (who, coincidentally, is celebrating his birthday today), I watched MP up-close. Twice. 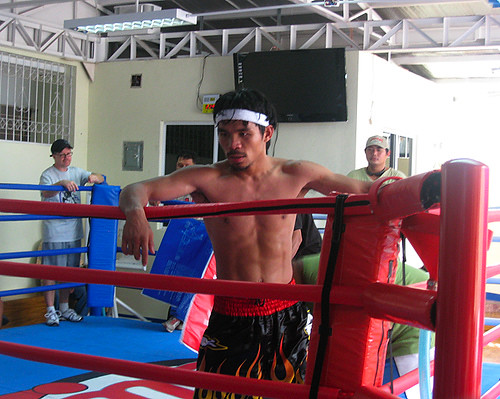 “Manny Pacquiao had just finished 10 rounds of sparring,” I wrote four years ago. “Tired? Did he look fatigued? No. How about recharged? Or pumped-up? For one-and-a-half hours, I observed Manny. After sparring, Manny stepped down the ring then proceeded to pummel the double-end bag. He stared at the round leather that hung from the ceiling, encircled it, threw quick jabs, moved his head left, ducked, stepped back, forward.”

MP. Those initials don’t just spell out the initials of the most famous Pinoy, they also translate to many words. Maximum Pain. That’s one. For no boxer — and possibly athlete — is willing to drip more sweat, digest more punishment, and smile more while relishing all the affliction, than MP.

Gordon Marino of The Wall Street Journal, yesterday, wrote a stellar piece, “The Fight of the Physical Outlier.” I quote some portions…

“Pacquiao does 2,000 repetitions each day of situps and other punishing abdominal exercises,” said Marino. “He rounds out these exercises by, among other things, fast hill runs, interval training, zipping around cones to improve footwork and even, when no fight is coming up, playing basketball.” 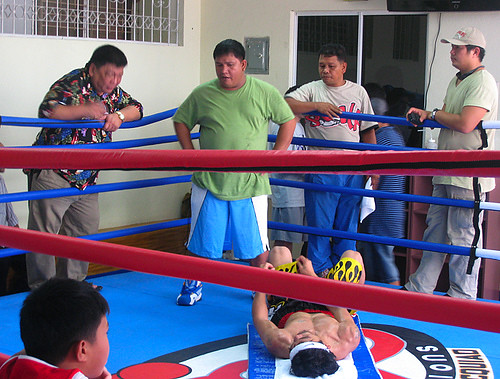 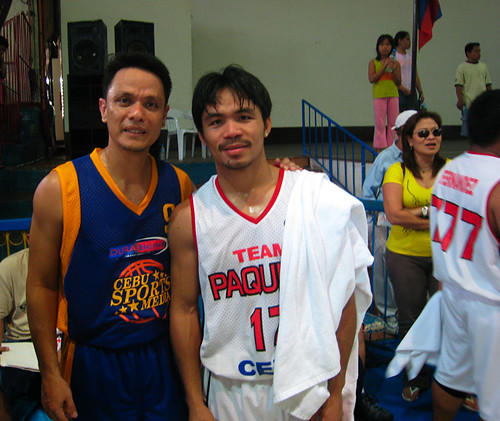 MP’s resting heart rate is 42. That’s absurdly low. “Some endurance athletes, like Olympic cross-country skiers,” said Mr. Marino, “have lower resting pulse rates—somewhere around 38, Ariza says—but they also train at high altitude, something Pacquiao doesn’t. ‘Manny is on the level of the most conditioned athletes in the world,’ the trainer says. ‘He’s a phenomenon. I wish we could do in-depth tests, but he doesn’t like anything invasive.’”

This MP spells Mankind’s Phenomenon. MP is so gifted and driven that boxers often try to emulate his training. They can’t. In my two visits to the RWS Gym, I interviewed boxers and trainers. They all recited the same Quotable Quote: “Many follow Manny’s intense training. They all get sick!”

MP = Marvelous Pugilist. Simply, MP trains too hard, too intensely, too much. Haven’t we read of Alex Ariza and Freddie Roach asking their pupil to slow down and relax? Wow. How many athletes have been told the same? I can’t remember any other.

“Manny will go 15 rounds hitting the pads with me, and do exercises in the 60-second intervals between rounds,” says Roach. ‘It’s crazy.’”

“On days when we have heavy sparring, we like to cut out the morning run,” Ariza says. “Manny knows this and he’ll plead, ‘Please don’t stop me from running today.'”

While 98.7 percent of us often ask for stoppage to excruciating physical torture, it’s the opposite for MP. “Other differences that make Pacquiao stand out are the intensity and tempo at which he trains and fights, and his ability to ignore pain,” wrote Gordon Marino. “Most boxers are constantly trying to decide when to expend energy and when to take a round off. Pacquiao likes to know that he has enough training in the bank to allow him to bring the most intense heat possible and to punch almost continuously.”

Muscle Power. That’s MP. Shawn Porter, his sparring-mate, explains: “Sure, Manny is fast and hits hard, but the thing that is special with him is his intensity. It is electric in there. He is always pushing the pace.”

Ariza, quoted by Marino, likens Pacquiao to a military person (Navy SEAL?) who has the ability to extinguish pain during heavy exertion. Said Ariza: “Manny is definitely one of them. When Manny was a kid, he would run five miles a day in flip flops. Try that for a while and it will not only toughen your feet up, it will increase your pain tolerance.”

Digesting all this penance, Manny, who is set to earn P600,000,000 this Sunday, is also this MP: Mega-billionaire Pinoy.