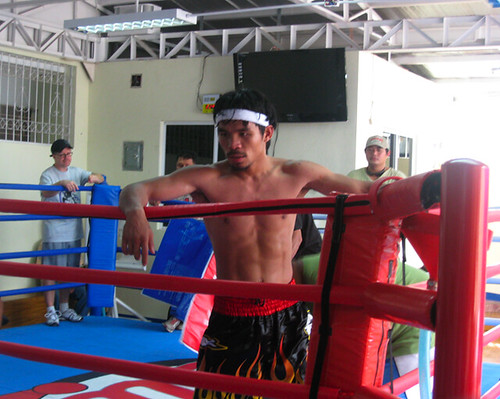 When he climbs the ring at past 11 a.m. (RP time) today, this we are proud to declare: Manny Pacquiao trained in Cebu City.

He jogged on the steep hills of Alta Vista. Sprinted near call centers named People Support and eTelecare along the I.T. Park. He setup camp at a Labangon hideaway called the Rex “Wakee” Salud (RWS) Gym. Inside that blue-and-white building, Manny skipped rope, attacked the double-end bag, and logged 112 sparring rounds. At the Waterfront Cebu City Hotel and Casino, he slept in a suite room and feasted on Cafe Uno’s breakfast and dinner buffets.

Basketball? Sure. As part of his Sunday morning routine, Manny dribbled together with Team Pacquiao—his loyal gang of trainers and rah-rah boys—against us, the Cebuano sportswriters. Twice, we traded jump-shots at the City Sports Club; once, we collided and tumbled on the parquet floor of the Cebu Coliseum. 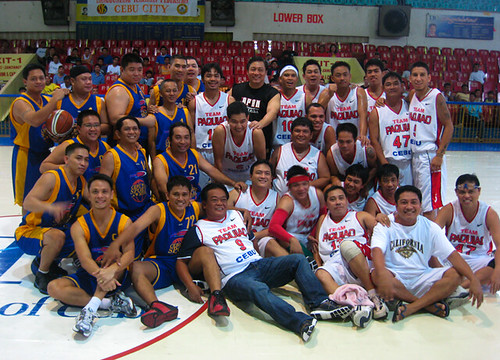 Good question. From August 14 until September 21—that’s 39 days—why did the King of Boxing train in the Queen City of the South? Wasn’t he supposed to be at the Wild Card Gym? In Los Angeles? As devised by Freddie Roach?

Inside Wakee Salud’s gym, he has all the training amenities he needs. Two square rings. Weightlifting equipment. A JBL surround-sound system. A 50-inch Samsung LCD screen to scout his enemies. Sparring partners? No problem. He flew in two Mexicans and, anytime he needed a Filipino to maul, Cebu was near any RP boxing gym. 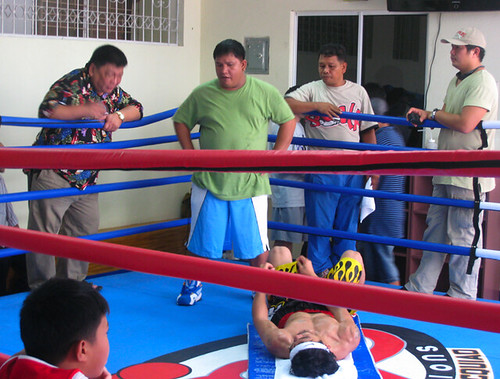 Manny doing his abdominals with Wakee Salud (left most), Buboy Fernandez (inside ring) and Dodie Boy Penalosa (third from left)

“Lonely siya sa L.A.,” said Dennis Padilla, the actor who’s become one of Pacquiao’s closest friends. That’s what Dennis told me the few times we spoke after the basketball games he played with fellow actor Long Mejia. “Here in Cebu,” added Dennis, “he can train just as hard but the advantage is, during his down-time, when he wants to relax, like dinner and Sundays, he’s surrounded by friends.” 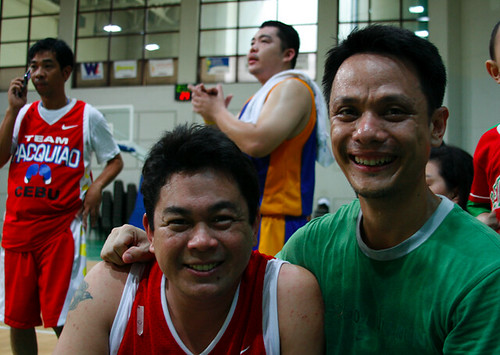 Dennis Padilla (above photo, left) is correct. One of the ingredients inside the Pacman package is this: He wants to be around people. Friends, fans, family—he loves being around them. Haven’t you noticed why he’s called “Showmanny?” He’s a showman. And how can a showman be a showman without people swarming him?

But wait. If you think Pacquiao was undisciplined here and didn’t train 199 percent—you’re mistaken. Twice, I spent three hours inside the RWS Gym to observe. With Freddie Roach and Buboy Fernandez steering his training, he was all-boxing-business. Nobody—not his trainers nor the press—can say, after his 39 days here, that Pacman wasn’t as intense and super-charged. 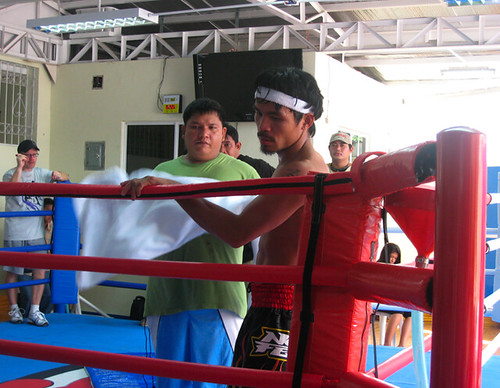 Why Cebu? Another reason is, simply, because it’s not Manila. There, he’s hounded by politicians and TV cameras and sexy starlets whose only contribution to his training is one word: Distraction. In Cebu, he resides in a city with good food and good training—like Manila—but minus the glitter.

Manny is also, lest we forget, bisaya. So when he speaks to friends like George and Jing-Jing Rama, or when he hobnobs with Councilors Yayoy Alcoseba and Jack Jakosalem, or when he seeks the advise of Dodie Boy Peñalosa, he speaks bisaya.

Wife Jinky? If Manny misses her or their baby girl Mary Divine Grace, all they need to do is take the one-hour Gensan flight—not the 13 hours to fly to L.A. A million-peso contract signing with GMA-7? No problem. Manila is 65 minutes away.

“If Manny beats Barrera,” Dong Secuya, the creator of www.philboxing.com, told me on Pacquaio’s last day here, “he’ll train in Cebu for his future fights.” Dong is right. Can you imagine that? If Manny pummels the Mexican today, a key ingredient of his recipe was cooked here. Now, which city do you think he’ll choose to train for his next fight?

I can’t wait to play basketball with Manny again. 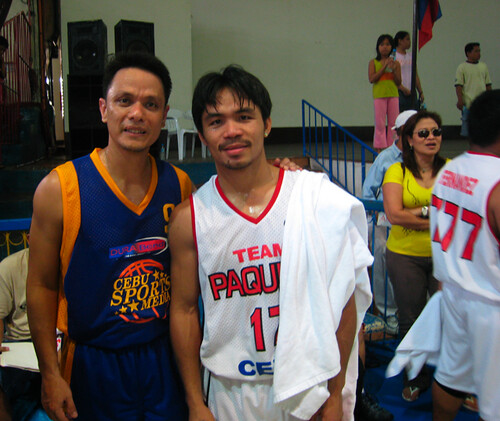