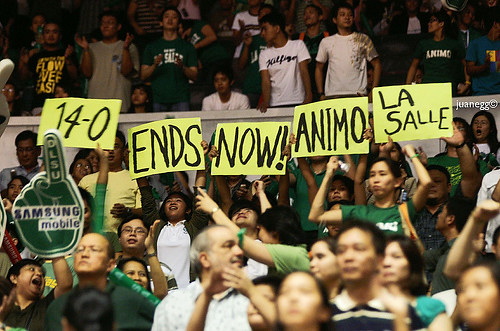 (Photo courtesy of the top UAAP and NCAA site, www.inboundpass.com)

How is that possible? It’s not. But it did happen. At the UAAP championships held at the Araneta Coliseum in Quezon City, the winner wasn’t the team that won 14-0—it was the one who scored 2-0.

De La Salle University (DLSU), which struggled past Ateneo De Manila University (ADMU) last week before entering the finals against the University of the East (UE), was the underdog against the only team that scored a 14-0 regular season record. But last Sunday—as the Cebuanos watched at Hola España—La Salle beat UE, 73-64.

Tony Atayde of www.inboundpass.com, the best writer of La Salle UAAP basketball, said it best in his article entitled, “May I Offer You Some Cake?” He wrote: “La Salle wins 7th title in the 7th decade of the UAAP on the 7th day of October 2007…

“This is a UAAP season that would drive a mathematician crazy. The equations are not right. The team that should didn’t and the team that shouldn’t did. Beating Ateneo twice in 5 games, the Green Archers get to the finals. Today, 2 straight was far better than 14 straight. La Salle had an overall record of 19-6 while UE had 14-2 but La Salle wins the most coveted prize in Philippine college basketball, the UAAP Men’s Senior Basketball Crown…

“It is the sweetest championship for the Green Archers. From suspension to champion. From being doubted to being validated as the best team in the league.”