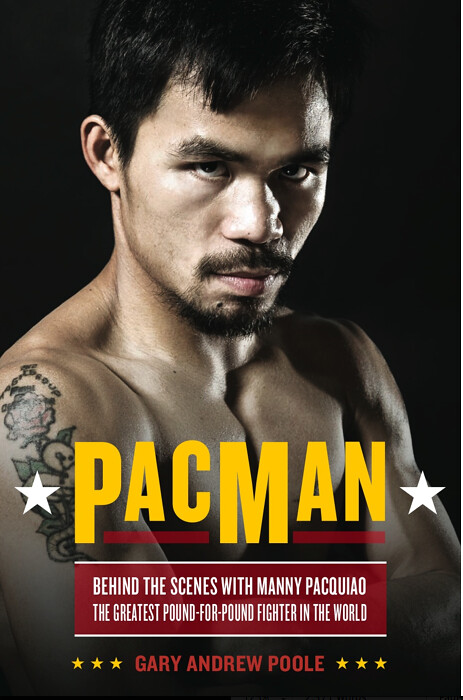 UBAY, Bohol – I’m here with my father-in-law, Jacinto “Jack” Mendez. The past three days, in between church visits, we eat fresh crabs, nap, watch the sunrise, exchange stories, swim, read. We’re at his rest-house that’s situated on a ledge and overlooking 180 degrees of the sea.

I brought a book. “PacMan: Behind the scenes with Manny Pacquiao, the greatest pound-for-pound fighter in the world” is written by Gary Andrew Poole, who used to write for the New York Times and GQ. It’s 248 pages long. Among the few books that I’ve read of MP, it’s the best.

Divided into 13 chapters, it begins with the Prologue. Manny is training in the Wild Card Gym. His daily meals at Nat’s Thai, which serves Filipino dishes, is well documented. The other chapters? Number One is “The City of Dust,” the author’s term for Gen. Santos City.

“The province, the place where Emmanuel Dapidran Pacquiao was born on December 17, 1978, is the fourth poorest in the Philippines, where boys risk their lives to climb coconut trees (to make fifty centavo per coconut), play basketball on dirt courts, ride four to a motorcycle, get addicted to shabu (a combination of meth and caffeine), and live in endless crap, with roosters, goats, stray dogs, and no running water.”

The American author, Mr. Poole, describes our country in the poorest of terms. Sure, we’re no rich New York City, but given that he wanted to portray Manny growing up amidst the most slum of cities, he describes us as a destination of dirt and dirty men.

“The Streets of Manila” is Chapter Two and it explains the path taken by Pacquiao, at age 15, from GenSan to Manila. Manny’s first residence is in Malabon and his first manager, Polding Correa. “The GenSan boys sold doughnuts and worked construction (once he didn’t eat for four days because his employer didn’t pay him),” wrote Poole in page 23.

The book is well-written. As you turn each page and your mind deciphers the words, you can’t wait for the next discovery in Pacquiao’s life. We’ve known about Manny’s dire upbringing — but it’s only after reading this book that you learn the details. “Life is difficult here,” said Manny. “There are times when I eat rice only once a day.” Those words Pacquiao wrote to his mom in a letter.

The tenacity and no-fear that Manny displays on the ring today, no doubt, can all be attributed to the years of poverty that he endured.

L&M was the name of his first boxing gym. It was along Paquita St. “In the fate-obsessed Philippines, it was known as a lucky gym for producing champions, but it was considered (with a sick sense of pride) the planet’s worst-smelling boxing establishment,” wrote Poole.

“‘When Pacquiao came here, he didn’t have anything,” says Ramon ‘Moy’ Lainez, the ‘L’ in the L&M. ‘He was a stowaway, and he wasn’t very strong. We didn’t expect much from him. He had a big heart, he really wanted to fight, he really trained, and he dreamed that someday he will be a world champion.” That appeared in page 25.

Of the many themes that emerged from the book, what stands tallest is the teamwork between MP and Freddie Roach. As we know, without Roach’s fatherly guidance, our Pinoy hero wouldn’t be as great. It was 10 years ago when Manny first met Freddie – when he was brought to the U.S. by Rod Nazario. After watching Manny hit the mitts for the first time in his gym, Roach commented, “The speed and power worked so well together. Kind of just jumped on you… Within three minutes, it was like we knew each other our entire lives.”

The rest of the chapters — “The Mexecutioner,” “The Golden Boy and the Hitman,” and “Going Global,” and more — are exciting. As I said, many episodes we partly know — but not the full details, which are all bared open in this book.

“Don’t Quote Me on the Women” is on Chapter 7. Self-explanatory, if you want tsismis and Krista Ranillo stories, read this portion.

Read this biography. With 14 days left before Shane Mosley tastes the gloves of Manny on his cheekbones, this is the perfect appetizer and prequel. Happy Easter!