Every year, I consult a doctor. His specialization isn’t centered on Internal Medicine, osteoporosis or Dentistry. It’s centered on Centers. On point guards, 3-point shots and the NBA Play-offs. Each year, I consult Dr. Raul “Yayoy” Alcoseba. He’s a Cebu City Councilor, now on his third term. He’s the M. Lhuillier coach. He’s the most famous and successful guru on dribbling and rebounding outside Manila. To me, he’s the best — including the PBA.

He’s a doctor. He screens patients (players), analyses their defects, he corrects, supplies medicine (more weight-training?) and ensures that they’re robust. Like a true physician. Plus, he owns a degree that none of is will ever achieve: Doctorate on Basketology. (Shouldn’t UC or UV confer such a title on Dr. Alcoseba?) 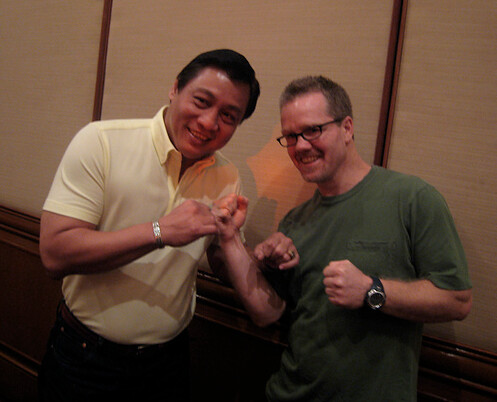 The Coach with Freddie Roach

“Between the NBA’s Eastern and Western conferences, I prefer the East,” the coaching wizard explained by phone from his City Hall office yesterday morning. “The Lakers lost in Game One. Same with the Spurs. These are upset victories by the New Orleans Hornets and Memphis Grizzlies. Los Angeles and San Antonio no longer have the home-court advantage. At this level of game, in the playoffs, you cannot afford to take any seed for-granted. You have to concentrate all the time. Everybody has to be 100 percent.”

The Lakers were dismal in their 109-100 defeat. “I watched that game,” said Yayoy. “They had no defense. No intensity.” Aiming for their third straight NBA crown, the Kobe Bryant-led Lakers, said Alcoseba, will have difficulty winning No. 3 in a row. “The hardest thing is a three-peat,” he said. “It’s mental. I’ve been in such situations with many teams before. It’s so difficult to maintain the intensity, that level, after winning two straight titles. Sometimes, the edge is gone. It’s mental. At times, a team becomes complacent. Or overconfident, mo-kompyansa. With Game 2 against the Hornets, that’s a must-win for L.A. One more loss and they’re down 0-2.”

If that happens and the Lakers proceed to lose to New Orleans, it will be one of the biggest upsets in playoff history. “The Hornets is the No. 8 seed,” said Yayoy. “They were not even expected to be in the playoffs. They had, what, a 1-7 start to the regular season? Still, I expect Kobe and his team to defeat the Hornets.”

San Antonio Spurs? They’re the No.1 seed in the West, right? “Yes, they are,” he said. “But they lost (101-98 loss to Memphis) because Manu Ginobili, who averages nearly 20 a game, did not play Game One. I’m sure when he returns, the Spurs, who are the top-seeds, will bounce back.”

For the Western Division, the doctor predicts the two first-game losers, L.A. and San Antonio, to make it to the second round. But his prediction on the finalists? “I think the Lakers and the Oklahoma Thunder will be in the Western finals.”

In the East, Yayoy prefers Youth versus Experience. “I don’t see Boston, with their three older players — Garnett, Pierce and Allen — making it to the conference finals.” In fact, it was only minutes before we spoke that I checked the results via the internet: Boston escaped with an 87-85 victory against the New York Knicks when Ray Allen made a 3-pointer with 12 seconds left.

“It’s Miami vs. Chicago in the East,” predicted Yayoy. As for Chicago, one player stands out: Derrick Rose. “He will be the MVP. He has everything. He owns double-double numbers. He scores (averaging 25 points per game) and assists (7.7 APG). He hits big shots in crucial moments. He’s a clutch player. Hands-down, he’s the NBA’s MVP.”

The Bulls or the Heat? “I’d choose Miami. The three — LeBron, Wade and Bosh — will be too strong. In the end, the Finals, it will go down to the contest that everybody wants to see: Heat vs. Lakers.”

A self-confessed Lakers fan who correctly predicted the wins of L.A. the past two seasons, does Dr. Alcoseba anticipate the same result in 2011? “The Lakers will have a hard time. As I said, a three-peat is extremely difficult. I think LeBron will prevail over Kobe.”