Manny steals my candies, said Tommy Osmeña. Yes, that’s true. The richest athlete that our nation has ever produced, pocketing P500,000,000 per blockbuster fight, the man who owns mansions spanning Los Angeles and General Santos, the congressman who bankrolled his own election campaign… yes, this billionaire codenamed Pacman… steals the candies of Tommy O.

“We sit beside each other in Congress,” said Tomas R. Osmeña, the Congressman of the Cebu City South District of his counterpart Representative of Sarangani Province. “I always keep candies in my drawer. After I leave my seat and come back, they’re gone. I look at Manny. He has all my candies!”

Last Wednesday night, I was seated beside Tommy. To my right was Vice Mayor Joy Augustus Young. We were at the International Culinary Arts Academy of Cebu, or the ICAAC (owned by the younger brother of the vice mayor, Jeremy Young). Our group of 20 included my fellow members from the Rotary Club of Cebu West: Lenton Beltran, Ex Bollozos, Andrew Ching, Nilo Domingo, Romy Dy Pico, Nonito Narvasa, Francis Onglatco, Carlo Suarez, Alvin Tan, Justin Uy, Wilton Uykingtian and John Young. Joining us were three Rotarians from Rotary Singapore West: Tay Wei Lien, Darryl Kuek, Chio Poh Leng and Ashley McKinnon, plus a representative of SOS Phils., Pamela Daguman. Our Rotary groups were invited by Vice Mayor Young for dinner to celebrate our joint project with the Cebu City government and DepEd. We donated a total of 50,000 books to the Library Hub. 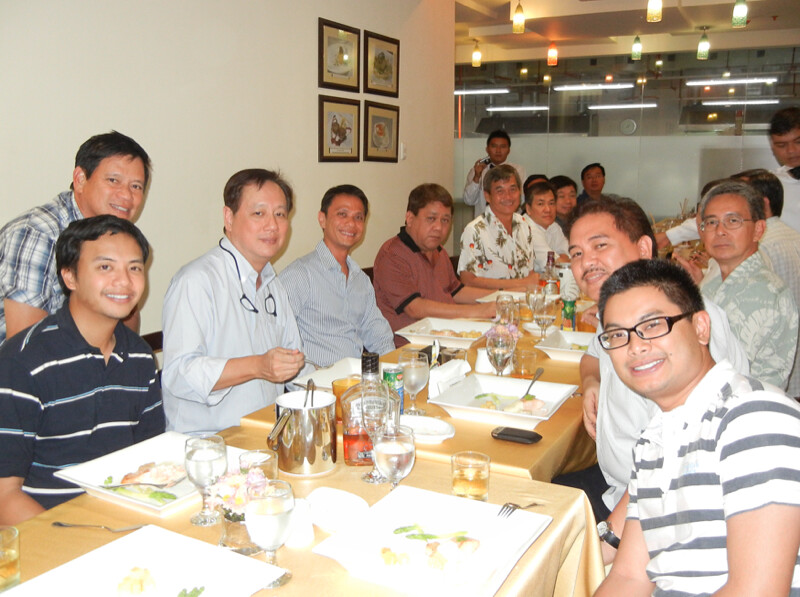 In our dinner of fresh salad with white cheese, the main dish of salmon, asparagus and scallops, and dessert of freshly-made chocolate ice cream, we discussed a milieu of topics. They ranged from Pres. Noynoy’s visit to Singapore (and having to climb 20 flights of stairs when the elevator broke down) to Flor Contemplacion’s execution in 1994 to the Magazine Hub project that we’re targeting for Cebu City. Then, we talked in length about the world’s most popular Filipino.

“I asked to be seated beside Manny in Congress,” said Rep. Osmeña. “The story about the candies? I ended up placing a bunch full of candies inside his drawer so he won’t steal from me.” John Young, seated to Tommy’s left, laughed.

“How many times have you watched Manny fight?” I asked. Tommy sat expressionless. Mentally, he was counting. “I can’t remember how many because I’ve watched so many of his fights,” he said. This May 7 in Las Vegas, Pacquiao’s good friend and fellow congressman will once more be there to cheer for him.

The Ricky Hatton KO? “The morning before each fight, Manny always has mass celebrated. I was there. I had just recovered from cancer. The moment I entered the room, Manny saw me. He asked that I sit beside him. ‘But, no,’ I said, ‘that’s reserved for Jinkee.’ Manny insisted. I sat beside him during mass. Then, during the homily, the priest asked Manny to say a few words. Manny got the microphone and, instead, gave it to me. He wanted me to say something. I said no. Finally, Manny spoke and, in the end, interrupted the mass and forced me to speak. I talked about my own fight — and victory — over cancer.”

Manny is a very caring person, said Tommy. He’s always concerned. During his birthdays, the Pambansang Kamao never fails to call and greet.

“When I had my bout against cancer,” said Osmeña, “I received a phone call the night before Manny’s fight against Oscar de la Hoya. He said, ‘Are you coming to watch?’ I said, ‘No, I can’t. I’m in Houston. But my son Miguel will be there.’”

Tommy wished Manny good luck while Manny wished Tommy a speedy recovery. “Then, the day after the fight, when nobody expected Manny to beat De la Hoya but he did, I get another unexpected call. It’s Manny. Imagine how busy he is, swamped with all these people. He remembers to call. That’s how good a person he is. You know what Manny told me?”

Our Rotary table sat silent, awaiting. “I won my fight,” Manny told me. “Now you win yours.”