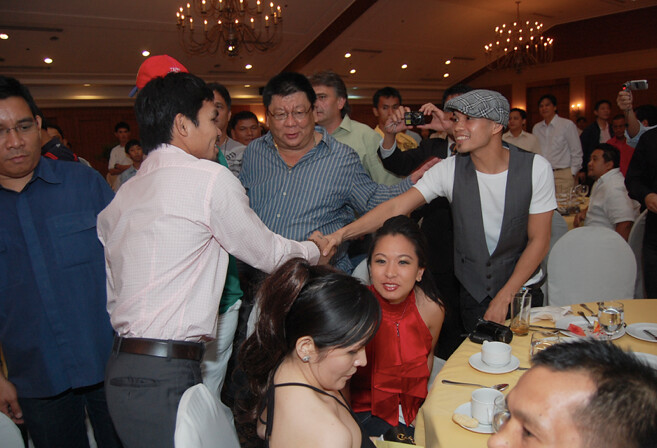 Wakee, introducing Manny to Nonito, during the 2009 Cebu Sports Awards

Yesterday morning, I spoke to one of Congressman Pacquiao’s best friends. “Manny and I became close in 2005,” said Rex “Wakee” Salud, who was in Cagayan de Oro yesterday when we talked for 18 minutes. “He had just lost the fight to Morales and I invited him to attend a promotion I organized in Lapu-Lapu. Manny came. That’s when our friendship started.”

Since then, M & W have been inseparable. Maybe you can call Mr. Salud “the good luck charm” of Rep. Pacquiao because, after their meeting, PacMan has not lost a fight since. That’s 13 straight wins leading up to Mosley. “Every fight since we became close, I’ve watched in person,” said Wakee, who’ll be flying to Las Vegas next Tuesday, on May 3.

Wakee’s biggest contribution to Manny’s career? It was convincing our Pinoy pride to stick with Bob Arum after he had signed with Oscar de la Hoya. “After Manny defeated Morales, he no longer wanted to sign with Top Rank,” said Wakee. “It was one of his last fights with their promotion. We were together in Denny’s restaurant in Los Angeles. Then, Freddie Roach fetched him in the airport. I didn’t know where they went. Attorney Gacal was with them…”

Of course, now we know that Manny met with Oscar de la Hoya that day. “Oscar offered $500,000 cash as signing bonus. Manny took it. He signed the contract. The next day, after the press conference, Bob Arum wanted to meet with Manny. At first, he refused. I asked Manny to listen to Bob; anyway, there was no harm in listening. And so, in one room, it was just the four of us: Manny, Bob Arum, myself and Michael Koncz. While Arum was speaking, Manny was just nodding his head. All along, while he did not say it, he had already signed with Golden Boy Promotions.

“I flew back to the Philippines. I arrived in Manila on a Friday and flew to Cebu on Sunday. Then Manny called. That’s when he told me about his acceptance of the $500,000 and his signing with Golden Boy. I told him he should have put that on hold first. Maybe Arum will match that offer. ‘Come here right away,’ said Manny. ‘I can’t,’ I said. ‘I just got home and it’s a Sunday. The travel agencies are closed.‘ But Manny insisted. And so on Monday, I bought a ticket and returned to L.A.”

At that point, nobody knew what was going on behind the scenes. Nobody could talk to Manny. Except one… RWS. “Ako ra gyud maka-duol ni Manny (It was only I, at that time, who could talk to Manny),” he said. “I stayed for 10 days in L.A., even spending my birthday there. Manny was afraid to go back to Arum. Hadlok siya mo pirma (He was afraid to sign), given that he had just signed with Oscar.”

Arum made a counteroffer of $1,000,000. “Plus, he would handle all the legal problems that were sure to happen,” said Wakee. “Manny further negotiated. He asked that the TV rights in the Phils. be under him. Arum said okay.”

The rest, as the cliche goes, is history. Who knows what would have happened had MP cemented his agreement with ODLH? “For sure,” said Wakee, “there would have been no Pacquiao vs. De La Hoya fight. How can a promoter fight his own boxer?”

I asked Wakee about next weekend’s May 7 fight. “Before Manny left for America, we were together. I was able to go up to Baguio and watched him spar for five rounds. At that time, he had cough and colds, maybe due to the hot-and-cold changing weather. Even when I dropped him at the airport before he flew to L.A., he was coughing.” Wakee’s prediction? KO before Round 10.

What makes MP unbelievable? “He’s one of a kind. His resistance is unbelievable. He trains the longest. Even though he’s been absent from his workouts prior to training, when he’d come back, his stamina is still there. One time, we were together and, for three straight days, he did not sleep. We played poker, billiards. Pulaw siya tu-lo ka gabii. Imagine that. For us, we’d already faint and weaken. Not Manny. His resistance is so strong. He’s one of a kind. And, most of all, it’s God-given. Even Manny himself says so. Manny knows it’s a gift from God.”