Mr. Bryant faced Mr. James last Thursday. It was a meeting of two MVPs: Kobe had won the award in 2008 while LeBron snatched the Most Valuable Player trophy the past two seasons. On an eight-game winning streak in the city where the Wild Card Gym resides, the Lakers team was on a roll. Miami? They had lost steam. They lost five games in a row. But, when the two squads played three nights ago, it was LBJ who beat KB. The score: Miami, 94; L.A., 88. 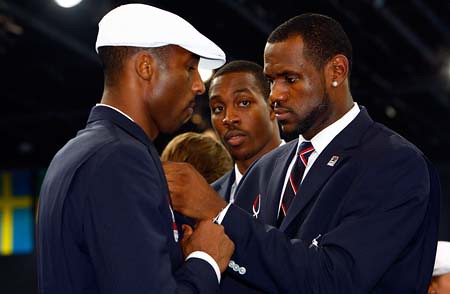 “By snapping a five-game losing streak and completing a two-game sweep of the defending champions,” wrote one of my favorite NBA analysts, Jason Whitlock of Fox Sports, “the Heat reminded everyone — and most importantly themselves —they can compete with the elite when the Big Three get a little help from their soldiers.”

Miami did not win the NBA title. Not yet. Or, in the eyes of cynics, they won’t. Not in 2011. And, one victory doesn’t epitomize the whole season. They’re still in third place in the Eastern Conference. Against the Boston Celtics and Chicago Bulls (the top two), they’re a combined 0-6. Still, a win is a triumph–especially against the two-time defending champions.

“Had Miami lost Thursday night,” said Whitlock, “the Big Three were toast. There would be no reason to take them seriously the rest of the year.”

True. Last week was a Crisis Scenario. They had lost five straight. Calls for coach Erik Spoelstra to resign—again; in an echo we’ve heard many times before–resurfaced. Miami felt the heat. They were pressured. “A loss Thursday night would’ve destroyed the Heat mentally and emotionally,” added Whitlock. “It would’ve been a repeat of the Chicago game, complete with postgame tears.”

But, against LA, they responded positively. The game was close. With five minutes left to play, the score was 80-all. Then, after Kobe sank two three-pointers, it was 88-88. Two minutes were left. Then, Kobe–the NBA’s best closer–closed the door on himself. He failed miserably. Kobe attempted another 3-point shot. Wade blocked it. Down four points with 20 seconds remaining, he made another attempt. This time, 29-feet away. Again, he missed. In all, he was 8-for-21 and, in the crucial second half, was 2-for-11.

Kobe failed. But do you know how he responded? Over an hour after the Miami-L.A. game had finished, he came back on court and shot hundreds of jumpers.

“Bryant wanted the workout, wanted the chance to cleanse himself of missed shots and missed opportunities in the final minutes,” wrote Adrian Wojnarowski for Yahoo! Sports. “Mostly, he wanted James and Wade to understand the lengths they’ll need to go to take his title away. ‘This is my job,’ Bryant would say 2½ hours after the game, slumped in a chair courtside. ‘This is what you’re supposed to do …’”

Here’s the Wojnarowski narration: “All those Heat stars breathed a sigh, packed up and left American Airlines Arena. Bryant marched back onto the floor at 10:45 p.m. and started sweating again. Three Heat ball boys fed him passes, and Bryant marched to every corner of the floor and lofted his shots. Security staff and other Heat officials stood befuddled, unsure what to do. One security worker insisted he had never witnessed this in his eight years on the job. The Lakers were gone and Bryant was still dripping sweat on the Heat logo.

“Sometimes, players will do this in their own arena, but never on the road. This was a spectacle and no accident. Bryant’s still the player they’re chasing because he’s the MVP of the back-to-back NBA champions. Bryant knows these Heat will get it together and become a problem for everyone in the Eastern Conference. Wherever James and Wade had gone late Thursday, Bryant clearly wanted word to reach them: He won’t accept losing to the Heat. Not on Christmas, not on Thursday night and not in June.

“Hours later, when asked about his motivation in a text message, Bryant responded with the words of Achilles: ‘I want what all men want. I just want it more.’”