With the exception of Manny Pacquiao, no other athletes I’ve written about more on this box than Rafa and Roger. In Melbourne for the Australian Open, both, thus far, are en route to another No.1 vs. No.2 showdown. This rivalry bests any other in tennis history. There have been plenty: Sampras-Agassi, Graf-Seles, McEnroe-Borg, Evert-Navratilova. But none compare to R & R. Consider this most unbelievable of statistics: 21 of the last 23 Grand Slam singles champions have been either Federer or Nadal. This is wonderful news for fans of both–but awful for the rest of the ATP Tour.

Roger, of course, is the defending champion of Australia. He’s the Wizard of Oz. He’s appeared in 22 career Grand Slam finals–and won 16. Rafa? He’s aiming for the ‘Rafa Slam.‘ Having won the French Open, Wimbledon and the U.S. Open in 2010, if he wins this Sunday at the Rod Laver Arena, that’s four straight majors. Roger hasn’t done that. The last man is R. Laver himself, who accomplished the feat in 1969.

BOOM-BOOM. I’m watching this Saturday. So will over a dozen of my fellow members from the Rotary Club of Cebu West, many of whom are first-time, live-boxing watchers. It’s Rey Bautista–possibly the most famous Filipino on boxing gloves next to Pacquiao and Donaire. His opponent this Jan. 29 at the Waterfront Cebu City Hotel and Casino? He’s a Barrera. And, in Mexico, this family name carries a lineage of champions. 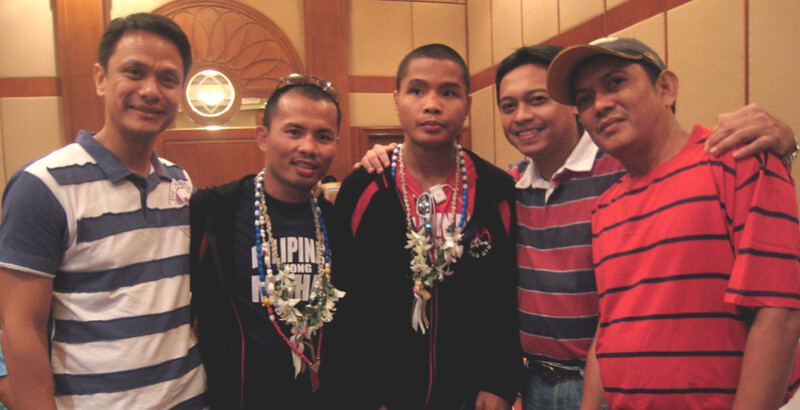 Boom-Boom is exciting to watch because, as his name implies, he boxes to the tune of will.i.am’s hit song, Boom Boom Pow. He’s offensive. He’s self-assured and domineering.

I know plenty of devotees will watch. My hope is that the non-boxing enthusiast will parade to the Waterfront this Saturday, too. Live, watching-with-your-bare-eyes boxing is so much different–and thrilling–than viewing from your TV set. Try it out this weekend.

DAVIS CUP. Harry Don Radaza, the councilor and city council sports and tourism head of Lapu-Lapu City, has news for all: This Friday, tickets to the Philippines vs. Japan tennis event called Davis Cup will finally be for sale. Planet Sports in Ayala Center’s Active Zone and (hopefully, given the permission) Nike Stadium at the SM City will be the official ticket outlets.

PBA. In a contest between the Danding Cojuangco-owned San Miguel Beer and the Manny V. Pangilinan-owned Talk N Text, the winner in Game One was the Tropang Texters of MVP. That game was in Victorias City. Game Two–tomorrow–is back in Metro Manila at the Cuneta Astrodome. Expect this best-of-seven series to be a see-saw battle.

NFL. Far, far away from our 7,107 islands, the top story in American sports was the National Football League. Just two nights ago, two teams emerged winners and will face each other in Super Bowl XLV. It’s the Pittsburgh Steelers against the Green Bay Packers. The Super Bowl–the single most important day in U.S. sports–will be on Feb. 6 at the venue where Manny Pacquiao won twice: the Cowboys Stadium in Arlington, Texas. Like I’ve done in the past, I’ll definitely be late for work that Monday morning (Feb. 7 here) to watch.

M & M. If there’s Rafa-Roger, there’s a version in boxing. When will Floyd “Money” Mayweather, Jr. finally silence his blabbering mouth to fight Manny Pacquiao? In another twist to the numerous curves and turns in this spiraling story, Floyd said he’ll fight Manny.

Here he goes again, calling our Pinoy champ names. Again, he accuses MP of taking ‘power pellets.’ Like you, I can’t wait when Manny will finally extinguish his foul mouth via a boom-boom knockout.