By now, you’ve heard that the Davis Cup tennis event will be held in Cebu. The Davis Cup is one of sport’s longest-running tournaments. It started in 1900. It encompasses 137 nations joining.

Here in Cebu, from March 4 to 6, we will host the DC tie between the Philippines and Japan. The venue, befitting this world-class battle, is a world-class facility: the Plantation Bay Resort and Spa in Lapu-Lapu City.

There will be five matches during this first weekend of March. On Friday (March 4), it’s the first two singles matches. Cecil Mamiit and Treat Huey will separately clash with Japan’s Nos. 1 and 2. Most-likely, the Japanese will be led by Tatsuma Ito, Go Soeda, Takao Suzuki and Toshihide Matsui. On Saturday, it’s the lone doubles match. On Sunday, it’s the reverse singles: the final two matches. All games will be best-of-five sets.

For tennis and for Cebu, this is gigantic. Tennis players will surely troop to Plantation Bay to gaze, to clap, to sing, “Pinoy Ako, Pinoy,” and to yell, “GO, PILIPINAS!” Non-tennis fans? Why, it will be the same: the boisterous atmosphere, the momentous occasion, the PHL flags hoisted fronting the JPN flags–this is an encounter never to be missed. That’s tennis. That’s Davis Cup.

Well, here’s even more significant news for Cebuanos. On this same first-weekend-of-March, this won’t be the only international-brand event.

XTERRA. The “X” stands for the cousin of the “X-Games.” Because when we think of “X” and “X-Games,” we think of this word: XTREME. We also think of these: adventure, risk, thrill. That’s Xterra. By definition, Xterra is “the world’s leading off-road triathlon series… with 60 races around the world.”

It’s triathlon. But, with mud, with off-road paths, with rocky terrain–all mixed as part of the ingredients for a wild and wet triathlon. Xterra is brought to the Philippines by Fred Uytengsu. We all know Mr. Uytengsu: he’s the businessman/sportsman owner of the Alaska Aces PBA team. He also brought to our nation (and Camarines Sur) the Ironman 70.3. 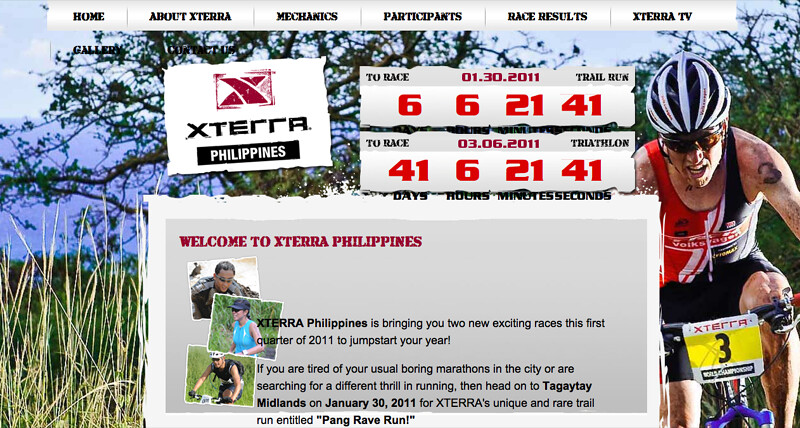 For the first time in the Philippines, he’s taking Xterra to our shores. Not in Manila; but right here in Cebu. On March 6, 2011. Yes, I repeat: the same weekend as the Davis Cup. No doubt, this will be the grandest morning in sports for Cebu. Possibly, ever. Two international brands. Two world-caliber events. Both on the same 3-6-11.

XTERRA Philippines will be held in Liloan. The start/finish area will be at Amara, the premier subdivision owned by the Ayalas (Cebu Holdings, Inc.). The swim is 1.5K, followed by a 35K mountain-bike around the rough off-roads of Liloan. Then, a 10K run–using trail running shoes–in an out-and-back course. All to start and finish in Amara. Liloan Mayor Duke Frasco–a runner whom I’ve seen join several of our Cebu 10Ks–is embracing this event fully. Same with Gov. Gwen Garcia, the mother-in-law of Duke, who is set to formally announce this contest soon. Danao City sports chief Boying Rodriguez, an institution in cycling and triathlon in our island, is one of the lead organizers.

Conflict? Will “DC” and “X” be in direct combat? No and Yes. First, the venues. They’re separate. Tennis is in Lapu-Lapu City while Triathlon is in Liloan.

The crowd? Again, no clash. The brand-new tennis clay-court built by Plantation Bay will have bleachers to seat 1,500 spectators. Xterra? From what I learned, only 200 participants are expected to join. That’s because the entry fees are expensive. Possibly, the fees are $150/person or $180/relay team. (Yes, relay teams — separate swimmer, biker, runner — are welcome.)

The only minor “tug-of-war” between these two? For us, the media. Who’ll grab the headlines? Will there be enough manpower to cover both? Imagine the odds of two mega-sporting-brands happening on exactly the same year, same month, same weekend?

Well, it is. And it’s great for Sugbu. Are you and I not lucky to be living here? For, as Jay Aldeguer and his Islands Souvenirs would proclaim…  I (heart) CEBU.