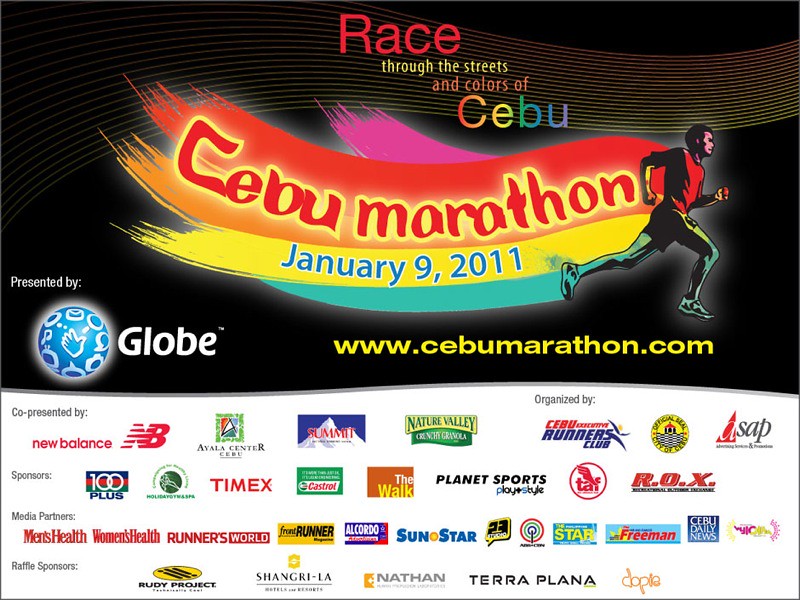 Next Sunday, it’s one of Cebu’s most-awaited of events. If Al Mendoza calls the Azkals the “Achievers of the Year,” then Running is the “Sport of the Year.” For no other endeavor has convinced more Cebuanos to move and exercise and sway those arms and legs than this sport.

1.) The Tunnel. For the first time, runners joining the 42K and 21K will trot below sea level. Almost a kilometer in length, running the tunnel was the same experience we had in Hong Kong. During that HK Marathon, runners jogged beneath the waters. It was a unique, cherished moment. Cebuanos will experience the same next Sunday.

2.) Fort San Pedro. Another feature in 2011 is running inside Plaza Independencia. Imagine gazing at the beauty of the Malacañang sa Sugbo and Fort San Pedro? This is new. Prepare your eyes.

3.) Sights and Sounds of Cebu. Held during the Sinulog week, this is what distinguishes the CCM from other marathons: the timing. For, with the Sinulog, there’s no bigger festival in our 7,107 islands. And what better time for tourists to visit? Plus, if you’re a runner… perfect. You see — literally, on foot — the sights of Cebu; you hear the sounds of the Sinulog drumbeats.

5.) Cebu City. The role of government is crucial. Apart from giving the prize money amounting to P389,500 (with P60,000 going to the 42K men’s and women’s winners), it’s the support that’s essential. Every major marathon on earth has the backing of their city. Boston. Berlin. London. New York. Chicago. All these world’s best bring tens of thousands of tourist-runners – sports tourism, it’s called — because of the assistance of their mayor and city officials. Thanks to the City Government of Cebu, we have one of the most celebrated of races in the Philippines.

6.) CITOM and Jack Jakosalem. The roads will be closed from 4 to 9:30 on the morning on Jan. 9. If you run inside the SRP, the South Road Properties will be closed. Same with, of course, the tunnel (absolutely no fumes!). Osmeña Blvd. will be half-closed–one side of our island’s most important thoroughfare will be off-limits to vehicles.

7.) CERC. Called the Cebu Executive Runners Club, this is the group of nearly 50 doctors, lawyers, businessmen and executives. Each year, CERC focuses on organizing only one race: the CCM. This is a non-money-making event that consumes our time, effort and resources. What for? CERC does this because we love running and we want to share our incredible marathon experiences with our fellow Cebuanos. You need not fly to Hong Kong or Singapore. Run in your very own Cebu. (Notice: Get ready to be leg-massaged by some of Cebu’s top doctors!)

9.) Carbo-loading Party. You must attend this! Scheduled on Jan. 7, it’s an evening of relaxation, pasta-eating, and mingling with fellow marathoners. You’ll hear inspiring stories, watch marathon films, chat with others who offer tips.

10.) Race Expo. This is from Jan. 5 to 7. It is during this time that you can get your race packs: your New Balance shirts, race bibs, route maps, etc. Discounts will also be offered by Ayala Center tenants.

11.) Most painful/fulfilling moment. That’s what the 42K is about. It’s several hours of huffing, puffing, walking, running, drinking 100Plus, cramping, frowning, smiling–a range of experiences that you’ll never experience anywhere else but the marathon. These few hours will remain with you forever.