LA won Game 1, Boston won Game 2, LA won yesterday, Game 4 to Boston, Game 5 for Los Angeles, Game 6 to…. Game 7? This is the NBA Finale. That’s how it’s supposed to be. A seesaw. A pendulum. One swing here, another sway there. It’s a boxing fight of 10 men minus the red gloves.

Yesterday, I only saw the final 12 minutes. The hero of the game, of course, was Derek Fisher. He’s 35 years young and keeps four NBA championship rings at home—while many have none—yet, he’s still hungry for one more ring to make it all five for his fingers.

“Won the game for them,” said Doc Rivers. “Derek Fisher was the difference in the game. We lost our composure a little bit down the stretch — a 4-point game, all you need is a stop. We let Derek Fisher dribble the ball all the way up the court, unattended, get a three-point play. If you get a stop there, we had plenty of time. But that’s where we (need) the mental toughness. We’ve got to hang in there. It’s not going to be an easy game, none of them are going to be, and that’s what we have to do.” 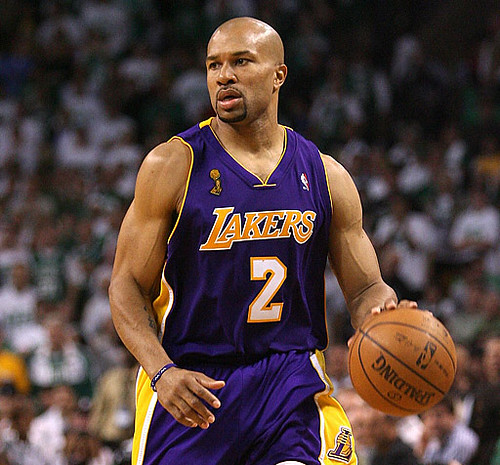 In all, Fisher netted 16 points—nothing too extraordinary a catch. But, when you examine that 11 of those points came in the fourth quarter, then that’s the reason why his team leads 2-1. “He’s our guy that pulls everyone together,” added Kobe Bryant of his teammate who stands as tall as my brother-in-law Rommel Desnacido at 6-foot-1.

“To come through tonight again for this team, 14 years in, after so many great moments, it’s always quite surreal,” said Fisher. “It’s quite humbling to experience it again and do it again. But it’s like being a kid, man. You just never get tired of candy.” For, with Derek Fisher, the NBA crown looks like candy. It’s tempting, sweet, mouth-watering and, once tasted, always desired.

How about Ray Allen? Wow, what a split personality. In Game 2, he converted eight 3-pointers. That was an NBA record. Yesterday? He attempted to smash another National Basketball Association record: 13 times he attempted, 13 times he missed—barely missing the all-time record for misses (14). “I thought all of his shots looked flat tonight,” said Boston coach Doc Rivers. “I don’t know if he had any legs.”

Maybe he overspent himself in Game 2. Like Robin Soderling who upset Roger Federer and squeezed out a five-set-win in the semis against Tomas Berdych in the French Open, only to lose stamina in the final against Rafa Nadal, maybe it was the same with Allen. “Ray went 0-for-13,” said Glen Davis. “Who would have ever thought that?

No one. Not even Ray. “This is why you always have to be humble, thankful,” said Allen. “You have to continue to work on things to make you successful. I never hang my head. Tomorrow is another opportunity.” That’s the spirit. That’s being positive. Let’s see what happens to his hot-and-cold hands in Saturday morning’s (RP time) Game 4. But, for now, the series is back where it belongs—home-court advantage for the Lakers. If they win the next game, it’s over for the Celtics. A 3-1 lead is insurmountable. Thus, Game 4 is a must, must-win for Kevin Garnett and Rajon Rondo. Win those 48 minutes of play time, then another in Game 5, then the pressure and pendulum shifts to the West Coast in Los Angeles. But these Green Goblins have to win the next two on their home turf.

One man is optimistic. He’s Paul Pierce. “The Lakers are a high-powered offensive team that is used to scoring in the 100s and we’ve got the game in the 80s,” he said. “It’s our type of game. Usually, we win these type of games.”

Usually. But LA is not your “usual” team; they’re the reigning champs. They’ve got KB24, Pau, Artest, Lamar, and the captain of their ship is Fisher.