Manny Villaruel, the sports editor of The Freeman, wrote it best in his eloquent and impassioned story last Tuesday entitled, Welcome home, Z ‘The Dream’ Gorres: “He was loved by fans for his being a gentle, humble and unassuming person. Following his miraculous recovery from a serious head injury he sustained in a fight that ended his boxing career in November last year, Cebuano fighter Z “The Dream” Gorres drew global attention and has gained, without doubt, more love and adoration.

“And after several months of staying away from home, a proud Filipino nation, the Cebuano community in particular, welcomes back its beloved son, who has since become a symbolic figure of true courage, immeasurable fighting spirit and strong faith in God…

“He may no longer have the physical capacity to achieve his dream, but Gorres can consider himself greater than a world champion for winning the biggest fight of his life.”

Zeta Celestino Gorres arrived home two days ago. At the Patio Isabel luncheon hosted by Antonio L. Aldeguer, the sports mediamen had an up-close look at the boxer nicknamed “Buchoy.”

How does he look? Can he talk? Move? He looks phenomenal. I gripped his right hand. He didn’t just shake hands with me. He gripped it right back. Firm. Tight. A powerful, forceful grip we engaged in for a few seconds. 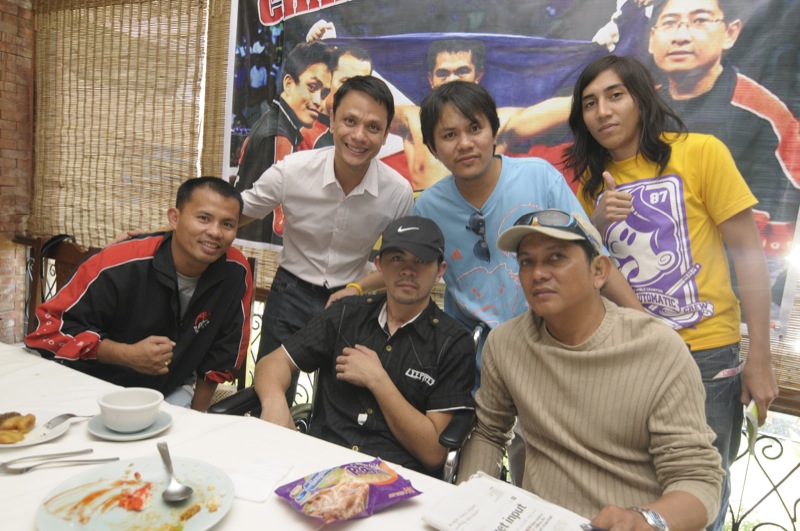 Talk? Yes, he can. In fact, Z has become funny. Very funny. When one of his lady friends asked whether he still remembers her, he paused for a few moments as everyone awaited and, in all seriousness, said, “Wala ko kaila nimo kay ni-gwapa ka (I didn’t recognize you because you became prettier).”

The girl laughed. I did. So did the others. Z smiled.

Z cried. For he was not a world champion. He won’t be; he’ll never be when he fell to the floor that Friday November the 13th evening. He did not bring home to Mandaue the gift the city awaited: a glittering boxing belt.

But he did more. Much more. For who, but a returning and healthy Z Gorres, could have commanded a convoy of more than 50 vehicles that greeted him at the airport and paraded the streets of Lapu-Lapu and Mandaue and Cebu?

Not MP. “Even Pacquiao did not attract that many cars who joined the welcome,” said Manny Villaruel, who was one of the many who trooped to the Mactan airport.

Z is no world champion. But he did more.

“Pa,” he told Antonio Lopez Aldeguer upon his return. “I’m sorry na dili ko ma world champ,” he said, calling Mr. Aldeguer “Pa,” having grown-up in the Aldeguer household and become like a younger brother to Chris, Michael and Jay. “You’re more than a champion,” ALA whispered to him. “You have touched people’s lives.”

Perfectly-said. For isn’t touching people’s lives our ultimate life goal? Isn’t it far nobler an achievement that just being one of boxing’s top-ranked?

Z’s last 90 days have grabbed more attention than almost any other in the boxing community. In Las Vegas, says Dr. Ben Calderon, these past three months have seen a multitude of articles devoted to Z’s condition and his fight for life. “The morning we left for the Philippines,” said top Internist in Nevada, “there was a story on the Las Vegas newspaper about Z.”

The story of Z has inspired the world’s boxing capital to finally enact a bill to help boxers. “Imagine, the medical expenses of Z amounted to over $500,000 and the insurance was only $50,000?” said Michael Aldeguer. “Because of the proposed ‘Z Gorres Bill,’ the insurance, for major and world title fights, will possibly be increased to $1,000,000.”