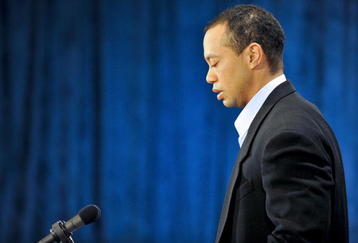 When Jasmin and I arrived home the other night, we switched on CNN. It was 12:35 a.m. We had just arrived from a late family dinner after watching the terrific show, ONE: A CONCERT FOR A BETTER WORLD, of our school, Bright Academy.

Watching the replay of his press conference minutes after it was shown live by CNN, I sat down in my bedroom couch. Jasmin wouldn’t glance. She detested Tiger. “He’s a fake,” she said.

Not the other night. Tiger looked scared. Gloomy. Unsure.  His face was anguished. It was obvious, based on the body language and his stammering… to say… the right…. words… out… loud… that this… was… all rehearsed for that maximum, I’m-so-sorry effect. “It looks so scripted,” said Jasmin.

What did Woods achieve with his appearance? Mixed results. Some further lambasted Tiger. Wrote Eva Rodriguez of The Washington Post yesterday, “I’ve never been more disgusted with Tiger Woods. I found his apology unbelievable, insincere, self-serving, self-indulgent, and narcissistic. (Long winded and repetitive, too.) The more he spoke about redemption, about becoming a better man, a better husband, a better father, a better Buddhist, a better role model for your children and mine, the more I wanted him to just shut up…. He did not owe us — you and me — an apology. That he delivered one just shows how meaningless it really was.”

Others, possibly from diehard fans, applauded his statement. Said Ruth Marcus, also of The Washington Post: “Well, that was excruciating. I’m not sure I’ve ever witnessed a more public, more extended self-flagellation…. The man walked in looking stricken. He walked out the same way. Maybe it was all an act, calculated to save sponsorships. If so, it was an extended and, I thought, convincing one. I’ve watched a lot of apologies in my day, mostly from politicians, and most of them annoy me. This one didn’t. Imagine having to do that, not only in front of millions, but in front of your mother.”

Mixed results. As for me, I’m glad Tiger has spoken. To recall, that mysterious tree-smashing car accident happened in Nov. 27. Now, finally, he’s emerged from the woods.

I’d have preferred, though, that he spoke sooner, maybe a week after? But Tiger is Tiger. He’s a control freak. In the same way that he controls his golf swing and the outcome of tournaments (mostly, to his favor), he wanted to control this bizarre situation. But, from what we’ve witnessed the past 2 1/2 months, he couldn’t. This story has transformed into a jackpot for the tabloids.

Or maybe Tiger could have opted for one-on-one with Larry King or Oprah. (Absolutely not in The View, for he’d have been roasted by Barbara Walters and Whoopi Goldberg!) With either Larry King or Oprah, he’d have appeared more human and personable, less stiff and less scripted.

Still, his actions won’t be forgotten soon. Not tomorrow. Not in 2010. Maybe never. Just look at the sorry examples of Hugh Grant or Bill Clinton or A-Rod or Boris Becker or Kobe Bryant or maybe even our own Manny Pacquiao to note that, while forgiven, these acts are rarely forgotten. Worse because of his clean-cut persona, he has to forever repair the damage inflicted upon the brand labeled “Tiger Woods.”