“Humbling.” That’s the first word uttered by Eduardo Gullas, the University of the Visayas president and Congressman of Cebu’s first district, when we spoke yesterday. “Humbling because the Lord was very kind to us this series,” he said. “Many thought this would be the end of our championships. But I told the boys after, ‘You are the champions… but maintain the spirit of humility.’” 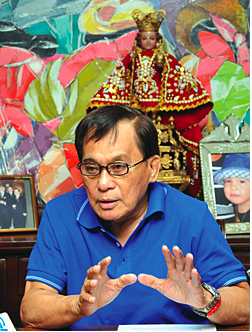 That word, “humility,” is a synonym for the name, “Eddiegul.” To the tens of thousands who’ve met him face-to-face, that’s one word best to describe Eddie Gullas: humble. This was most evident last Thursday night when, right before the start of the fourth quarter between the UV vs. UC final, the congressman arrived. He sat beside Cesafi Commissioner Felix Tiukinhoy. But that only lasted for three minutes. Because never mind if he had the best ringside seat inside the Cebu Coliseum, he opted to climb the bleachers and sit among the crowd. He’s simple, modest—a man for others, with others.

In our wide-ranging phone conversation yesterday afternoon which lasted over 20 minutes, I asked the Cebu Sports Hall of Fame awardee a variety of questions after UV won it’s 9th title…

“We’re now looking forward to the PCCL (Phil. Collegiate Champions League) on Nov. 23,” he said. “Meanwhile, I told the team to relax and have fun. Visit your loved ones.”

What would it mean, I asked, if UV won the national title? To recall, I mentioned to Eddiegul, “in 1957, UV won the inter-collegiate crown and you were adjudged by the Phil. Sportswriters Association (PSA) as the ‘Coach of the Year.’ What if UV wins this year? “That will be a big challenge,” he said. “The Manila teams are strong, especially Ateneo. And the NCAA champs, San Beda. Plus, the UAAP and NCAA numbers two, three and four are strong. But it’s not impossible. Still, it’s a big challenge for out-of-town teams. Also, the advantage with the Manila teams is their exposure to the PBA games.”

On his coaches Boy Cabahug and Al Solis? He said: “They are valuable. Boy and Al complement each other. If you recall, in his playing days, Cabahug was an offensive player. And Solis was point guard. And so Didi (Eddiegul’s son) made a good choice with their tandem. Boy focuses on the offense; Al on defense. Their skills complement each other. I saw this for myself several times when we had no sessions in Congress and I’d watch them practice in the UV gym.”

We also talked about Greg Slaughter, the 7-footer who wears jersey No. 7 and was named Cesafi co-MVP (with Jun Fajardo) this season. “According to Didi, he has not signed any contract yet with the SBP. Greg’s parents were here last month and they listed down four important points before Greg signs an agreement. Greg has been told to report to Manila and be with the Gilas squad. But I believe he has expressed his opinion asking if he can play for UV during the PCCL event. 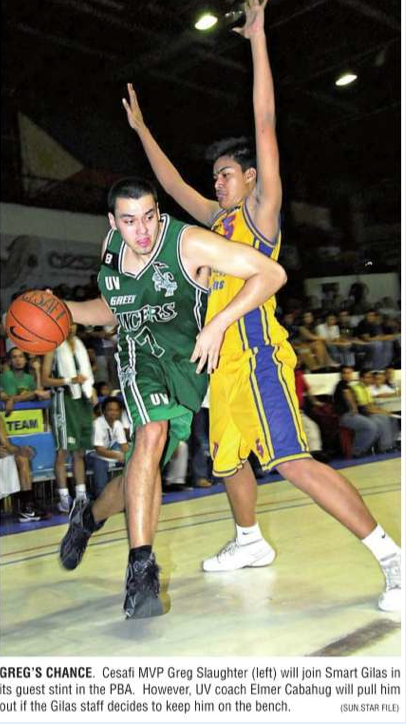 “As to Greg playing for UV next year? Well, there’s still a possibility although, on a scale of 1 to 10, I’d say it’s around 4 or 5. Personally, I’d like Greg to play one more season. Not only because our ‘Perfect 10’ dream would be enhanced, but also so that he can finish his Business Administration degree. Basketball is a contact sport and, if anything happens, it’s a big advantage. Also, if ever Greg goes back to the U.S., it won’t be difficult for him to land a job if he finished a college course.”

Finally, I queried: Why is UV unbeatable? What success secrets do you have?

“First, our coaches instill in the players a desire to be No. 1. A desire not to settle for No. 2. Second, our alumni is a big factor. They help out. In the different provinces, when they see good material, they contact us and even accompany the players to UV. This is unique. Third, I believe the all-out support of the UV administration helps. Right now, the younger boys have taken over the program. Jiji and Didi have given their full support. And now, it’s Sam-Sam. He’s very dedicated. And I believe, with the players, it has instilled in them a desire to give it their best. Fourth, prayer. I believe in prayers.”

(MORE: Read this article I wrote last May 2009 about the Gullas brothers Eddie and Dodong.)