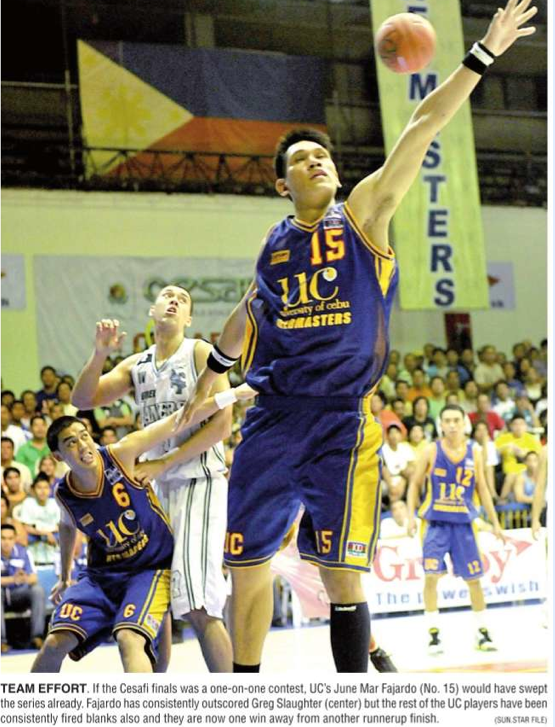 Ever since the Cebu Schools Athletic Foundation, Inc. (Cesafi) started in 2001, one name has emerged victorious in men’s collegiate basketball. For the past eight seasons, the University of the Visayas has been undefeated. They’re 8-0.

Will this number become nine out of nine tonight, when the UV Green Lancers, armed with a 2-1 lead in this best-of-five Finals series, meet the University of Cebu Webmasters in Game 4 tonight?

“This is our biggest game of the entire season,” said top lawyer Baldomero “Merong” Estenzo, who is UC’s Dean of the Law School and the basketball team manager, when we spoke yesterday morning. “If we win, we will have an excellent chance in Game 5 on Sunday. The momentum will be with us. Our players will have added morale.”

Of course, the big, two-lettered word is… “IF.” Because if UC loses, then it’s the end to another disappointing season—and another splendid year for the unbeatable Green Lancers.

“The key to UV’s wins has been their experience,” added Estenzo. “In Game 1, we led the entire game and only lost it in the last three minutes. Same with Game 2. We led but then UV came back. Good that we won that game in the end.”

In Game 2, UC again led, this time by as much as 16 points before UV sneaked back to lead 70-68 with just 32 seconds left to play. That’s when the heroics of Rommel Luceño arrived when he buried a three-pointer to give UC the win via overtime, 71-70. In last Tuesday’s Game 3, it was all-UV as the Lancers won, 81-67.

“Our players were very tired in Game 3,” said Estenzo. “Game 2 was played on Monday and, on Tuesday, we played Game 3. Unlike UV where they have a lot of second stringers, with us, we rely on a few key players for the entire ballgame. And so, playing back-to-back days, UC was tired. Also, that was a disadvantage to us because many of our players are rookies and not as experienced.”

As to UC’s star center, the 6-foot-9 Jun Mar Fajardo, how has he fared in the finals? “He knows he’s carrying the team. But, sometimes, he becomes too ‘gigil.’ Maybe because too much pressure is on him. At times, “ma-pugos niya and iyang duwa.” When’s he double- or triple-teamed, ma-pugos niya. He has to realize that, when he’s double-teamed, that leaves one teammate vacant. And with UC, there are plenty of good shooters.”
How has the Fajardo vs. Greg Slaughter one-on-one played so far? “Slaughter, no doubt, is a very valuable player for UV. He has the height. He has the heft. And he can stop Fajardo. But in Game 1, it was Fajardo who outplayed Slaughter. But in the next two games, it was Slaughter who dominated.

“What I told Bernard Ricablanca (UC’s athletic director) was for Fajardo to take advantage of his speed. He’s fast. For a person with his height, he’s fast. But I’ve noticed that he has the habit, in practice, of simply jogging. They should engage him with more sprints. Fajardo is extraordinary for a guy at 6-9. He’s not slow-footed. He has to take advantage of his speed. Like, for example, after he rebounds and passes the ball, he should sprint back. No one, especially Slaughter, will be able to catch him.”

When I asked Estenzo why UV, this entire decade, has been unbeatable, his reply was precise. “They have an excellent program. A program that’s geared towards winning championships. They have a deep bench. They have a lot of players. Lots of reserves. They can even form a second squad that can compete against everybody. And so, these second- and third-string players, after a year or two with UV, they’re already seasoned. It’s a continuous winning program.”

Finally, I asked Atty. Estenzo what it takes for UC to break the UV streak. “Our players need to trust each other. No one player can carry the whole team. Not even Fajardo. He needs the support of all players. We have to be a team.”