Six years ago, he started running. “I was getting older and noticed I wasn’t getting any healthier,” he said. “So, one day, I had a ‘Forrest Gump’ moment!”

Jim Abilla started walking. Then jogging. Then sprinting. Since 2003, he hasn’t stopped. Last Sunday, Nov. 1, while many of us lazed around and visited the cemetery, he stood at the starting line of the biggest marathon on earth. Here’s his story… 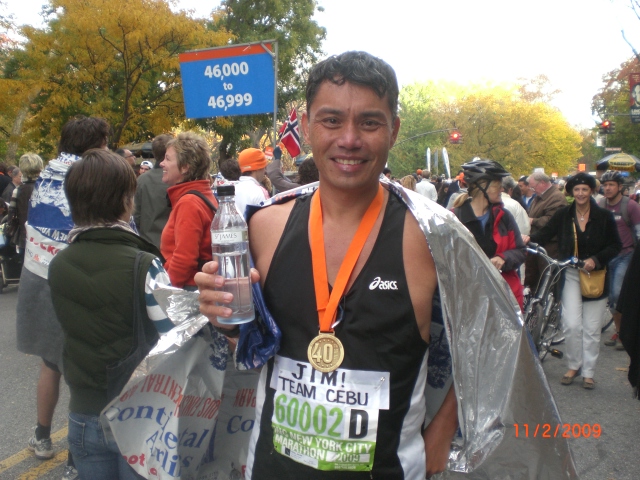 “The NY Marathon Class of ‘09 of 43,475 set out in three waves from both decks and lanes of the Verrazano Narrows Bridge. It was windy during the ascent and cold (50-degrees), but the atmosphere was festive. People were climbing the middle barriers and snapping pictures of the sea of people coming up the bridge!

“Every block of the course was lined with spectators. Except for the bridges, the entire course was filled with people holding signs, ringing cow bells, playing drums, encouraging runners. It made the option of walking disappear from my thoughts!

“At around mile 9, a woman next to me passed out and fell into the crowd. Medical personnel quickly attended to her, as did the crowd. There was no shortage of Gatorade and water. Medical stations were clearly marked and plentiful, and there were police officers at every intersection, which included either an ambulance, fire truck or aid station.

“GU gels were given at mile 16 and there were plenty of bananas, oranges, candy bars, pretzels and other goodies handed out. I felt the wall coming at mile 19 and was extremely hungry. Luckily, some people in the crowd handed me Snickers bars and a banana! After washing it down with Gatorade, I regained my strength and was able to continue on without ever walking any part of the course.

“One of the most inspirational sights I saw was passing groups called “Achilles Guides.” They are groups of pacers and medically trained runners who surround a special needs runner or someone who is running with an artificial limb. I passed at least four Achilles groups—at least two of them had a runner without legs and was running with spring metal limbs. I gave them a heartfelt “thumbs up.” Inspirational!

“Another runner had “HEART TRANSPLANT” printed in the back of his shirt. Yes, he was running with a transplanted heart. I’m curious to ask Dr. Peter Mancao what he thinks about that! Boy, what an inspiration!

“Anyway, I managed to come down the home stretch inside Central Park, at mile 23, too late to give up or walk. By this time, the crown is at critical mass, yelling “JIMMEEE” or “GO JIMBO!” How can you give up with that kind of welcome? So I found myself picking up the pace and continuing to ignore the knotted pain in my legs and calves.” 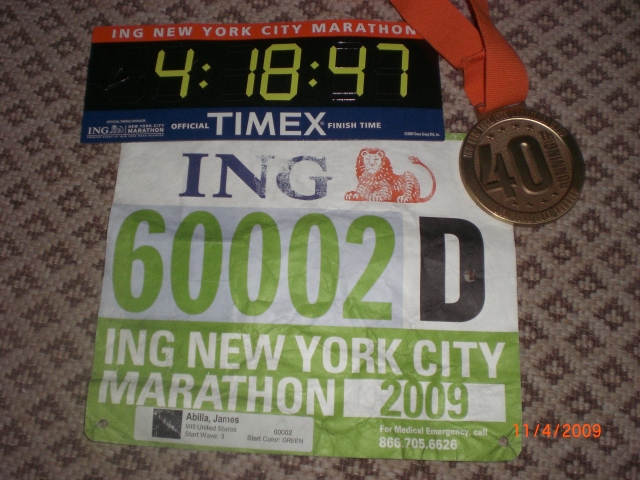 Jim finished with a personal record (PR) of 4:18:47. That’s speedy. So was the time of his wife, Margaret, who clocked 4:34. Prior to NYC, James, now 46, had finished six marathons. When I asked which was his favorite, the reply bounced back fast.

“New York is hands-down the best road race in the world. It was better than Chicago. The people of NY love the marathon, and New Yorkers are a splendid crowd. A large part of long-distance running is training, but it is the support of those who watch that eventually makes a world of difference when you have a little self-doubt. When several hundred thousand people are egging you on to continue and not give up, you feel that you must not let them down. Contrast that to a crowd that does not cheer and encourage – and you will know what I mean. Our local spectators could learn a lot from the welcoming spirit New Yorkers have. It is an unabashed quality of participation and gives the ‘spirit’ in the whole event. And yes, they yell your name. That’s why people write their names on their shirts!”

When I asked Jim, who owns the Cebu-based bottled water company “St. James,” what his next goals were, he had everything planned out. 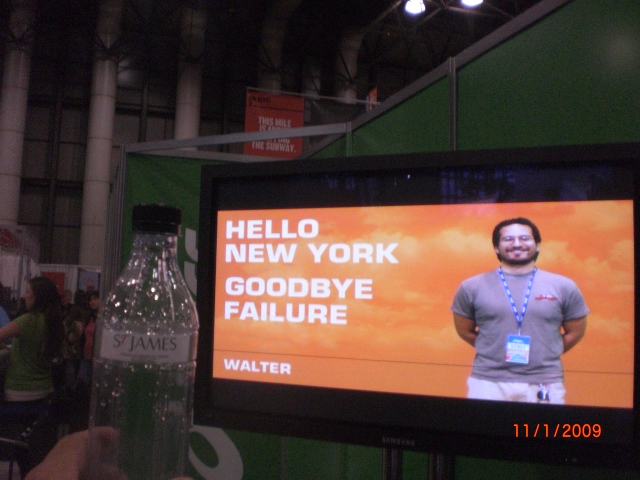 When did you start running? Why? Where?

I decided to start running to feel better about myself. I was getting older (approaching 40) and was noticed I was not getting any healthier. So one day, I just had a “forrest gump” moment! That was 6 years ago.

When did you start marathon running? Why?

I ran my first marathon in 2004 in Maui. It was the hottest, most difficult marathon I have ever done, particularly because I had no guidance on training and hydration. Maui looked like a nice place to vacation and run a marathon. Yes on the former, No on the latter. My time was almost 6 hours!

How did you register for New York (considering it’s difficult to gain entry)?

I had a rare opportunity to join the Asics Team thru Dr. Mancao’s brother who was connected with sponsorship events. There were 2 spots left and my wife an I took it in a heartbeat, especially since our contact has now since transferred to a different department! We have been trying to get into NY via lottery, and if you are turned down 3 times at the NY Marathon lottery, you are guaranteed an entry on your 4th application. So people can actually (eventually) get in if they just simply apply online via lottery.

Can you please name the 7 marathons that you did? Before NYC, what was your fastest?

Was NYC the best you’ve tried? Why is it different? People always say, “If there’s one marathon you’ll run, it has to be New York” Is this true, why or why not?

New York is hands-down the best road race in the world, so far, for me. It was better than Chicago. The people of NY love the marathon, and New Yorkers are a splendid crowd. A large part of long-distance running is training, but it is the support of those who watch that eventually makes a world of difference when you have a little self-doubt. When several hundred thousand people are egging you on to continue and not give up, you feel that you must not let them down. Contrast that to a crowd that does not cheer and encourage – and you will know what I mean. Our local spectators could learn a lot from the welcoming spirit New Yorkers have. It is an unabashed quality of participation and gives the “spirit” in the whole event. And yes, they yell your name. That’s why people write their names on their shirts! 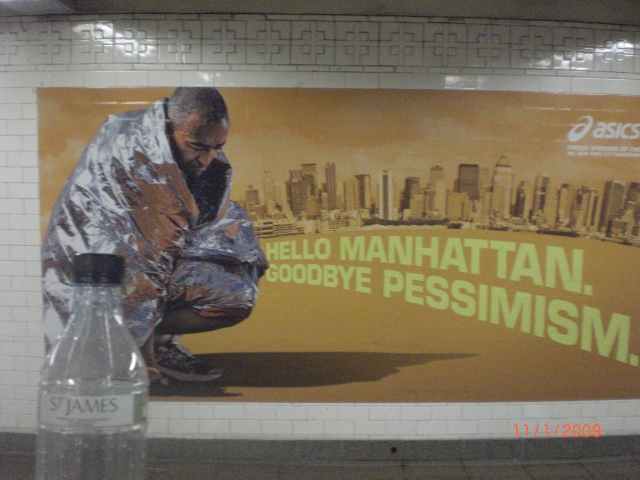 How young are you?

Your wife ran with you? How many 42Ks has she done?

Margaret and I ran the marathon together, but not together in the race. Marathon running for us is an individual sport, so we run our own pace without having to wait for each other. We meet up at the finish line. We started running together at the same time in the same races above.

When did you start St. James? Did you drink it before/after the race?

St James started last year and has been around the world more than any bottle of water on earth! I took it to a pilgrimage to Spain to get the blessing of St. James in his Cathedral in Santiago de Compostela, Spain. Yes, I have only St. James in my house in the U.S. and in Cebu. Soon, we will be exporting St. James to Japan and Singapore, the first exported premium water from Cebu!

How many years did you live in the States before moving back to Cebu? Or are you still moving back and forth between the U.S. and the Phils?

I studied Engineering at Cal Poly and finished my MBA at Berkeley when I moved to the U.S. in the 1990s. I now commute between the U.S. and Cebu every 3 weeks to visit the plant here. It’s a bit of a jet-lagger, but I get to read a lot of books.

You saw Ed Norton and Alanis during the race?

I did not see Ed Norton but did pass a group of Masai that was running with Alanis early on in the race. I did not recognize her then but I realized after that it was her after connecting the Masai and Ed and Alanis. They were running for a charity in Africa for the Masai Tribesmen. Didn’t quite catch up with Ed Norton, but certainly beat Alanis Morriset, hehe. 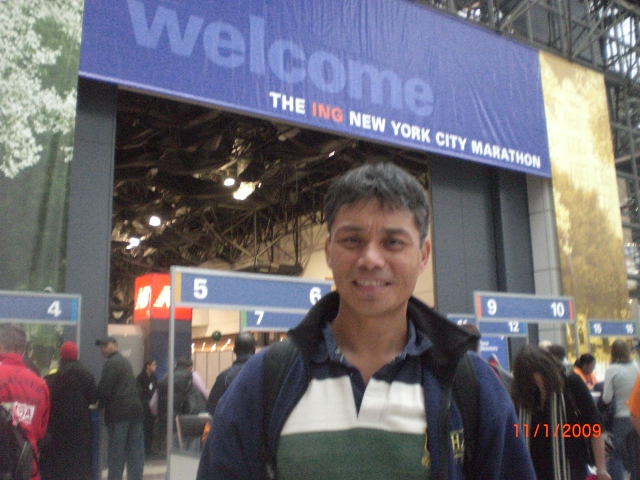