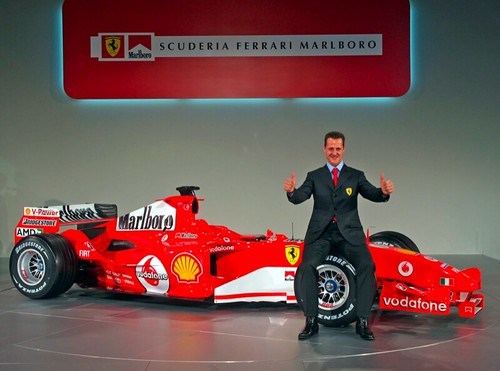 Can you believe Schumi is back? Retired since 2006, later this month he’ll be in Valencia, Spain to drive a familiar color: Red. The winner of seven F1 titles, Michael Shumacher, replaces the recuperating Felipe Massa.

”Though it is true that the Formula One chapter has long been closed for me, it is also true that for team loyalty reasons I cannot ignore that unfortunate situation,” said Schumacher. ”But as the competitor I am, I also very much look forward to facing this challenge.”

I’ll make a testimonial: While I followed F1 when the German drove for Ferrari, after he retired, I braked. And stopped. Same scenario for me with Michael Jordan. Same when Lance Armstrong left.

Now, I’m back. The same, I bet, is true for millions on non-fanatics worldwide: Schumi’s return will reenergize the controversy-laden F1.