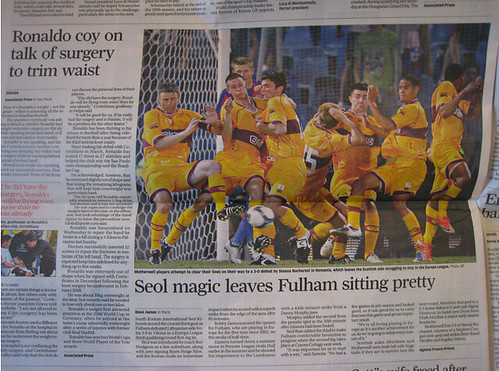 HONG KONG—Scanning the sports sections of the two leading English newspapers here, South China Morning Post and China Daily, as I did the past week, one will find that Hong Kong’s five most popular sports are: Number one, soccer. No. 2: the sport with 11 players per team on-field. Three, the game whose favorite Sun.Star columnists are Mike Limpag and Noel Villaflor. Four: it’s an activity played on a rectangular-shaped grass field with goalies on each wing. Fifth, it’s also called… surprise… football!

Yes. In this Chinese self-governing territory that is one of the richest locations on earth (HK’s GDP- per capita of $43,800 is the world’s 14th highest while our beloved country, at $3,300, languishes at No. 162), I ask: what is the one game that is followed the most—well, excluding the “gambling sport” of horse-racing? Kicking. Yup, the sport of the feet. Take the China Daily. Last Thursday, a giant photo of Ronaldo, sporting a thumbs up sign, decorates the sports section. The title reads, “Ronaldo opens Real account,” and the seven-paragraph story explains how the man who was paid 94 million euros converted a penalty for Real Madrid’s 4-2 win over Liga de Quito. 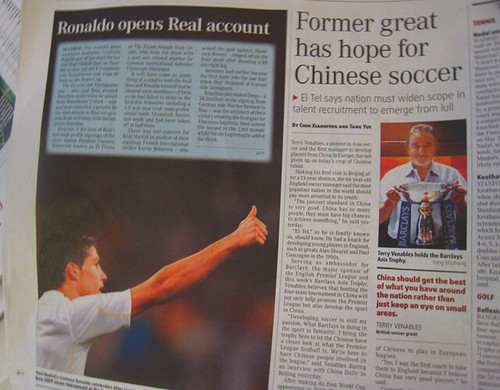 Beside that article is “Former great has hope for Chinese soccer,” a 22-paragraph-long piece on Terry Venables, the 66-year-old England soccer manager, who said that “the most populous nation in the world should pay more attention to its youth.” Below that write-up is another soccer story: “Ancelotti plans to breathe new life in Chelsea.” All soccer-talk, all the time.

“Rooney takes helm as Man U fan favorite,” in full color, speaks of Manchester United’s recent visit to China and how, as Chen Xiangfeng, the newspaper writer who penned the story put it, “Wayne Rooney is one of the biggest reasons why the Red Devils’ fame has continued to soar in China without Ronaldo.” Wayne Rooney’s full-body photo is, of course, found at the article’s center. 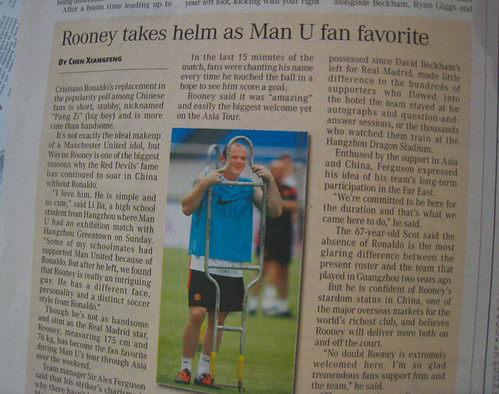 There’s “China’s malaise saddens Charlton,” where Man U great Bobby Charlton said, “What really saddens me is that a country the size of China doesn’t have the wherewithal to qualify on a regular basis for the World Cup.” Interesting point. He looks at Japan and the two Koreas (perennial World Cup qualifiers) and says, “I think there has to be a longer look at where Chinese football is going. I have so many friends here and I am desperate to see them smiling and not being miserable.” 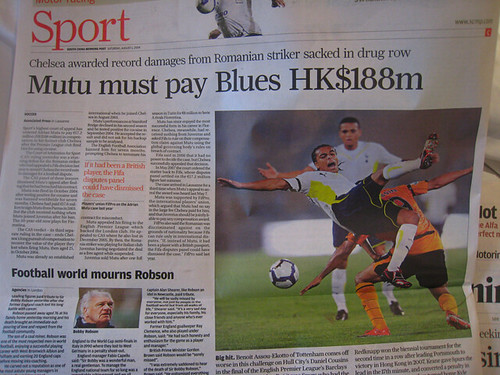 On to the South China Morning Post… Last Friday, the discussion was on Franck Ribery’s price tag of “at least US$140 million.” Above that piece was a giant, full-color picture of Scott McDonald of the Celtics.

Newspapers only? No, no. Surveying the TV networks, my wife Jasmin and I spotted three local channels devoted to sports—all soccer.

Shopping? The same. On Park Lane, the famous strip in Tsim Sha Tsui, if you enter Royal Sporting Goods or Marathon Sports or Nike, the most prominently-displayed items are of the you-know-what sport.

Same with what you see along the famous district called Causeway Bay: a colossal billboard, one of several by adidas, where a humongous blue soccer shoe of Lionel Messi (the F50i) is on giant display.

My thinking? If only Cebu, I’m sure Mike and Noel and the thousands of fanatics would ask, were like HK.