He is the Burj Dubai, the world’s tallest skyscraper. The Empire State Building. He’s Taipei 101. He’s the Marco Polo Hotel of Cebu basketball who is statuesque and overlooking while the rest of the buildings sit below his monstrous shadow.

Last Thursday night at the Cebu Coliseum and together with 10,000 standing-room-only fans, I watched Game 1 of the UV vs. USJ-R Cesafi finals.

One behemoth dominated. No, sorry, he didn’t dominate—he lorded. On this game where you shoot at the 10-foot-tall ring, his nearly 7-foot-tall frame—plus those outstretched hands that would dwarf Michael Phelps’—he reigned supreme. He lorded tall in the forest like a towering giraffe looking down at the jaguars. And, by jaguars, yes, I mean the USJ-R Jaguars.

Greg Slaughter, whom I watched last year and who was then ridiculed for being too slender, too clumsy and too awkward-moving, has now turned into a brawny, confident and herculean of an athlete. 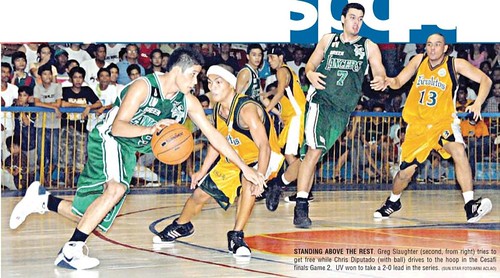 Standing one inch shy of seven feet tall, he is, regardless of whatever sport he enters excluding chess, expected to be dominant. And what domination Greg displayed in Game 1.

He stood inside the shaded area and, when opponents like Lyndon Gudez and Jabe Delfino attempted to sprint down the lane and hover on air like Michael Jordan, this Hakeem Olajuwon would extend his arms to the Cebu Coliseum ceiling and scare the enemy. The result? A forced shot. A miss. Greg also drew a lot of fouls. In the few minutes as soon as he entered, the defense would wrap themselves around him—resulting to foul after foul.

In offense, he’s invincible. Think about it: How can a 6-foot-4 defender, for example, stop someone seven inches taller? You can’t. You push, stand your ground, but when that backbone leans on you like the Leaning Tower of Pisa, you have no chance. He’ll score. And, last Thursday, Greg Slaughter massacred the Recoletos dribblers with 23 points.

He’d flip his body for a sky hook. He’d catch a pass from the excellent UV point guard, Chris Diputado, and score a simple lay-up. He’s unstoppable. And, yes, let me say this: a superstar. For while this city has discovered dozens of basketball superstars the past decades—Mon Fernandez, Elmer “Boy” Cabahug, Jojo Lastimosa, Al Solis, Don-Don Hontiveros and many more—this ‘008, we have a new shooting star: Mr. Slaughter.

I was seated beside my idol on this paper’s Opinion Section page, Atty. Frank Malilong, who, apart from being a UV alumnus (he wore a green Lacoste shirt), was also the UV basketball team’s manager from 1981 to ‘93. Seated beside him was Dr. Rhoel Dejano. Whenever Greg would score or intimidate an opponent by just standing straight, Frank and I would look at each other and, because it was too loud with both schools’ drums banging, simply smile and shake our heads in amazement.

The “defining moment,” as Atty. Malilong aptly put it, came seconds before the end of the 3rd quarter. The USJ-R players attempted a shot, missed and, while several players jumped to rebound—guess what?—Mr. Giant Slaughter stands—he doesn’t even jump an inch—and, with one hand, pulls the orange ball like a magnet. No kidding. While plenty jumped, Greg stood still, just stretched his arm and—voila!—got the rebound.

And here’s more. Unlike Shaq, this center of centers is excellent at the free throw lane. In my count, he attempted nine free throws and made eight. That’s an 88 % clip.

Which is why I urge all Cebuanos to watch the CESAFI final. Tonight at 6:30 p.m. is Game 2 at the Cebu Coliseum. And, while I believe that the Green Lancers are an indomitable squad—though I wish USJ-R would win tonight and level the series—this I ask you to do…..