One act of kindness that I will never forget happened last February 17. Together with 13 others from Cebu, I joined the Hong Kong Marathon. After the starting gun fired at 6:45 in the morning, off we jogged, traversing the asphalted roads, climbing bridges, crawling under the tunnels when, suddenly at Km. 28, both my legs cramped and, worse, I had intolerable pain at the sides of my knees. I winced in distress, walked crippled, felt like my knees had been hammered by a baseball bat.

Dr. Peter Mancao passed-by. While I asked that he proceed, he stopped, asked for liniment, rubbed it on my knees, asked for cold sponges and smothered those on my injured legs. For the next several kilometers—like a good doctor would accompany an ailing patient—Dr. Mancao did the same. And, it wasn’t until the 35th km. while under the Western Harbour Tunnel when I sat tortured by the knee pain, that I forced him to run. Reluctantly, he did.

I didn’t finish the Hong Kong Marathon—but that act of kindness I will forever remember: For here was one of Cebu’s top heart surgeons (and the man who organizes the Run For Your Heart races) who runs with a kind heart. 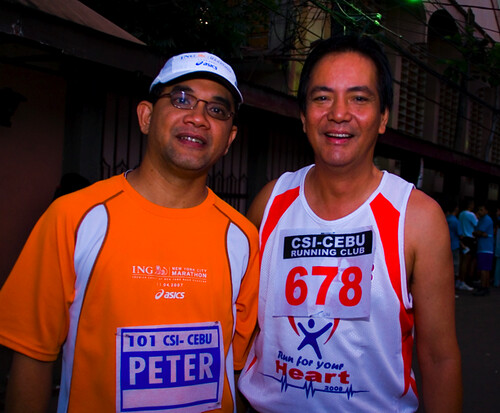 CHICAGO. This Sunday, together with Dr. Yong Larrazabal, Peter will embark to finish his third 42K race.

Why Chicago? I asked. “The Chicago Marathon is one of the five most prestigious marathons in the world (with NYC, Boston, London and Berlin). That’s one of our goals, to run in all of those 5 marathons,” Dr. Mancao said.

“Looking back two years ago, who would think that I’d be running my 3rd marathon by this time. Never did I imagine that this would be happening. The plan when I started running was just to run 5-km. 3x a week. Joining a marathon was like planning a trip to the moon!

“When my brother Nonie got us into the NY marathon, the plan was just to run half of the NY marathon or, two hours, whichever came first. When Yong Larrazabal heard of that plan he crafted a training program for me plus loaned his personal coach, Charlie Beberio, to supervise my training. The rest is history.

“But the untold story of last year’s run in NY was after I crossed the Verrazano Bridge, which was just 5km into the race, I was having terrible shin pains and was already thinking of quitting. But the first thing that came into my mind was your article before I left for NY announcing to the whole of Cebu that we will be running the marathon.

“I said to myself, “Sus, ka uwaw if I quit and just 5km pa into the race.” So I told myself just get to the 8-mile marker where my support group was waiting and then re-evaluate. But when I saw them at Mile 8 waving those Philippine flags, I had this adrenaline rush…. so I set the half-marathon mark as my next goal until i eventually got to finish. 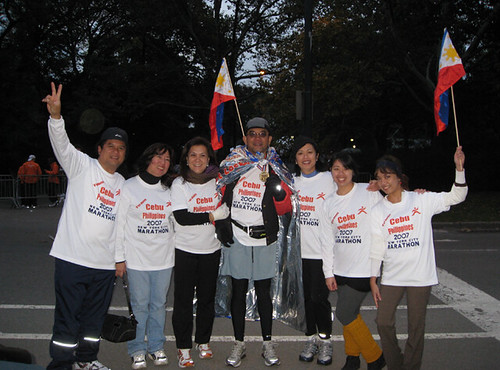 “That was supposed to be the first and last marathon. When we went to Hong Kong last February, the plan was to run the half marathon but my friends from the CERC (Cebu Executives Runners Club) were able to convince me to run the full marathon and I was surprised to finish despite just running 5K 3-4x a week. I think this may be due to the fact that I’ve never stopped running since I started in July of 2006.” 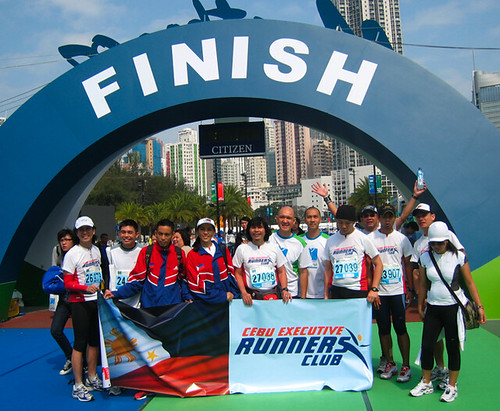 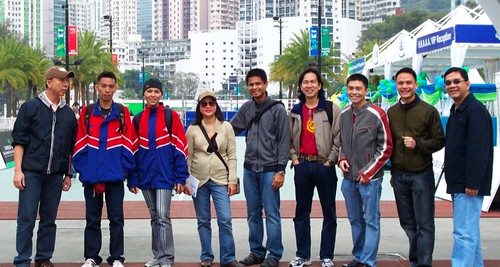 When I asked Dr. Mancao if he has any goals this weekend, he answered, “This is my first time in Chicago so this will be a sight-seeing run, taking pictures and texting people. I should be able to beat my personal record… Ha-ha! (5:31, HK). My U.P. High classmates say they will also be cheering along the route.”

Why, I asked, join one of the most excruciating of events… the marathon?

“Why? Things that I have been very passionate about take at least fours to finish (heart surgery and golf) so I was not surprised I got hooked to running. When i run i just imagine myself  going through the motions of doing a bypass and when I’m done imagine myself playing 18 holes of golf. But in the end it is still “the thrill of victory and the agony of the feet!!!” 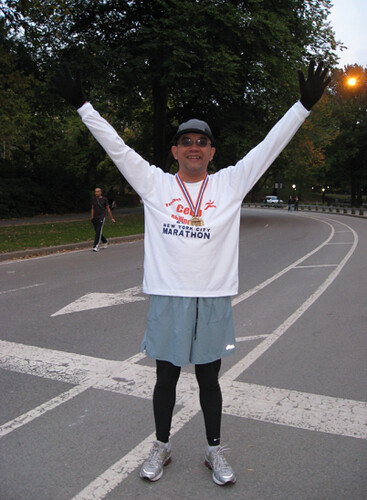