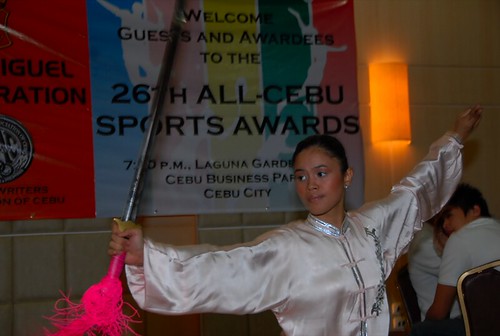 While our taekwondo jins, our amateur boxer, our swimmers, archer, diver and the rest of the 15-person RP delegation to the Beijing Games disappointed our nation, one sport and one athlete made us proud.

Participated in a field of over 40 nations, Willy Wang joined the demonstration sport of Wushu. No, it wasn’t counted in the official medals tally but, hey, a gold medal is a glistening gold metal. And not only did Wang, 24, take home the top prize—our RP delegation won more: one silver and two bronze medals.

“I had lunch with Willy last Monday,” said Francis Onglatco, the founding chairman of the Central Visayas Chapter of the Philippine Wushu Federation, when we spoke over the phone yesterday. “Willy is now a celebrity. And, just a few days ago, the team was given another million pesos by San Miguel to add to the millions they’ve received.”

Francis Onglatco, a top Cebu businessman and my fellow member (he’s past president) at the Rotary Club of Cebu West, traces his roots with martial arts decades back “during my late teens when I joined different kinds of martial arts.”

“Wushu is the generic name for martial arts,” Francis explained. I checked Wikipedia and, true enough, it says “wushu literally means martial art.” The website adds: “The term Wushu consists of two Chinese characters; ‘wu’ means martial or military, and ‘shu’ translates into discipline, skill or method. Together, these form ‘wushu’ meaning ‘art of fighting’ but translated as ‘martial art.’”

“At the Beijing Olympics, 13 medals were at stake with wushu,” said Francis. “This was divided into different categories with eight medals for the ‘Forms’ competition (empty-hand and weapons routines). There’s also a category for full-contact. Willy won the nanquian (forms) event.”

Wushu, as we know, was a non-bearing event. Like Arianne Cerdeña when she won the gold medal in bowling at the 1988 Seoul Olympics, Willy Wang’s achievement isn’t, as critics say, “a true gold medal.”

Still, gold is gold. I watched the awarding ceremony and it had the same luster of the other events: Willy stepped on the middle podium, the Philippine anthem was played, the RP was raised high and Willy received the same gold.

Is there a chance for wushu to be an official part of the Olympics?

“Very good chance!” Francis replied. “From my talks with the RP wushu officials at their Manila headquarters last week, the International Olympic Committee (IOC) officials were impressed by how the event was hosted. They saw the competition first-hand and witnessed plenty of competitors. Remember, wushu is played in 123 countries. So, there’s a very good chance!”

But then again, nobody knows how, or when, the IOC will decide on wushu. Take the case of bowling: It’s a popular sport—but it’s not in the Olympics.

Francis admits the challenges. “We’ll never know how if wushu will be admitted, for sure. There is politics in international sports. Also, for a time, there was a lack of international referees. Plus, the seminars on wushu were written in Mandarin—difficult for the rest of the world. But, this has changed,” he said.

“With wushu, I hope it follows the same path as taekwondo. In the 1980s, it was a demonstration sport until it was finally admitted. Look at the popularity of taekwondo now—a sport, by the way, that we used to dominate.”

Who knows? Maybe wushu—not boxing or taekwondo—will be the sport to record RP’s first-ever gold medal. And, if it’s included in the 2012 Games, a Cebu-based athlete may emerge as our winner.

Mary Stephanie Agbay, only 18, is one of the world’s top wushu artists. Ranked 7th in the world, she missed joining the Beijing Games (“by .02 points,” said Francis) because only the world’s top six were included.

Now in Manila training with Willy Wang and the rest of the RP delegation, she and her sister Evangeline, 15, plus two more names in the national training pool (Paula June Ponce and Michelle Marie Puche) have a chance at that Olympic gold.