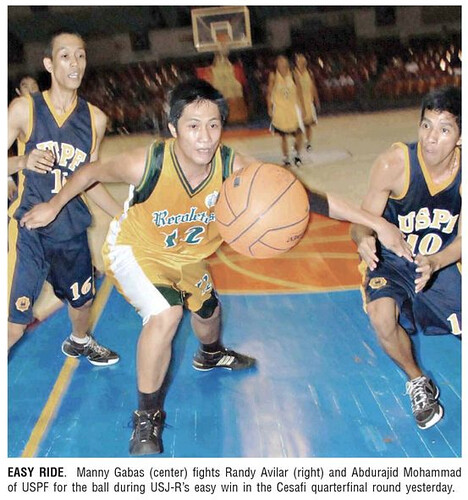 Calling all High School students who love sports! This Sept. 27, the Sportswriters Association of Cebu (SAC), together with Hapee Toothpaste, will hold a Sports Quiz at the Ayala Center Cebu. The grand prize winner gets an Asus Eee PC while the 2nd placer receives a cell phone—all these apart from having your name splashed on newspapers and appearing on SkyCable’s Blue Info Club Channel 45. How does the contest work? Simple. A maximum of 30 high-schoolers will be asked dozens of sports questions with the highest-pointer the winner. If you’re interested, email me at [email protected]

Roger Federer. He’ll win his 5th straight US Open title today. Wow! Imagine that. At this time last year, after Roger won his 12th Grand Slam title, many hailed him as “The Greatest.” But, 12 months have passed and he has yet to win another major. Until today. Against Andy (not Roddick) Murray, Roger is lucky. Though the Briton has a surprising 2-1 record against the Swiss, Roger’s not facing a leftie who’s dominated their rivalry.

What happened to Rafa? In one word: fatigue. As muscular as the Spaniard is, he’s debilitated. You don’t win the French, Wimbledon, Rogers Cup in Canada, then fly to Beijing, collect the gold, come back to New York and not feel languid.

As to Roger? If the US basketball squad was named “Redeem Team,” I have an RF slogan: Redeem Him. Because while this season was his most disappointing in five years, with this one victory today, he’ll redeem it all. As pointed out by my tennis best friend, Macky Michael, “it’s kinda like Pete (Sampras) in ’96. He salvaged the year by winning the last major.”

How about that yearend No.1 ranking? This will be intriguing. Because while Rafa won two majors and (granted he wins today) Roger wins one, it will go down to the Masters Cup in Shanghai. Yep, the No.1 ranking might get decided in China. So, for all those who’ve long wanted to tour Shanghai (at the perfectly “cool” month of November), book your tickets now!

Ateneo. Last Saturday afternoon, the two teams with the most storied rivalry in RP sports met. For Ateneo, it was a chance to uphold their No.1 standing—and to beat the defending champions, La Salle. For the school along Taft Ave., the impetus was to embarrass their foe from the Loyola Heights campus.

In the end, watched here in Cebu by hordes of alumni from both camps at the mall colored blue (SM City), the Blue Eagles prevailed, 65-57.

Dr. Ronnie Medalle, whose son Stevie is studying at the ADMU, was at the Araneta Coliseum and watched the game live. His text message that afternoon: “Partner, unbelievable atmosphere. Think I will be stone deaf after the game!”

CESAFI. Closer to home, this year I have yet to visit the Cebu Coliseum and watch our own version of the UAAP… the CESAFI. But I will very soon. Last Sunday, the quarterfinals got underway and, as expected, the two strongest teams prevailed: UV and USJ-R. (The remaining two semi-finals slots were filled last night.)

I watched several games last year and, must say, it was a thrill. To me, the ’07 UV vs. USC finals contest stood out tallest. Undefeated since CESAFI was formed in 2001, the UV Green Lancers was under siege by the smaller (yet quicker) USC Warriors. What a battle, with UV snatching the crown in Game 5.

“In all, 2007 was the best in Cesafi history—and maybe tops in all of Cebu collegiate history,” I wrote last October. “When I watched the UV-USC Game 4, drums rolled, green and white balloons danced, shouts reverberated against the parquet floor, and sweat dripped from the faces of the thousands of spectators who swelled the Cebu Coliseum.”

I’ll be back to watch CESAFI very soon. For I don’t want to miss out on all the fun. As CESAFI’s deputy commissioner (and The Freeman columnist) Rico Navarro said last year:

“No other basketball event in ’07 has been able to draw this kind of madness and mayhem. Not even the PBA. The CESAFI Finals is undeniably the biggest basketball show in town.”