One is the undisputed titleholder on grass. He’s won 65 of the last 65 on the greens; 40 straight on this tournament that you’ve probably heard of, Wimbledon. The other is the undisputed combatant on clay. Of 117 matches on the red dirt, he’s won 115; he’s 28 of 28 matches at another event you probably know: the French Open.

Tonight, the two settle the score. They’ll score. One against one. Nobody else on the boxing ring—or, the 78-ft. x 27-ft. tennis court rectangle, it’s called—will be there, not even the presence beside their chairs of their coaches or trainers.

This title fight is compelling because of how similar—and dissimilar—these two champions look. They both wear Nike. They’re 6-foot-1. They both wear white. They both have first-names that begin with “R” and represent countries that start with “S.” 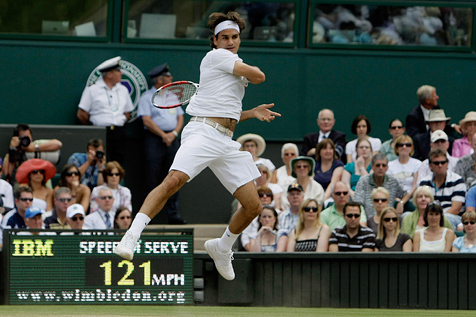 Yet, they’re opposites….. R is right-handed; R is left-handed. Roger uses a Wilson K Factor Six-One Tour 90 sword while Rafa swings with a Babolat AeroPro Drive. The Swiss has won $41 million in prize money while the Spaniard, $18 million. Roger is 26 years old; Rafa is four years younger. But, beyond age and looks and racquets, they’re most unlike in their personality…

Because while Roger is as cool as the Swiss Alps, Rafa is robust, like a Spanish bull. Roger rarely smiles nor smirks and show’s zero emotion while Rafa pumps his fist, shouts “VAMOS!,” and scratches his, um… behind. 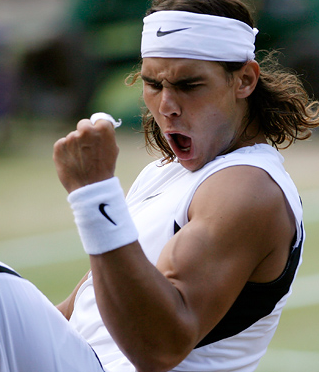 Like Bjorn Borg vs. John McEnroe or Pete Sampras against Andre Agassi, their being so distinct from each other makes this final compelling.

What’s at stake tonight? If he wins, Roger becomes the first player since William Renshaw to win six straight at the All-England Club. How long ago was Renshaw’s feat? From 1881-86. That’s 122 years ago! 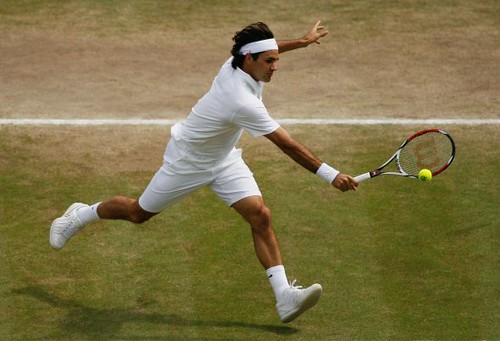 Yet, the big question remains: Will Roger’s humiliating loss to Rafa at the French Open final—winning only four games in one of the most lopsided Grand Slam finals in history—be a factor later?

“Paris was a disappointment,” said Federer. “It’s important to bounce back from that loss. I hardly remember anything of it.”

To us, mortals, that’s impossible. Not remember anything? Oh, come on.

But then again, Roger is no mortal. A week after that debilitating loss in Paris, he wins the Gerry Webber Open grass-court event and, thus far in six matches at Wimbledon, he hasn’t lost a set. He’s out of this world. Like Venus. So, let’s see.

But here’s a crucial point to remember: In their last 10 meetings, the winner of the first set has gone on to win nine times. This shows us how crucial snaring that first set is.

My pick? While I cheered for Roger Federer to collect his first-ever French Open trophy at Roland Garros, I’ll reverse gears and cheer the same for Rafael Nadal to hold up high the Wimbledon crown—his first.

Why? Simply because he’s playing better than ever. After Rafa crushed Roger in Paris, he won the Queens grass-court tournament, beating the likes of Andy Roddick and Novak Djokovic. His serve—a left-handed spinner—is mightier. His backhand—which used to be just a steady shot—is now a blistering cross-court-shot weapon. And his forehand… well, it’s the best among earthlings. Plus, if we look back to 12 months ago, Nadal was so close to being triumphant at Wimbledon: In the fifth set against Federer, he owned four break points—which are pseudo “match points”—but failed to convert any. Had he won one of those…..

Watch for The Incredible Hulk to flex his muscles, turn green on the green, and pummel James Bond. 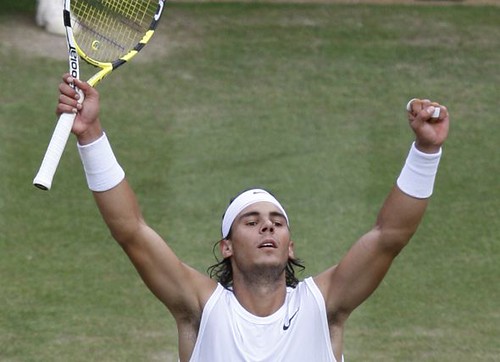