They are two of the most celebrated siblings on this planet. They are rivals, doubles partners, Olympic gold medalists, fashion icons, Grand Slam champions, magazine cover models and yet, amidst all their similarities, they are opposites.

Venus is tall. She’s lean. Her legs are bamboo poles. Her arms as slender as spaghetti. She’s 6-foot-1 and weighs only 160 lbs.

Serena is large-scale. Her physique is, so unlike Manny Pacquiao’s, heavyweight-like. She’s massive, imposing, sizable. Her legs are two Veco posts. Her arms as sturdy as Grade-A steel. At 5 feet, 11 inches, she weighs, according to Wikipedia, a reported 180 lbs. 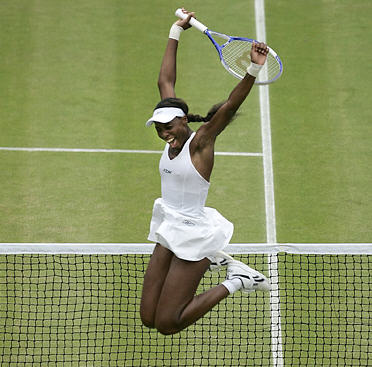 Yet, as opposite as they are to our bare eyes, they are sisters. No, they’re not twins—but they are like twins. They travel together, shop in shops from Paris to London together, they dine together and, their homes? Of course, not far apart, together at Palm Beach Gardens, Florida.

Venus and Serena are two of the most famous athletes of any sport. Mention their first names to any game-loving person and, for sure, you’ll get an “Oh! You mean the Williams’ sisters!” reply.

Well, in the grandest stage in tennis formally called “The Championships” but otherwise known to us all as “Wimbledon,” guess what? Venus and Serena are two of the last four standing and, if Venus beats Elena Dementieva and Serena subdies Zheng Jie in the semi-finals, they’ll meet in a familiar setting: another Grand Slam singles final.

In all, the best friends have met 16 times—with Serena narrowly edging Venus, 9 wins to 7. But, when the stakes are higher in Grand Slam finals, they’ve met six times and Serena has further dominated, winning 5 of 6.

Wimbledon. Ahhh… It’s tennis’ version of The Masters, the NBA Finals, the FIFA World Cup. And, on this stage when the grass is green and the clothing is white, no one among the women has tyrannized the competition more than the Williams’.

And come this Saturday, when the ladies’ final is announced, I’m as sure as we all were sure than Pacquiao would clobber David Diaz, that a familiar family name will be etched on the winner’s plate: Williams. 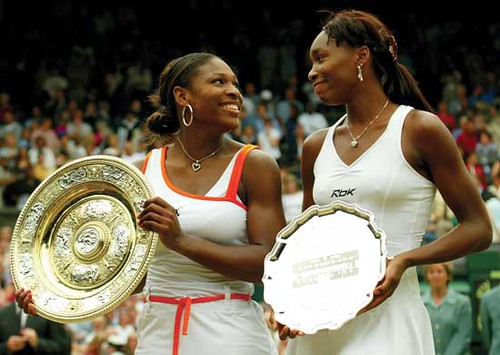 Why? Why the monopoly? And how have these two sisters enslaved and domineered over the women’s race?

First, muscle. Including the men but excluding Rafa, are there any players with more brawn, thicker biceps, and more durable flesh than the Williams’? In tennis, muscle is significant because it translates to strength which transforms to power which converts to backhands that fly and forehands that say, “Pronto!” and opponents that surrender and say, “No more!”

Second reason: The serve. In Wimbledon, the single most valuable shot is that first bang of the racquet with the yellow ball. And, unlike club-level players like you and me who say, “We start the point with a serve,” among these professionals, their motto is this: “We end the point with a serve!”

That’s the slogan of the W. sisters. That’s why they’ll win W.

As to the world’s no.1 and no.2, the two most tempting darlings of tennis—and, possibly, in all of sport—what happened to Ana and Maria? Put simply, the two 6-foot-1 skyscrapers soared too high then plunged. It happens to everyone. Even the snow atop Mt. Everest is blown away. It’s just unfortunate that both plummeted, like Twin Towers, one after the other.

Which brings me back to the number 6 and 7 seeds, Serena and Venus. Who’s my pick when the two meet this weekend? It’s a tough choice. Serena has mastered her elder sister’s psyche; Venus has won four Wimbledons, owns a record-booming 127-mph serve, and is the defending title-holder.

But, given a pick, I’d go with the burly, muscular pole. 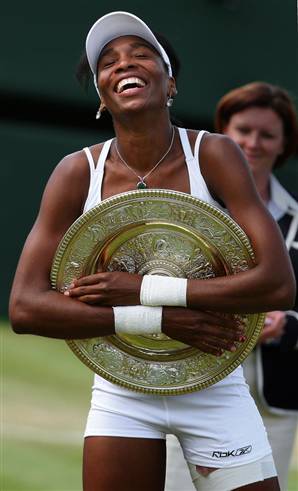 That grin…. or this smile? 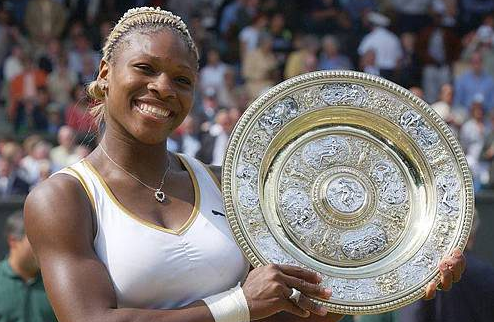