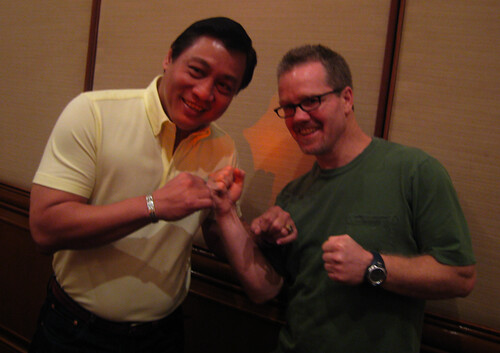 At 1 p.m. yesterday, with the sound of rubber shoes squeaking against the parquet floor and the noise of shouts echoing and basketballs bouncing in the background, I spoke to a man as legendary to Cebu basketball as Phil Jackson is to the NBA.

He has won more titles in Cebu basketball—and possibly, nationwide—than any other coach in history. As head coach of the M. Lhuillier squad—and top honcho of other ball-clubs throughout his several-decades-long tenure—he has amassed 50, 100, 150, maybe 200 trophies. In four short words: Too Many To Count. 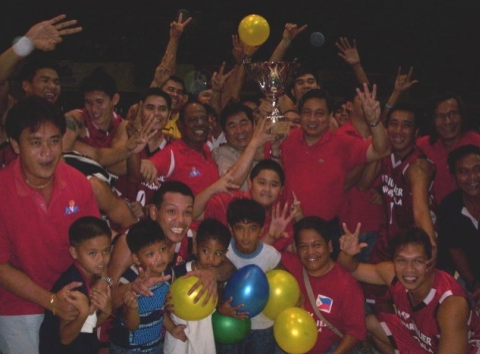 Plus, he is a businessman (Yayoy’s Grill, among other ventures) and, as we all know, he’s on his second term as Cebu City Councilor.

I called Raul “Yayoy” Alcoseba yesterday to seek an expert’s thoughts about a true-to-life movie that starts airing tomorrow…..

Did you anticipate this? At the start of the season? That L.A. would reach the finals?

“In the beginning, no. I was for San Antonio. They were the defending champions,” he said. “But, in the middle of the season when the Lakers got Pau Gasol—they started winning. And that’s when I realized that the Lakers have a great chance of being the West champions.”

Which fan are you: Lakers or Celtics?

“Not so,” Yayoy said. “During that time, TV coverage of the NBA wasn’t there. But I saw many footages of Russell, Chamberlain, Jerry West, Havlicek.”

“Yes, it’s important,” he replied, “but it’s only an advantage if you win all your home court games. If you lose one, then the advantage shifts. So if the Celtics, for example, lose one home game, they’ll have extra pressure. There’s a lot of pressure on the home team to never lose at home.”

Amidst the sound of basketball dribbles in the background at the Cebu Coliseum, where Coach Yayoy was at yesterday when I called, I asked about the league’s top player.

Kobe Bryant. How can the Celtics stop him?

“Before, the strategy of the Celtics was just that, ‘How to stop Kobe.’ But now, it’s changed. There’s Odom, Gasol, Fisher, and so many other international players with the Lakers. Now, it’s not only all about Kobe. Before, he’d score 60 points but the Lakers would still lose. Now he makes 32 and they win. He’s able to let his teammates contribute and let them score double figures. Now, it’s not all Kobe.”

Is it fair, I asked, to compare Kobe to Michael Jordan?

“Kobe started at a very young age,” Yayoy answered. “He wasn’t even in college yet when he joined the NBA. And still, he was very successful at a young age. But now, he’s even better. And so, yes, Kobe is emerging to be like Jordan.

“He has the will, the desire, the will to win championships like Jordan. I would also rate the clutch-shooting of Kobe to be like Jordan’s. He takes over in the end game—just like Jordan before. Look what Kobe did in San Antonio and against the Utah Jazz.

“But what he and the Lakers have realized is that if you don’t have a cast, you can’t win a championship. Same with Jordan before. Jordan would score 50, 60 points, but they’d still lose. It was only when his full cast was with him (Pippen and the others) that they won.”

“Winning in basketball is not just about one person.”

Well-said, coach. I can’t wait to watch the movie tomorrow.